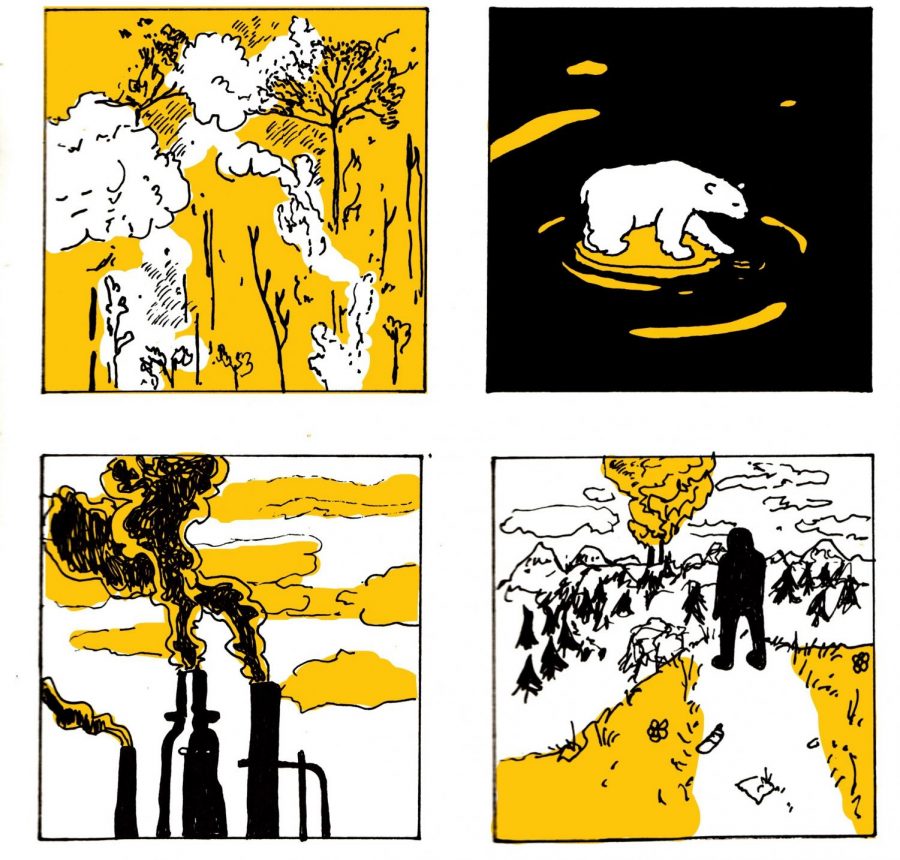 Learn while you can, party when convenient

I did not want to jump, yet I wanted more than ever to feel the crisp Oregon water swallow me whole. The rocks were uneven, my feet’s grip on the perforated cliff shaky and apprehensive. My heart raced and clawed its way up to my throat. I don’t usually let myself feel fear over something that can be remedied by a mere “f*ck it,” yet in this instance, it was hard not to.

Before my heart could leap out of my esophagus and try to stop me, off the cliff I went.

The idea that I can return to this lake in 30 years and still see it glimmering in the Oregon summer sun has become more fantasy than reality. It’s possible, sure, but what seems more possible is returning to a mud pool caused by years and years of drought due to increasing temperatures.

When discussing climate change at a reception for Commonwealth foreign ministers in June, Prince Charles said, “The next 18 months will decide our ability to keep climate change to survivable levels and to restore nature to the equilibrium we need for our survival.”

Prince Charles is not wrong to assume our survival as a species is in jeopardy. The Amazon rainforest burned for all of August without any sign of letting up. President Trump is intent on overturning forest preservation laws in Alaska to strip the land of resources. Autumn in Sonoma County is now known by its residents for fire instead of falling leaves.

Things are, well, bad. They’ve been bad, and according to World Wildlife Fund, if they continue to stay bad until 2050, sea levels will rise, coral bleaching will negatively impact ocean environments, the arctic will melt, extreme heat waves will affect billions, floods will be more prevalent and the loss of animal habitats will cause a halt in the adaptation of numerous species, especially those with backbones. And now, we’ve got 18 months to contain the flood. Cool.

So, if we’ve got 18 months to turn this ship around, and no one bothers to read the same directions, what’s to stop me from hauling my ass into a lifeboat and paddling to the party of self discovery?

If my future prospects didn’t matter at all, I would dance to my heart’s content in Havana, the flames of my textbooks illuminating the dance floor. I would walk along cobblestone streets in Milan, and buy clothes I couldn’t afford knowing that the rising sea level would catch up to me faster than my credit card debt.

But as much as I dream about the day I throw caution to the wind and turn the other cheek while the world aches, I’m not wired that way.

I want to experience the world while it’s still clutching its ever-delicate balance of divinity and destruction, and that’s something I can only do if I’m actively learning about issues that threaten the welfare of our ecosystem in a college environment. I want to see a world that still clutches onto its health.

I refuse to live a life that shuts me off from learning. In my eyes, choosing to not care about our environment is cowardice.

In my two years at Santa Rosa Junior College, the classes I’ve taken, the people I’ve spoken to and the trees I’ve walked by shaped my perspective on the world and the state of the natural environment. We’ve got 18 months to change the course of human history, and the only way to do this is by educating ourselves on how and why environmental devastation is occurring.

I know what you’re thinking. Sitting in sand-colored rooms with virtually no ventilation while spending hours slaving over assignments that feel designed to make you subservient doesn’t sound like the best ways to spend your youth. And it’s not.

But, if that’s all you’re gaining from your college experience, then perhaps you aren’t doing it right.

College is the ideal playground for those excited about the universe in general. Never again in life will you be surrounded by so many people with the tenacity to reach for new heights and the collective desire to make a difference.

When 2050 rolls around, I will be 51 years old. By the time I hit my golden years I want to know a thing or two about mother nature. The best way I can think to do that is to spend time in an environment where instructors constantly push the boundaries of critical thinking, science classes tackle real instances of climate change and political science classes illuminate the policies affecting our earth.

Each and every person on this earth has a unique connection to the soil. For me, when the water made contact with my skin in that Oregon lake, my fear melted away. For a moment, I dove deep and felt nothing but the quiet chill of excitement and the emptiness in my lungs.

I love the world, and I swear it loves me back. I yearn to see everything it has to offer me, but if I’m unable to understand the environment’s hardships then I don’t believe I’m getting the full picture. To be in a relationship with the environment, we must educate ourselves about its highs and lows. It’s as intimate as any relationship can be, and when we turn our back on that, nobody wins. The plants cease to grow, ice continues to melt, we lose our way and uneducated we stay.