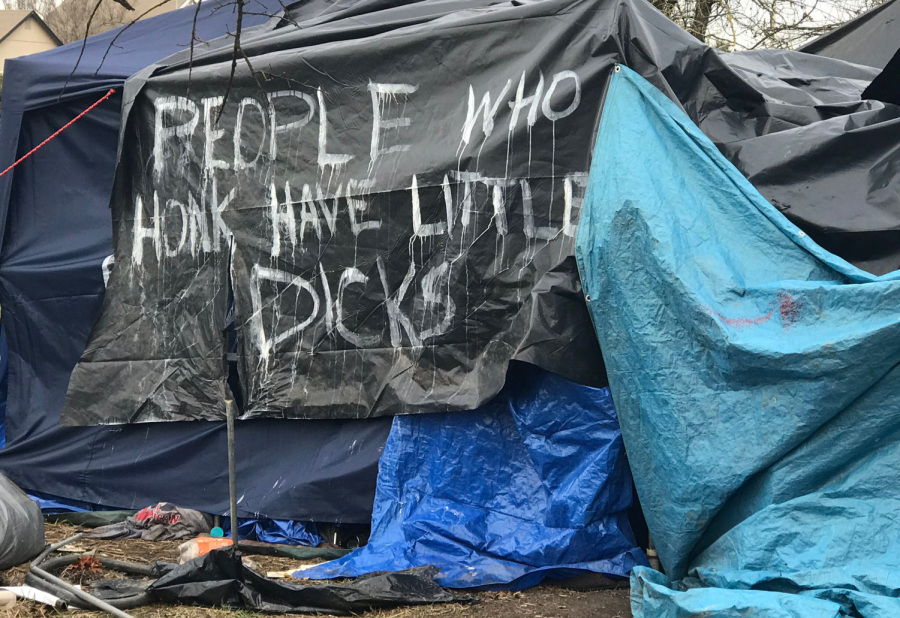 A Joe Rodota Trail resident makes his opinion of the noise pollution known with this message facing passing traffic: “PEOPLE WHO HONK HAVE LITTLE DICKS.”

The sounds of the Joe Rodota Trail

Imagine you’re settling down for a night’s rest after a long day. Your body aches. A foul stench permeates your tent. You’re yearning for a moment of peace.

“VROOM!” roars a semi as it barrels down Highway 12.

“CHOP! CHOP! CHOP!” screams a helicopter as it flies overhead.

The Joe Rodota trail is well publicized as a dirty, unsanitary, unforgivable place, one with a lifestyle that wears away at its residents. But a less discussed — yet equally damaging — facet of life on the trail is the noise.

“It gives me bad anxiety when cars drive by,” said David, a trail resident.

The thunderous sounds of Highway 12 can be heard at all parts of the trail and at all hours of the day.

One woman on the trail, Christina, said she hates the sound of the highway.

Christina and David have both done stints in jail and each found comparisons between life behind bars and life on the Joe Rodota trail.

“There was a lot of yelling [in jail],” Christina said. “Here, people are yelling out of their cars at us and honking.”

“[Jail] didn’t sound good,” David said. “They would open the doors and shout one-word commands at us.”

Merry, another woman on the trail, said for her, the traffic drowns out all other noise.

“I hate when people honk their horns. So frickin’ annoying!” Merry said. “Makes me wanna take a paintball gun and shoot their cars.”

A sign outside one resident’s home reads “people who honk have little dicks”; another sign reads “Honk if you hate capitalism.”

Even when no one is honking, the sounds of the trail register between 80-90 decibels according to Decibel, an iPhone sound meter app. Exposure to sounds louder than 85 decibels for extended periods can cause permanent hearing loss, according to the American Academy of Audiology.

But the whir of traffic and the beat of helicopter blades aren’t the only sounds residents hear. Others are more pleasant and provide a soundtrack-of-sorts to their lives.

Headphones, earbuds and Bluetooth speakers are ubiquitous; instruments are easily picked out among the din.

Solo, a man who shares his temporary home with another resident, said the trail is full of the music of different cultures. Some nights, you can hear drumming.

“Music is the way,” Solo said. It is one of the few ways overwhelmed residents escape the harsh sounds of the trail.

Despite the push-and-pull between the county’s relocation efforts and the homeless’ refusal to move, some residents have started to leave on their own accord, all thanks to the trail’s poor auditory conditions.

“I had to move off the trail because of the noise,” David said. “Now I go to sleep in the boonies, with the sounds of the birds and the frogs.”