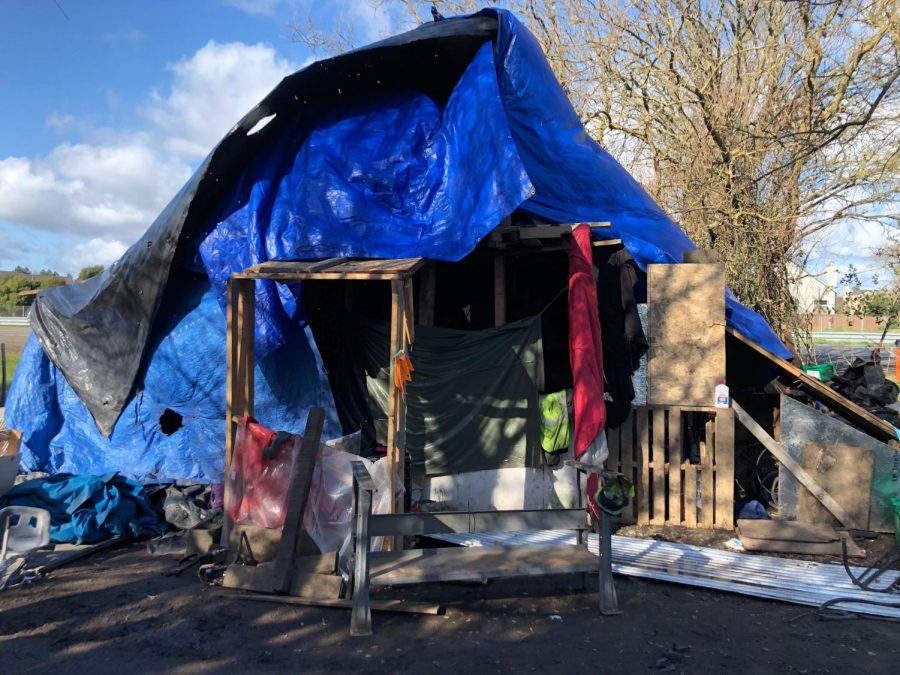 A two-story structure on the trail has taken its resident months to perfect.

On the Joe Rodota trail, a strong shelter makes all the difference in the world. In Sonoma County’s largest unofficial homeless encampment, there are dozens of different styles of shelter. Though the primary goal is to build a safe and comfortable structure, residents’ creativity shines through in the ways they decorate and design their homes.

Most people on the trail employ a similar strategy. They create one or multiple tents by propping up tarps or plastic wrap on any open space along the trail. However, other residents choose their tent plots with a careful attack plan, keeping in mind the elements or their neighbors, and some residents build with more complexity.

Steve has been on the trail for a couple of months and has a simple yet effective structure he works on to stay comfortable.

“It’s simple really, just a three-ring tent with a heavy, industrial tarp over it to keep rain out,” Steve said. “The palettes underneath are the key though; I’d be swimming all night if I didn’t have them.”

The trail’s topography plays a vital role in influencing where its inhabitants decide to build their structures. The trail runs over flat ground, and it doesn’t filter water very efficiently. To combat this, some residents build on top of palettes — some build two story structures. Others, like Mousey, 33, use a different strategy.

“It’s just on the ground, so it’s risky,” Mousey said. “I just use a shovel to hollow it out every couple days and it works out.”

Mousey’s structure is one of the more unique living spaces on the trail. It’s one story and, at first glance, isn’t as jaw-dropping as the two-story buildings with multiple generators, but a second look allows its complexity and decor to pop.

His tents are covered with a combination of tarp and canvas, and a white picket fence encompasses his area. Empty upturned Lagunitas beer bottles border his structure in a simple, yet calculated manner.

Mousey, homeless for over 16 years, has a sense of style and care that is evident in the design of his temporary home.

A striking insignia — a crest of sorts — is painted on the door to his main tent. Of Mousey’s design, the sign features four Fs, meant to represent “friends, family, freedom forever.” He has the same insignia tattooed on his upper arm.

“It’s just something I came up with a long time ago,” Mousey said. “I have four brothers, so the four dots at the top represent my family. Also the four Fs join in a cross between the dots. That’s because my mom was a very religious woman, so the cross kind of represents my mom.”

It may be unexpected that something so poignant could be featured as a decoration in a homeless encampment, but similar pieces are presented all along the trail.

One of the most impressive works of art is architectural. Isolated in an approximately 50-yard-long section off the trail is the largest structure in the entire camp. Though the designer was unavailable, others commented on his complex design.

“Yeah man, he’s been working on that every day,” said Steve. “It’s all he does every day, just adds something to his house and then disappears for a while.”

The structure stands two stories, both around the size of an average suburban American home. Four massive tarps cover the entirety of the structure, with a living area on the bottom floor and a bedroom on the top. A generator on the inside runs power to several neighbors, a frequent sight on the trail.

Posts and PVC pipe support the tarps, and it’s plain to see that the designer has some experience in architecture. Perhaps the most intriguing piece of the structure is the home-built ramp that leads from the outside to the top story.

“That’s my friend’s place,” Mousey said. “He’s put in a lot of work over there.”

That hard work begins long before the construction phase, when residents choose the exact location of their camp, some for reasons like drainage, others for more sentimental reasons.

Some have family or friends on the trail and set up familial neighborhoods of up to five or six structures long. Others choose the slightly higher ground for other reasons.

“I was living here for a while then I found out I have a couple cousins over here, so I packed up and moved,” said Sam.

“Family is the whole reason I chose my location.” 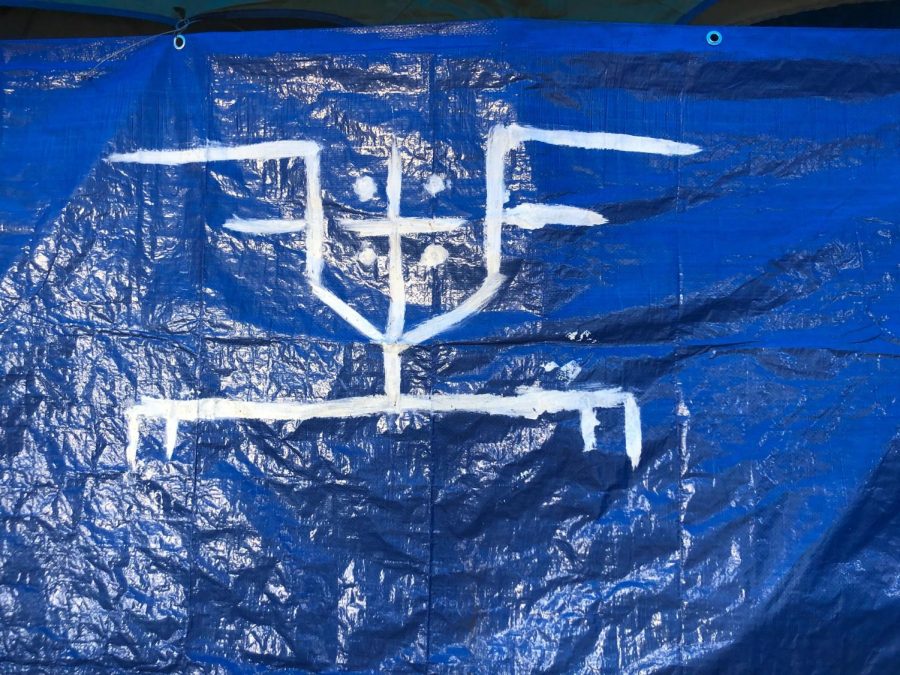