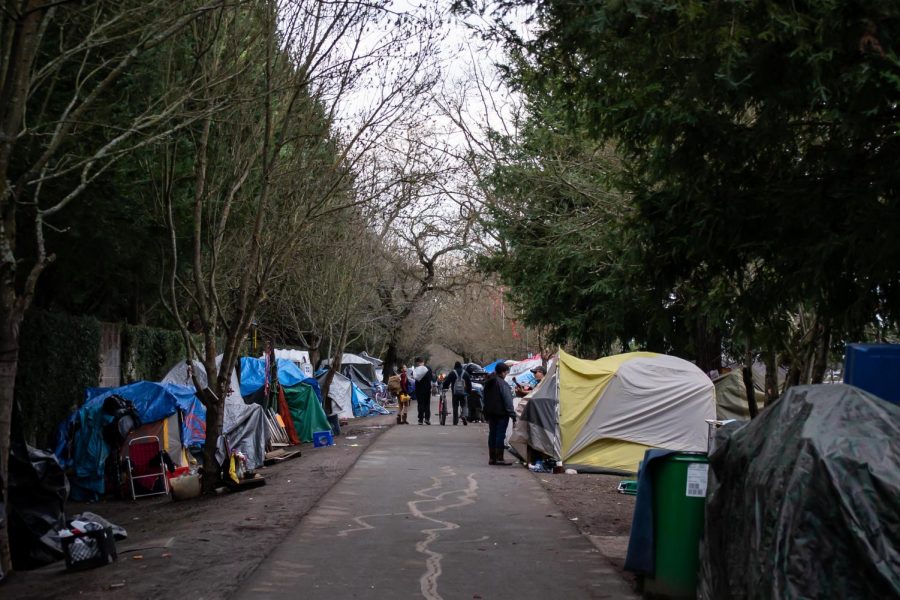 The Joe Rodota Trail homeless encampment is unofficial home to over 200 people.

I went down to the homeless encampment on the Joe Rodota Trail yesterday and handed out a case of candy bars. It was a good excuse to get out of the house and do something worthwhile for a change. I talked in-depth to one couple and got to see firsthand how people are living there. It was a dirty, smelly, grim experience — except for the smiles and the conversation. And, yes, the smiles and conversation made it well worth it.

Smiles are important. I know, because I spend much of my time alone, and when I’m alone, I’m joyless. It’s only through contact with humans and animals that I feel joy and smile. Not only do I enjoy smiling, but it gives meaning to my life to bring happiness to others. These are not empty words — I really mean them.

The first thing I saw when I finally set foot on the trail was a large rat huddled near some stacked tires next to a tent. It paid no mind to the steady flow of people walking by a few feet away. I’m frightened of rats and was disturbed by the sight, especially in a scene of such filth. Trash was strewn in random piles and the smell of rot permeated the air. As I continued down the trail I noticed many plastic traps set on either side, in keeping with the City of Santa Rosa’s recent and much-advertised rodent-control efforts.

My MO on the trail was to simply say “Hello!” to each homeless person I passed, hold up a chocolate bar, ask them if they’d like one and hand it to them. Kids could tame dragons with this technique. I was greeted with everything from “God bless” to “Thanks” — and a multitude of smiles.

Word is that the trail encampment officially started after the closing of the nearby Dollar Tree encampment in April 2018, when displaced homeless people were forced to set up tents elsewhere. I can’t recall noticing it until a few months ago, probably in September or October of 2019, when it seemed to appear overnight and grow exponentially along Highway 12 at the rate of a few new tents per week.

My attempts at tent-counting while driving by at 60 mph always ended at about 100, leaving me to guess there were at least 150, possibly 200 tents in total. Officially, there are now 210 people living there, 60 more than the official 150 at Dollar Tree. I suppose the numbers are accurate — I don’t know. I’m not sure the city is capable of portraying any aspect of this situation in an accurate light.

I spend a lot of time thinking about the homeless and what can be done to help them. I feel powerless to effect any change in the world when it comes to politics, and when I see the job the county is doing at addressing the issue, I’m stunned into inaction. I get so angry I can’t even write a letter to complain, knowing my opinion will do nothing.  I’m an emotional person and what comes naturally to me is to want to spread good cheer, or in this case, candy bars.

Clearly, I’m not solving the problem of homelessness. Nor is it feasible that I, a single person, can. But if we each do something to address the problem — the crisis — together, we can eradicate the problem, or at least affect it substantially.

In America, to be homeless is to cease being human.

The homeless, having fallen through the cracks of our social structure, no longer exist. I’m told the one thing homeless people want most is to be recognized as being actual people, and one way to do that is to call them by their names. Handing out candy bars is my way of addressing them as human beings. It doesn’t get them off the streets, but reminding them that they are human and that other humans appreciate and acknowledge them serves an important purpose. That’s the small role I choose to play.

In today’s society we are subtly and not-so-subtly pressured to not help the homeless. They are vilified. We are told that they cost society in all ways — from scaring away business downtown to draining valuable government coffers — and that they are responsible for their plight. To help them is to enable them.

I disagree. They are responsible to varying degrees for their plight, just as society and everyone in it is responsible for helping, or not helping them, out of it. Truth is, some people need a helping hand to get back on track. Maybe many helping hands. They’ve lost their way in life. To help them is…to help them.

And maybe it’s not my job to allocate public funds to set them up with port-a-potties. Maybe I’m here to put a little pep in their step. Let them know they are not alone, that someone cares. Maybe it’s these things that help lift their spirits so they can stay human. Maybe if we each did something, we could, together, lift them out of their situation. We have nothing to lose. Let’s give it a try, shall we?

When all is said and done, a candy bar won’t change the world. But if it reminds a destitute soul they are loved, it’s been put to good use.

Mark Fernquest talks to the homeless and (sometimes) hands out candy bars in his spare time.