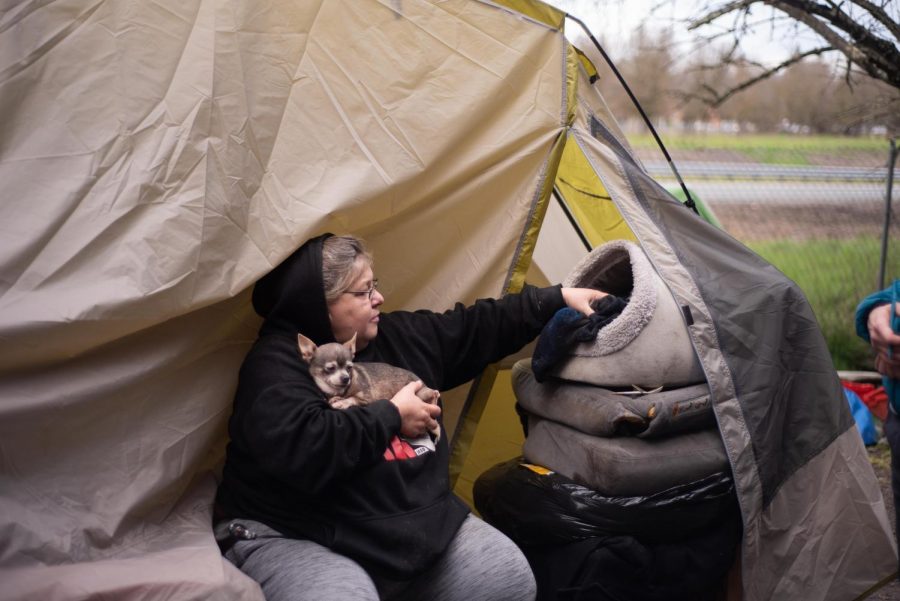 Tina, 50, sits with her chihuahua in her camp on the Joe Rodota Trail.

Three years ago, feeling despondent, Tina, 50, planned to dress in black and walk in front of a semi truck that night. Fate intervened when a friend found a stray Chihuahua and gave it to her, saying, “You need it as much as it needs you.”

She named her Little Momma because the dog barked after Tina whenever she left her tent.

Tina, who has been homeless on and off for 27 years, now lives on the Joe Rodota Trail with Little Momma. “She saved me,” Tina says.

Tina said she doesn’t want to go the new shelter at Los Guilicos because it feels like “jail” with a 7 p.m. curfew and no visitors allowed. It is a temporary solution to a long-term problem, Tina says. She feels like she has no say or voice in what the city plans for the area and the people living there. She says, “They’re not asking us nothing, they’re just telling us.”

If it were up to her, Tina would travel across the country. She’d love to have an RV so she could travel everywhere with Little Momma. When asked what place she would visit first, Tina said Doran Beach in Bodega Bay because it reminds her of the quality time she spent camping there with her brother and father, both now deceased.