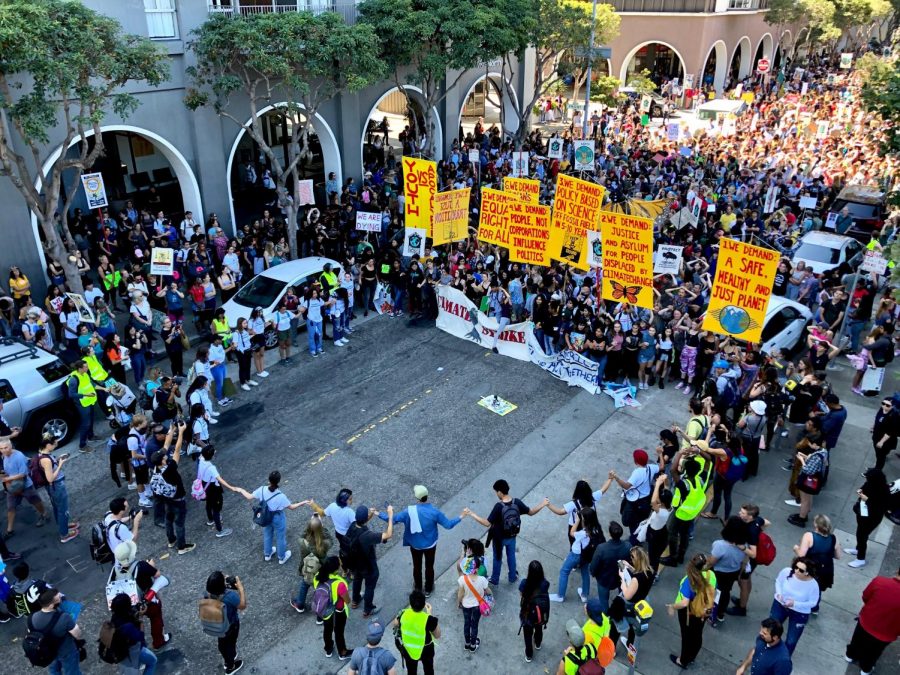 Thousands of strikers pause to partake in a national moment of silence, then join together for a song of climate action.

Young people across the Bay Area skipped classes Sept. 20 and descended upon the streets of San Francisco as part of a global climate strike to demand a habitable Earth and livable future.

Pelosi’s office was the first stop of seven, where protesters demanded a Green New Deal, along with the San Francisco locations of global investment corporation BlackRock, Amazon, PG&E and I.C.E.

Thousands surrounded the various locations, chanting, “PG&E, no more greed. We should own our energy!” and, “Close the camps!”

At one point they yelled, “BlackRock, shame on you!” while flooding the office’s entrance, with some activists tagging the area with chalk. Others gave obscene gestures towards BlackRock employees watching from windows above.

Clarke listed the demands of the climate movement, which included immigration reform and lifting up minority communities.

The mass of students, parents and activists cried with fervor, “We want climate justice!”

Protesters gathered at 10 a.m. at the San Francisco Federal Building and the march ended with a rally in Embarcadero Plaza with live performances and guest speakers.

En route to Embarcadero Plaza, the massive crowd paused to join a national moment of silence. Afterwards, thousands joined in a song of action.

“I’m here as an indigenous woman, making sure that our voices are heard and that we continue to let folks know that our communities, our indigenous communities, are being affected at great numbers and we need solidarity on all fronts,” said Noemi Tüngui, an indigenous activist at the rally.

“This will cause genocide,” activists said of the bill.

At the rally after the march, student dance groups and school bands performed before a large gathering across the street from the Ferry Building.

“Oh we hype-hype out here!” Clarke said into the microphone, while music played through a bicycle-powered speaker system in the background.

The strike showed the passion and anger of young people whose futures are being threatened.

At the rally following the strike, the liveliness of the youth-driven movement was apparent, as students danced and sang in a massive display of civil disobedience and community.