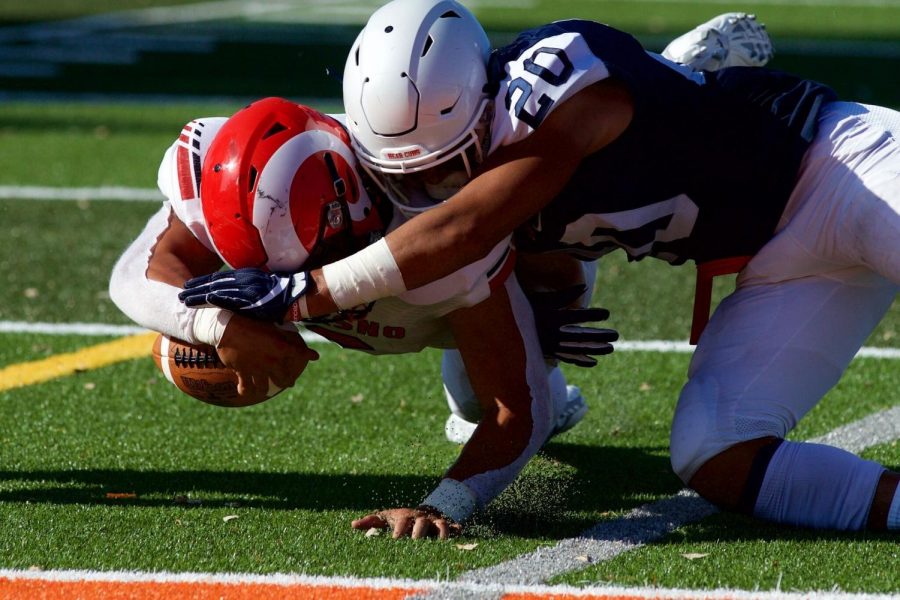 SRJC safety Kasey Kikuyama demonstrates a perfect form tackle against Fresno College Sept. 7. Though there is slight helmet to helmet contact, Kikuyama leads with his shoulder and wraps up nicely.

Football constantly changes on both sides of the ball. Tackling mechanics have changed how defenses play, and a shift away from the run game has changed offensive philosophy. As the game evolves, players and coaches are forced to adapt or get out.

Research on chronic traumatic encephalopathy, or CTE, and other brain injuries caused an in-depth look at tackles. Less than a decade ago, helmet-to-helmet hits were legal. Now, leading with your helmet on a tackle is an automatic ejection at the college level; in the NFL, a 15-yard unnecessary roughness penalty results in a hefty fine of up to $75,000.

Coaches teach players to lead with the shoulder and wrap up with the arms as the correct form, and this instruction begins at the lowest levels of football.

At every level of football, defensive penalties are at an all-time high and it’s truly difficult to cover or tackle without drawing a flag.

In 2010, NFL teams averaged five unnecessary roughness penalty per season. Fast forward to 2019, and that number jumped to almost seven.

The offensive game looks very different than five years ago when, teams lined up in the I-formation to run the ball up the middle of the defense.

Today, the majority of teams operate primarily out of the shotgun, employ zone reads and run-pass options to move the ball on the ground.

Teams have slowly moved away from running the ball in favor of downfield passing. In 2010, then San Diego Chargers quarterback Philip Rivers led the NFL with 4710 passing yards.

In 2010, seven running backs carried the ball more than 300 times; Atlanta Falcons’ bruiser Michael Turner led the league with 334. In 2018, Ezekiel Elliott of the Dallas Cowboys was the only player to log more than 300 carries with 304.

SRJC tight end running back Sadik Ali sees the games changes as affecting the ‘glory positions’ of the sport.

“In the ‘90s it was [Barry] Sanders and Emmitt Smith getting all the hype,” he said, naming two of the league’s all time best runners. “Now it’s the Odell [Beckham] and Julio Jones hype train every year.”

Beckham and Jones are two of the leading wide receivers; a position that is reliant on a teams decision to pass.

The shift away from classic run formations hasn’t been easy on offensive coordinators.

Even teams that like to run the ball do it differently than teams of the past. A lot of pressure falls on quarterbacks to power the run game, especially at the college level. Teams like to open up the field with run-pass options. This sets up easy play action passes and takes pressure off the offensive line.

For the Bear Cubs, this is no different. Quarterback Will Heckman has more carries than any other running back on the roster with 97. He’s also leading the team with seven rushing touchdowns, something that would have been unheard of 10 years ago.

Other Bear Cubs have been forced to adapt to the quarterback-centric style. Running back Kenneth Fitzgerald has thrown 22 passes this year, after

attempting none before this season.

Though position switches from quarterback to running back are standard, the opposite is unprecedented.

“It’s just about adapting,” Fitzgerald said. “Football is different now. There isn’t room for five or six [running] backs on every roster. You have to be willing to change.”