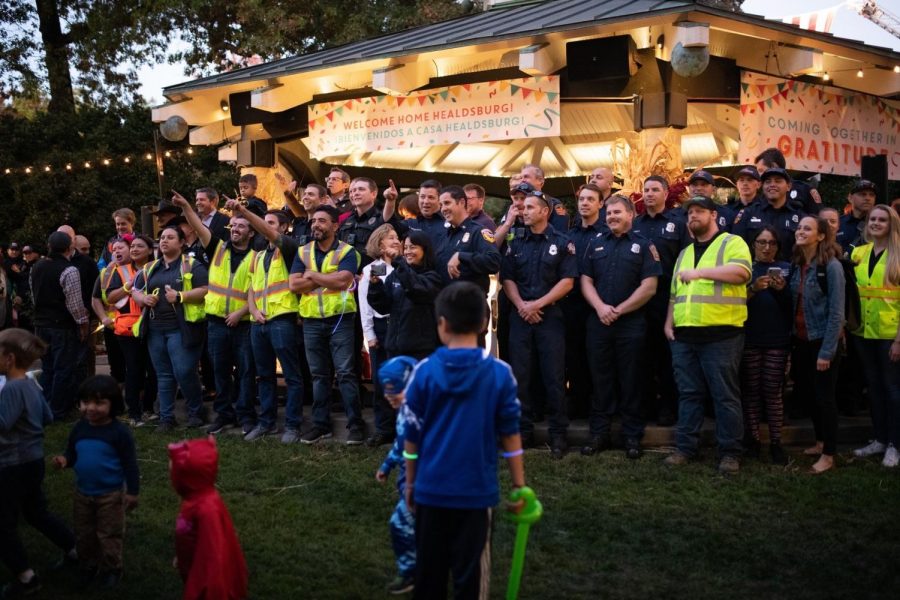 Photo by City of Healdsburg

Firefighters, police officers and Healdsburg city staff gather Friday, Nov. 8 at the Healdsburg Plaza on the night of “Coming Together in Gratitude,” days after the Kincade Fire.

Evacuating Healdsburg: My experience fleeing home during the Kincade Fire

I had tears streaming down my face and my hands were shaking — I feared what would come next. Healdsburg was under mandatory evacuation. I wondered if it would burst into flames and if I would return to a pile of ash instead of my hometown.

The Kincade Fire started at 9:27 p.m. Oct. 23 near Geyserville and soon grew into one of the largest fires ever in Sonoma County, one that caused the historic mass evacuations of 200,000 people in Sonoma County. Healdsburg, my hometown, was among the first towns evacuated.

On Friday, Oct. 25, I went to work at 8:30 p.m. at the Healdsburg Community Center, an evacuation shelter that opened 48 hours earlier when the Kincade Fire threatened the town of Geyserville. I was scheduled to work overnight, until 8 a.m. Saturday. Things didn’t go as planned; Healdsburg was covered in ash, and the fire was less than 5 miles away.

A shift change was scheduled for 8 a.m. Saturday, but our supervisor told us to wait. “We need to be prepared for anything,” she said. We speculated the shelter might be evacuated soon. Ten minutes later, my supervisor came over and asked, “Do you have gas in your car? If not, go and fill up your tank right now.”

I rushed to the gas station and waited in line behind eight other cars, growing more nervous with each passing minute. I filled up my tank and returned to the evacuation center where my coworker said, “Healdsburg and Windsor are about to be a mandatory evacuation zone.” My heart dropped.

I couldn’t even imagine what was about to happen to our small town as shifting winds blew the fire towards us.

I grabbed my phone and started a group chat with family members.

Then I called them and told them to leave work, go home and pack because Healdsburg and Windsor were going to be evacuated.

My sister-in-law heard the panic in my voice and asked, “Are you OK?” I paused and took a deep breath, feeling the tears in my eyes and a lump in my throat. “I don’t know,” I said. She told me to calm down and said everything was going to be OK.

I was scared and nervous but I knew I couldn’t show those emotions to the evacuees in the shelter.

I looked around the room and everyone started to panic. People began calling their family members, many in tears because they were now going to have to evacuate twice. The evacuees began heading to their rooms to gather belongings.

Friends called me to ask if it was true and if we had to leave our homes. I told everyone yes and to leave now.

By 11:30 a.m. the Healdsburg shelter was empty. I was called to go to the Emergency Operation Center to help bring food, water and snacks to police and staff.

I drove around town and noticed it was empty except for terrified people driving in cars filled with clothes, blankets and personal belongings. Smoke was everywhere; people were wearing masks. At 2:30 p.m. my dad called and said, “You need to come home. We are leaving now.”

I raced home, packed my belongings in 10 minutes and began driving south toward relatives who lived out of town. I didn’t know how long I was going to stay with them; it could be days or months.

Memories of Healdsburg raced through my mind. It was possible my elementary, middle and high schools and my cheerleading gym — all of the places where I’d spent my life — might burn down.

Three hours later, I arrived in Suisun City where my aunts, uncles and cousins from Healdsburg and Windsor were all gathered. Everyone was scared, and everyone wanted to go back home.

Saturday night was going to be difficult — with 100 mph Diablo winds predicted, the worst since the 2017 Wine Country fires. On Sunday, we would find out whether Healdsburg was still standing. No one could sleep; we were too scared watching updates on our phones and TVs.

Sunday morning we were relieved to learn Healdsburg was OK, but it was still under mandatory evacuation. No one could enter the town because of high winds and continued fire danger.

On Wednesday, authorities downgraded the mandatory evacuation to an advisory, and my family and I returned home. When I arrived, I headed to the senior center to welcome residents back on Healdsburg Avenue.

When I arrived, I put on my city vest and walked to Healdsburg Avenue where other city employees were gathered. We started shouting, “Welcome!” to all the cars returning to town. Watching residents return with smiles on their faces made me realize how important this town is to me and everyone who lives here.

We were lucky Healdsburg was saved by the hard-working firefighters who kept the flames at bay. We were lucky the town evacuation order was issued with time to spare so we could pack our most-important belongings. Most of all, we were lucky to still have homes to return to.