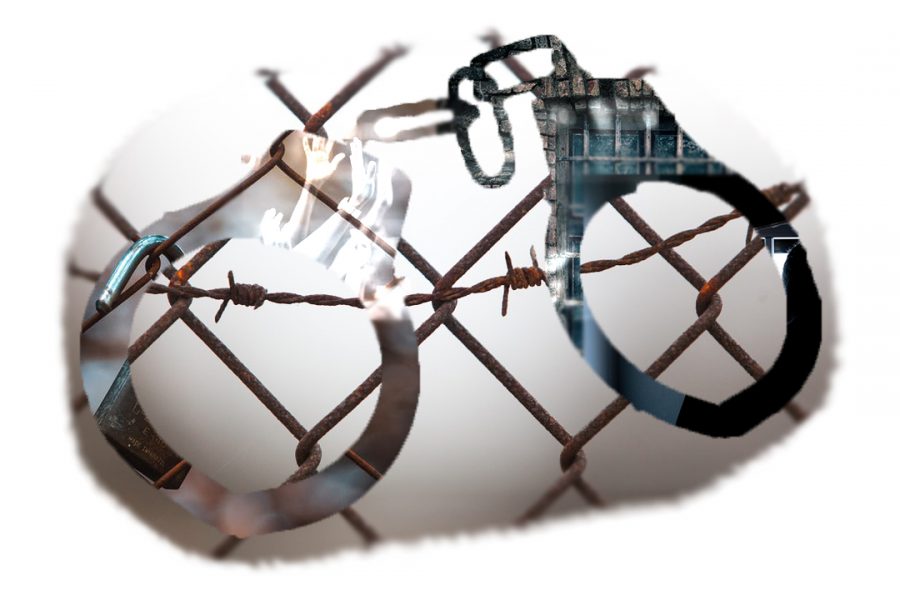 Carceral state: The prison industrial complex wasn’t the solution for my mom

The first time my mom was incarcerated — for vandalizing public property — I counted the approximately 730 days until she’d get out.

Every weekend I got used to the dehumanizing routine. I checked my pockets for contraband, made sure my clothes followed the dress code, walked into the crowded waiting room, lined up and passed through a metal detector.

Then, I entered a labyrinth of corridors and searched for her module, stepped into the metal room and waited patiently for her behind the glass barrier.

I couldn’t wait to reconnect with her after she finished her sentence, when she’d never live behind walls again.

During our visits behind bars, we discussed a future where we could pick her up on her late night release day and celebrate by going out to eat at a Japanese restaurant and catching an action flick.

We were excited to rebuild our relationship and create positive memories, especially after realizing all the new opportunities to see each other we took for granted before her arrest.

Fast forward a couple of months after her release.

Although she was in a program intended to help her reintegrate, she struggled to find housing and mental stability without therapy or access to healthcare.

Soon, she believed continuing to actually live outside the conditions of jail was impossible.

The last time I saw her was to take her to a doctor’s appointment and pick her up some medication with my dad.

When we returned to the parking lot of her transitional housing, I could tell something was wrong. She felt overwhelmed shouldering the weight of her recovery and explained how giving in and going back to jail might be easier.

I hoped to change her heart and mind. I said something to the effect of, “Don’t leave me again. It’s been too hard.”

I shared how emotionally taxing it was to visit and see her suffer, but her frustration in that moment still won. She said she’d rather go back. I was crushed.

She was so desperate to be sent back that within days, she committed a felony — not vandalizing public property this time  —  and was sentenced to serve at a state prison 200 miles away, too far for me to visit.

I was young, but I remember struggling to understand how she arrived at her decision.

What I didn’t realize as an adolescent was that an intersection of social factors set her up for failure and deprived her of the help she needed.

In jail, yes, she was punished, but she also never received therapy or gained any strategies to help build strength mentally and be a productive member of society after her sentence.

Her addiction was disregarded and criminalized. She wasn’t connected with supportive forces outside of jail. Every aspect was designed to be punitive; none were rehabilitative.

Sadly, my experience has become more common as more children grow up with parents imprisoned in the well-oiled machine of the Prison Industrial Complex (PIC).

According to “Shared Sentence,” a recent report by the Annie E. Casey Foundation, 1 in 28 children has a parent imprisoned in the U.S. and 54% of inmates have kids.

In fact, the U.S. imprisons more people than anywhere else.

A 2016 Bureau of Justice report states the U.S. holds more than 2.3 million adults behind bars and even five years after being released, more than 80% return.

Why does the U.S. hold a quarter of all prisoners on Earth, despite encompassing only 5% of its population?

Perhaps the history of the PIC can help us understand why it maintains institutionalized slavery and oppresses marginalized members of society.

Our prison system’s roots in white supremacy and colonization illuminate why the policies and logic surrounding our prison system are biased and why 60% of prisoners are people of color.

A 2017 article from Al Jazeera explains legislation since the 13th Amendment, which abolished the institution of slavery, underhandedly paving the way for our PIC by allowing servitude as punishment for crime.

With the country’s economy suffering after the Civil War, Southern prisons were used to control recently emancipated slaves and exploit them through the “convict lease system,” which sold prisoners to work in mines and on railroads and plantations.

In the 1980s, the Nixon Administration’s War on Drugs sent the number of black and brown prisoners skyrocketing again.

According to the criminal justice reform organization Sentencing Project, the prison population increased 600% and the number of minor non-violent offenses eligible for jail time also increased.

Then, the Reagan Administration cut more rehabilitative social programs, so prisoners didn’t get needed skills, support or training inside or outside of jail to assist them in joining society.

While the history of the PIC is complicated, these events do shed light on the capitalistic motivations for people in power to imprison others, which dictates that for-profit prisons need prisoners to make money, thus the advocacy for stricter laws and mandatory sentences.

Who ends up in prison is often not a matter of justice or danger, so much as it is being part of a targeted racial group, economic class or marginalized identity.

For example, the NAACP Criminal Justice Fact Sheet cites how black people are incarcerated six times more often than their white counterparts for the same charges.

Moreover, if black and Latinx people were incarcerated at the same rate as white people, prison and jail populations would decrease by 40%.

Yet most prisoners aren’t aware of these systemic flaws that oppress their lives. Instead, people like my mom internalize the blame.

Conditions have to change. We must be able to imagine a world without prisons.

A support system that humanizes those with mental illness or addiction within jails and offers them comprehensive therapy and treatment does not exist.

So, rather than trying to reform these dehumanizing institutions, we should invest in other social systems to keep people out.

According to the Bureau of Justice, the annual cost of U.S. mass incarceration is at least $81 billion. The Legislative Analyst’s Office adds how, in the state of California, it costs $81,000 annually to imprison a woman like my mom.

I invite you to consider the radically different support systems we could create with these funds.

For example, in the first year of her sentence, my mom could have received comprehensive emotional therapy for $50 to $250 per hour-long session.

According to the National Institute on Drug Abuse, she could have gone through an addiction treatment program for $4,500.

She could even receive a full-time education at $1,300 per year to prepare her for a career when she got out.

Rather than criminalizing them, we should take those who should never have been there in the first place — those struggling with mental illness, addiction or poverty — and invest in resources like housing, healthcare and education to negate a purely draconian system like prison.

If we look beyond our own borders, we see more effective “prison” models already exist.

In Norway, prison isn’t for violence and profit; the only punishment is a withdrawal from society without depriving people of their humanity.

Even those convicted of heinous crimes can be redeemed to some capacity.

Prisoners can lock the doors to rooms with all the amenities of home; they can walk, bike and swim on the grounds and visit family on holiday.

To us in the U.S. it’s unthinkable, but this humanizing and compassionate approach is effective.

One in five Norwegian prisoners return after release, compared to three of every four American prisoners.

While I advocate for the abolishment of the Prison Industrial Complex, I acknowledge dismantling it will be an arduous journey.

In the meantime, we should rethink how we treat prisoners and the system that dehumanizes them and their families.

Abolition is rooted in the idea that each prisoner’s life is valuable and redeemable to some capacity, and eliminating prison would immensely transform society and how we think of punishment.

We should envision better alternatives and recognize the capitalistic Prison Industrial Complex has no place in the world we want to build for ourselves moving forward.

The state of California took a first step by banning privatized prisons and immigrant detention centers when Assembly Bill 32 passed — in October.

Many other states won’t be in favor of this idea, or claim it’s to radical to work. “Of course society needs prisons!” they’ll say. “Without them, we’d have rapists and murderers rampant in the streets.”

These examples of the most egregious offenders miss the point.

Some form of alternative punishment may still have a place in the world once our system is changed, but we must acknowledge the dire human-rights issues behind bars and come to terms with their failure to reduce public crime or enhance safety.

It’s been years since I’ve had a relationship with my mom. Given our physical distance, we rarely communicate.

The truth is, I’m unsure how much of a relationship is possible between us, given how long it’s been. When I revisit her letters, it’s clear how she needed more support than I alone could give her. I wish we had a better relationship — then and now.

Earlier this year, I received a letter from her. It echoes the themes of violence and isolation inseparable from the function of jails. She wrote about being attacked by another prisoner —  severely enough to be hospitalized —  and every time I read it, I can’t help but mourn for her and ruminate over the broken system that separates us.

Those with addiction and mental health issues should not be sent to prison. Those who exist in oppressed groups shouldn’t be locked up.

If there were another supportive and rehabilitative system in place, it’s likely my mom would have become a productive member of society — and my life — again.