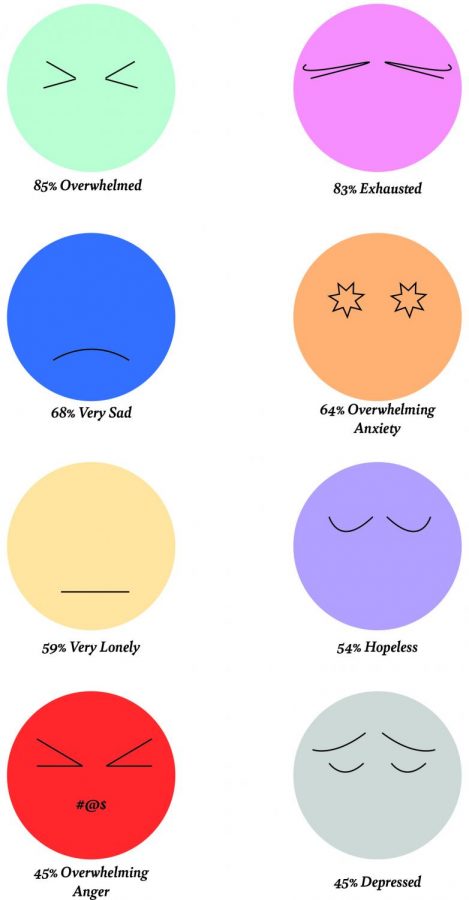 SRJC conducted a survey last spring asking students to report on their mental health during the last 12 months..

The statistics are alarming.

As students grapple with financial, emotional and educational stress, SRJC officials responded with a newly reformed rapid-response team to deal with potential crises on campus.

The B-CARE team — an acronym for consultation, assessment, response and education — is prepared to provide resources and support to ensure anyone in distress has the proper help.

With the risks of conflict, school shootings and student self-harm seemingly on the rise, SRJC District Police and Student Services combined forces to address problems distressed students face on campus.

When the anti-abortion advocacy group Project Truth came to campus in October, B-CARE was out in full force. Dean of Students Robert Ethington and District Police Chief Robert Brownlee were on scene with other officers and faculty to perform peacekeeping measures or duties and ensure safety and civility.

When an SRJC student assaulted one of the Project Truth members, B-CARE acted in seconds to restrain the student and de-escalate the situation.

B-CARE provides an outlet for students or faculty to anonymously report any sort of uneasy behavior or concerns. The program began in the early ‘90s as SRJC Crisis Response.

“It used to be geared more toward staff and faculty concerned about a student,” Epstein said. “In the last year or two we have expanded the emphasis to include students using the team [who are] concerned about another student.”

Comprised of 15 team members between Santa Rosa and Petaluma campuses, B-CARE consults and assesses those in need and guides them to the proper resources they need to overcome their crisis.

Depending on the severity of the issue, the specific team member most knowledgeable in certain circumstances will respond.

The anonymous reports can range from mental health-related to common school struggles; however, the focus of B-CARE remains rapid response to active situations, rather than counseling.

Those seeking counseling will be directed to the proper channels.

“We’re the eyes on the street. We’re watching for things that may be unsafe or need support then addressing them real-time,” Ethington said. The B-CARE team members take every concern very seriously.

“We really want this to be a safe place, and it’s not going to be completely safe. It’s just a crazy world we live in,” Ethington said “If we can let folks know we’re here to support them, that goes a long way into creating a culture of safety.”

Although B-CARE doesn’t have much recognition yet among students, one of the team’s main goals is to get the word out.

Because of the confidentiality of these reports, B-CARE is able to keep tabs on student concerns and can decide the best method for working them out.

“We can’t force a student [to reach out for help] but we can definitely reach out to a student and let them know it’s confidential and everything that’s available to them,” Ethington said.

This approach is markedly different from 20 years ago, when mental illness was often swept under the rug.

Mental health is becoming less taboo to talk about among younger generations. The stigma is wearing off, and the B-CARE program’s open strategy is achieving lots of positive outcomes.

Roughly 150 reports are sent in each year, and the results are beneficial.

As a result there are still repeat students who need attention, as well as those choosing not to reach out.

To date, no fraudulent reports have been filed, which Ethington attributes to the realization that false reporting is in poor taste.

“Maybe once students become more aware they can file a report, there could be a false one. But I think 99.9% take it seriously,” he said.

Many students do take it seriously.

“I think that the more help available, the more people will be willing to bring it up [in conversation],” said SRJC freshman Maisie French.