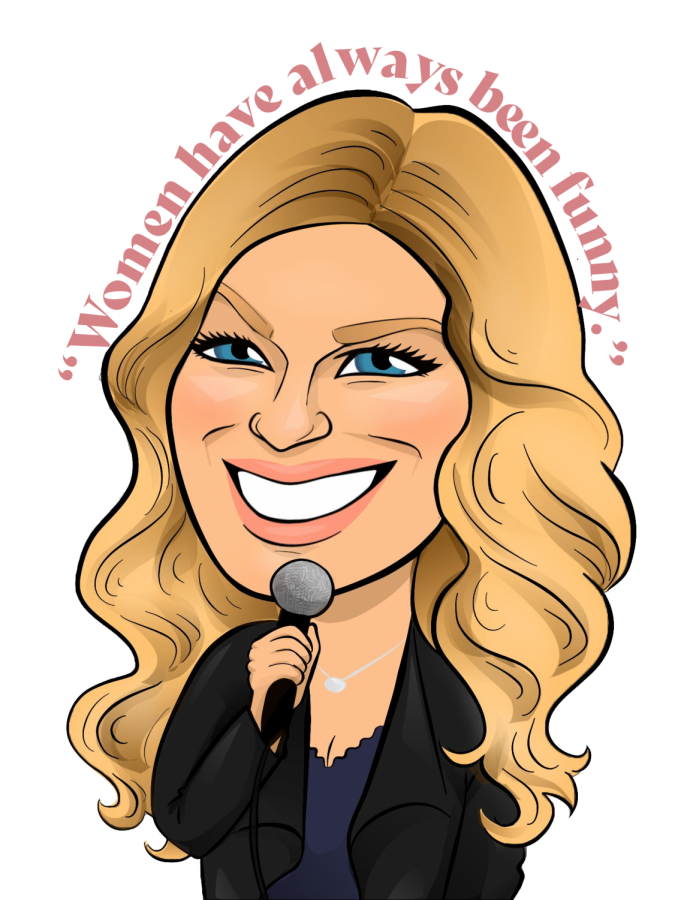 Winning was the last thing on Gina Stahl-Haven’s mind as she stepped on stage for the finals of the San Francisco Comedy Competition. In her mind, she had already won.

Jokes come naturally to Stahl-Haven. As she stepped onto the stage, all of the potential jokes swirled around in her brain and bounced off the excitement in her heart.

Would she perform the joke comparing her second husband to a skittish rescue dog? Or would she entertain the crowd with her trip to see an attractive Austrailian gynecologist? That was for her to decide.

Whether it be at the airport as she eavesdrops on a mother declaring her hatred for Kelly Clarkson or in a Santa Rosa Junior College classroom after her students regale her with astrology conspiracies, Stahl-Haven absorbs the world around her and crafts those experiences into jokes.

“With everything in life, I’m trying to do a lot of writing constantly. There’s so many daily experiences [to write about] if you’re really awake to the world,” she said.

A Bay Area native, Stahl-Haven, 39, believes she was born to teach, yet she hid from her students a secret passion: her talent as a stand-up comedian.

After Stahl-Haven competed in the 44th annual San Francisco Comedy Competition this year, she found it difficult to conceal her double life. She was eventually outed in her communication studies classroom.

“In one of my classes, my student raised her hand and was like ‘I have a weird question: Are you a stand-up? I thought I saw you in the paper,’ and I went ‘I…don’t think it was me,’” she said. “It was this whole awkward moment, and then I said, ‘Yes. It’s true. You saw it.’”

When it comes to stand-up comedy, Stahl-Haven is a novice with only a year and a half’s worth of experience under her belt.

She shied away from stand-up comedy for 15 years while she juggled a career in teaching and improv performance.

“I really avoided stand-up because it scared me so much. It’s the worst. Every audience is different,” she said.

Stahl-Haven explained she has performed at a variety of different venues, from Sacramento State University to a retirement home where the median age was 85.

The first time Stahl-Haven performed, she was sick about it for weeks prior.

She mustered up the courage to deliver her routine and received reassuring feedback.

This propelled her to sign up for another amateur competition in Marin.

From that point on, Stahl-Haven realized that not only is she a gifted performer when it comes to improv, but she can also enthral an audience with her witty writing and cartoonish body language. She continued working on her material and performing about once a month in the Bay Area.

“I kept forcing myself to do it,” she said.

These humble beginnings inspired Stahl-Haven to apply for the world-famous San Francisco Comedy Competition, a multi-week event that helped launch the careers of comedians such as Robin Williams, Louis C.K., Dane Cook and Ellen DeGeneres. This reputation makes the competition entry challenging.

“Some people have been doing this for 20 years and have gotten rejected eight times. [I thought,] there’s no way,” she said.

But a way there was.

“When I found out I got in, I literally sobbed. I thought I wouldn’t make it past preliminary, and that would be the best I’ve ever done,” she said.

Stahl-Haven was going to be one of the 32 people performing her material and pushing her comedic skills for a grand prize of $5,000.

With the pressure on, she began to prepare her jokes and cherry-picked the best of her writing for the demanding weeks that followed.

“It’s so hard to know what’s funny,” she said. “Some more veteran people have told me recently, you just have to go with your gut and if you think it’s funny, usually you’re right. If you have good instincts.”

One of Stahl-Haven’s practice strategies was to sit in front of her husband and recite her material, which she admits wasn’t the easiest way to gauge if a joke was funny.

Stahl-Haven would often sit in the car on her commute home to Novato and practice her material. She recorded these sessions as a way to ensure she would not go over the competition’s strict time restraints.

“You want to make sure you can get enough material in as you can, because you’re trying to showcase yourself, but you can’t go over,” she said.

During the competition, comedians are signaled via flashlight to indicate how much time they have left: a solid light when they hit the minimum time, a flashing light for one minute remaining and a red light for when they have exceeded their time and incurred a penalty.

The competition was a whirlwind

experience for Stahl-Haven. She had to perform 15 shows in three weeks for all three rounds — preliminary, semifinals and finals — in unique locations scattered around Northern California while also being a mother to two children and an adjunct instructor at three campuses: SRJC, University of San Francisco and College of Marin.

At the end of the semifinals, 8 p.m. Sept. 21 at the Luther Burbank Center in Santa Rosa, Stahl-Haven learned she would be one of five comedians moving forward to the final round of shows in Walnut Creek, Sacramento, Oakland, Modesto and Carmel.

The finals were tight. Stahl-Haven’s biggest competitor, Sterling Scott, believed he was going to sweep the final round.

The last night of the competition was make or break for each of the five comedians, and tensions were high at Carmel’s Folktale Winery.

But being in the finals was what mattered most to Stahl-Haven.

For every performance, the competition announced that night’s winner and who would be moving on to the next round based on the points received for each set.

On the last night, the judges announced both that night’s winner and the overall winner of the tournament.

Once the judges declared Stahl-Haven as that night’s winner, giving her the most available points, she knew what was coming.

“Then they announced I was the winner overall. Everyone went crazy, and [my family] was so happy,” she said. The winning female comedian and her supporters shed tears of joy, and their good time proceeded into the after party — until they didn’t.

“We’re in this after party and one of the producers comes up to me and says, ‘It was razor close. We calculated incorrectly, and you’re actually second,” she said.

Stahl-Haven paused. The experience was surreal.

For a little over an hour she thought she was the first woman in history to win the competition, but instead, Sterling Scott took the glory.

Stahl-Haven still isn’t clear on what exactly happened, but she’s decided it’s best to move on.

Historically, second-place finishers tend to have more illustrious careers, and Stahl-Haven is the only woman to share the second-place position with Ellen DeGeneres.

“If anything, I had a lot of people in comedy reach out to me. Maybe it afforded me more opportunities that there was a drama,” she said.

Stahl-Haven won $2,000 for her second-place win, which she immediately spent on various gifts for her family.

She bought a new desktop computer for her 11-year-old daughter, Georgia, to practice her writing and a bike for her 3-year-old son, Dashiell.

Stahl-Haven is unsure what comes next. She admits how hard it is to work full-time as a teacher and pursue comedy in the evenings, but recognizes the deep connection she has with teaching.

“I love teaching, and I genuinely believe it’s what I’m meant to do. It’s a career that if you don’t really love it, especially as an adjunct, then you wouldn’t still be doing it,” she said.

Stahl-Haven’s experience gave her a new perspective of life as a stand-up comedian, and she realized while she loves comedy, her fellow comedians aren’t exactly her “people.”

“Everybody after the show was like ‘Oh we’re all going out to this place until 3 in the morning doing cocaine and stuff like that’ and I’m like, ‘Oh, I have to get home because I’m making snickerdoodles in the morning,’” she said.

She acknowledged the subtle sexism and misogyny present in the competition and how the lifestyle of male comedians is polar opposite of her own.

“There’s so much misogyny in comedy. It’s so undercover, these dudes who act like they’re woke. They don’t even want to hear that the world is not equal. They’re almost annoyed that you might say something is because you’re a woman,” she said.

Overall, she feels the idea of women is changing in both the comedy and competition world.

“If you look at the San Francisco Comedy Competition, this was kind of historic. It was the first time in history two women had been in the finals ever. I was only the second woman ever to place that high except for Ellen. I know the Boston Comedy Competition after 20 years had their first female winner,” she said.

But in Stahl-Haven’s eyes, like many other female comedians, change isn’t coming fast enough.

“You’re seeing some stuff shift,” she said. “I tend to be a little cynical about it and go ‘Oh? First in 20 years? F*ck you,’ Instead of ‘Yay!’ You should have had one sooner.”

While Stahl-Haven is new to the comedic stage, she’s always felt like she’s had a place there.

“Women have always been funny.”