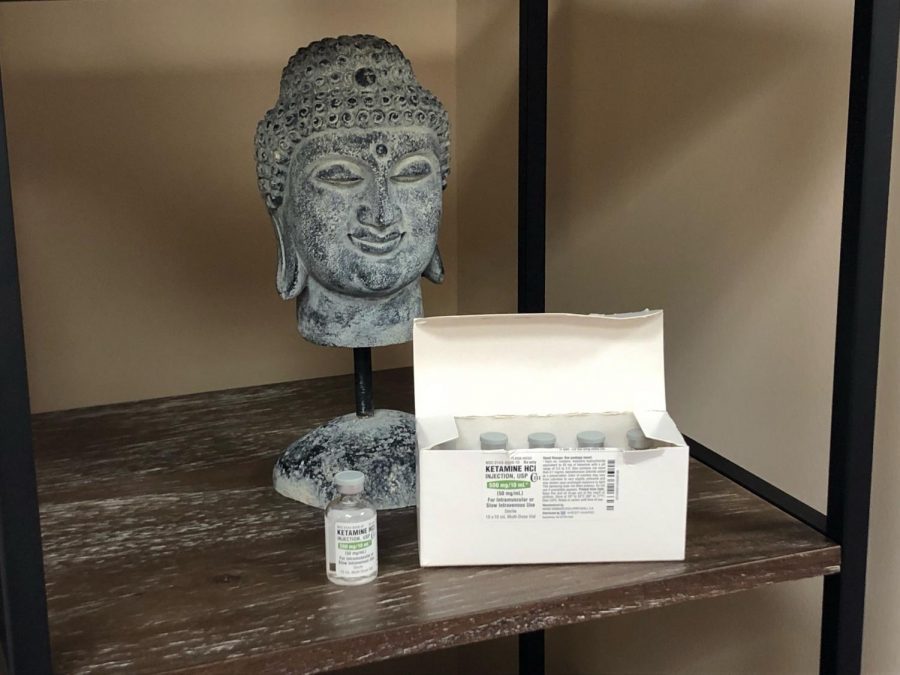 A psychedelic retreat. A 75-milligram dose of ketamine. Intramuscular injections.

Eve laid on her mat with her trip-sitter beside her. She felt it coming on. Then, whoosh.

“I don’t know if there was a windy noise, or it was just inside my head. The tumbling, turning, kaleidoscope effect came on, and I was pushed along into a place of distortion and loss of ego. Things continued turning and pouring and weaving, and I seemed to get smaller, and there was a loss of connection to what had come before.

“The fabric- or sand-like nature of the experience expanded, and I really couldn’t hear any music, and I couldn’t remember why all this was happening or who I was but it was more and more obvious, inexorable, the realization that this is how it is.”

Eve shared her experience online via the drug research database site Erowid. It is unknown if she used ketamine to treat depression or other mental illnesses; however, more people are using psychedelics in conjunction with psychoanalysis to better understand themselves and combat the source of their psychological pain.

As recently as 10 years ago, psychedelic therapy was seen as a dark art in the medical community.

The legacy of Dr. Timothy Leary and the counterculture movement of the 1960s permanently tarnished the legitimacy of psychedelic studies.

But now, medical researchers and therapists across the country have opened their eyes to the efficacy of psychedelics in treating many psychological disorders such as PTSD, depression, anxiety and addiction.

Studies from prestigious universities and institutions such as Johns Hopkins and Stanford have proven the power of psychedelic compounds such as psilocybin, LSD, MDMA, DMT, mescaline and ketamine to treat psychological disorders, reduce suicidality and improve patients’ standard of living. Psychedelics have even been used to relieve the stress of patients in dealing with end-of-life scenarios.

Another 16% of students reported being so depressed in the last two weeks that it was difficult to function.

In most of these cases, when a student asks for psychiatric help dealing with mental health, they may be given a prescription drug that masks their symptoms and be sent home. A typical psychiatry session will last 20-30 minutes.

Ketamine, the drug Eve used, is one option for those seeking alternative psychedelic-assisted therapies.

Ketamine is a legal medication under Schedule III DEA regulation, meaning it has a moderate to low potential for physical and psychological dependence. Other drugs in this category include buprenorphine and Tylenol with codeine. Like both those drugs, ketamine is a controlled substance that must be appropriately administered by a healthcare professional.

Its use in mental health is still considered “off-label,” meaning that psychotherapy isn’t its intended use.

Dr. German Ascani, a West Santa Rosa resident and native of Argentina, has been practicing psychiatry in emergency rooms, clinics and other settings for 12 years. Last summer, he opened Evolve Mind Wellness, a psychotherapy clinic in Sebastopol where he offers general psychiatry, as well as ketamine therapy, to patients who haven’t been cured through traditional prescription drugs or who are dissatisfied with traditional therapy.

Ascani comes to this line of work from a bilingual and bicultural background, having written a chapter on indigenous and mestizo healing practices. He has participated in copious studies and psychiatric research on a variety of topics.

Over the years, Ascani came to believe that the majority of people he treated continued to live with chronic dysfunction from psychological wounds that standardized industrial psychiatry objectified and labeled as symptoms.

“Medication in psychiatry does not kill infectious and invasive organisms,” he said. “It does suppress psychological [and] somatic manifestations of wounds, but it does not treat them at a core level.”

The stories of antidepressants, pill-related suicides and over prescription are prevalent in our society.

“If you take the view that medication is the treatment and stop there, subscribing only to the medical or biological model of treatment, you miss the humanity, the connection, the compassion that is imperative in a healing process,” he said.

“The healing process must address relationship, compassion, humanity and spirituality.”

“Ketamine therapy, or any psychedelic-assisted psychotherapy, breaks conventional practice paradigms in that it truly humanizes and dignifies the healing process,” Ascani said. “This kind of therapy is lengthy, and it’s intense. But it’s very rewarding.”

The average ketamine treatment session can last two to three hours, with a few hour-long standard therapy sessions beforehand in preparation for the experience, giving the therapist and the patient time to build trust and delve into the heart of the patient’s psychological wellbeing.

“You’re not rushed. You’re not part of an assembly line, prescription-type medical approach. It’s a little bit more out of the box,” Ascani said.

The ketamine session is followed by integration, the crucial process of restructuring one’s life by analyzing the ketamine experience.

One of the single most important things Ascani realized about Ketamine-Assisted Psychotherapy, or KAP, is its role in reducing suicidal ideation in nearly all of his patients.

He’s seen KAP patients undergo a significant shift in perception after treatment. Even for patients with chronic suicidal ideations, one of the biggest changes they report is no longer thinking about killing themselves, even though they still might struggle with depression.

“It is legal at this time, and it is important to realize the life-saving potential for many who have not improved and struggle with being functional and themselves in the world,” he said.

“It is absolutely a life-saver for some who have chronic suicidal ideation.”

KAP works by using the dissociative effects of ketamine to bring an individual to a “transformational state” in which the boundaries of their ego start to dissolve.

The “self” becomes undefined, and the patient’s defenses relax, allowing honest introspection. The “self” then begins to reconstruct with the help of a trained therapist.

With “most of our psych meds, that’s the whole intent — repress the symptoms — but you don’t really get at the root core of why they’re manifesting. [KAP] changes that whole paradigm because people push through those symptoms,” Ascani said.

It is the reformation of the ego that occurs and the introspection that comes with it, along with guided psychotherapy, that makes this treatment effective, Ascani said.

According to Ascani’s own research, as well as the compiled research of other medical professionals, ketamine’s record of clinical safety is undeniable.

The doses used in psychotherapy to reach a “transformational state” or “sweet spot” are much lower than those used in emergency rooms and other settings for anesthesia.

Other treatments with ketamine have tried to avoid the “trip.”

“It’s becoming more clear now that most of these compounds, regardless of what it is — MDMA, LSD, psilocybin — that you need this experience to make meaning, to get better.

“It’s a very profound way of getting new insight into your psyche and yourself,” Ascani said. “There’s a lot of healing that takes place in a safe environment.”

That being said, it may not be appropriate for someone to be treated with ketamine while in a psychotic state such as schizophrenia or certain types of bipolar disorders, as the “transformational state” and dissociative effects can have negative impacts that further destabilize an unstable psyche.

In addition, the minimum age for treatment at Evolve Mind Wellness is 18 years old. “This medicine is not for everybody,” he said.

The injections are only given in the office, whereas patients can use the lozenges both in the office or at home with prior approval.

Ketamine therapies are not covered by insurance, though the situation is always changing.

The sessions cost hundreds of dollars.

“It is demanding, labor intensive, high-touch depth-work. It’s lengthy, and there’s no escaping that reality in the current ‘for-profit’ model of medicine,” he said.

One of the ways Ascani intends to counter the “For-Profit” model is by seeking funding for his ketamine research.

Ascani’s goal is for the treatment to not be pressured by the market. One possible source of funding would be from private scientific and psychedelic organizations interested in funding research in the field.

Another source would be impact investors looking to do social good with their philanthropy.

All of this is in its infancy.

Just as psychedelic psychotherapy has proven to be a brave new world in the treatment of mental disorders, a private, grass-roots funding of psychedelic research has flourished in the legal gray area, absent of government support.

Johns Hopkins University is building a new research facility focused solely on the study of psychedelics, while a group of private donors gave $17 million to start the Center for Psychedelic and Consciousness Research at Johns Hopkins Medicine.

According to Roland Griffiths, Johns Hopkins University School of Medicine professor of behavioral biology in the department of psychiatry and behavioral sciences and the department of neuroscience, “The center’s establishment reflects a new era of research in therapeutics and the mind through studying this unique and remarkable class of pharmacological compounds.”

The research center’s focus is not only in medicine. “In addition to studies on new therapeutics, we plan to investigate creativity and well-being in healthy volunteers that we hope will open up new ways to support human thriving,” Griffiths said.

SRJC Psychology Professor Brenda Flyswithhawks believes psychedelics and indigenous spirituality are being embraced in ways they’ve never been embraced before.

“I think we’ve come a long way,” she said. “The term psychedelic used to never be part of our vocabulary, but it’s not new information to me.”

According to Flyswithhawks, the term psychedelic has grown despite naysayers and judgment.

“In my culture we have practiced those [alternative] ways of healing.”

Methods of healing are individual; treatment has to be the right match, she said.

There are many variables, and if a culture drinks the Kool-Aid of prescription drugs, that’s all it will accept.

“Just look at marijuana,” she said, referring to its high medical efficacy but historic social stigma.

What Flyswithhawks finds interesting is when people from different ethnic groups share different medicines that they’ve used, they will be ignored, but when white male doctors inside a white male institution say it’s OK, it becomes normalized.

“Now they call it science,” she said. “[But] the history of drugs is highly racialized.”

Flyswithhawks sees this dichotomy even at SRJC.

“First thing we did was teach students to grow grapes to make wine,” she said. Alcohol, being a “white” intoxicant, has status and class that other drugs like marijuana and psychedelics lack.

Regardless, Flyswithhawks is proud of the SRJC hemp program and sees it as a step in the right direction.

“[SRJC] has really prepared students for these alternative ways of thinking and living in the world,” Flyswithhawks said.

Ascani suggests SRJC students who are looking for a humanistic rather than a medical approach to mental health should consider ketamine treatment.

“It’s not just treating a symptom because a symptom has a core somewhere. It’s about finding that core, plugging back into your source, into yourself.”

Oftentimes a person’s environment and way of living causes them so much pain. Typical psychiatry wants to rationalize that pain as nothing more than a chemical reaction.

“You may be diagnosed with depression, anxiety or trauma, but these are all just labels that really describe human suffering.”

Dr. Ascani encouraged students to seek freedom from that oppression.