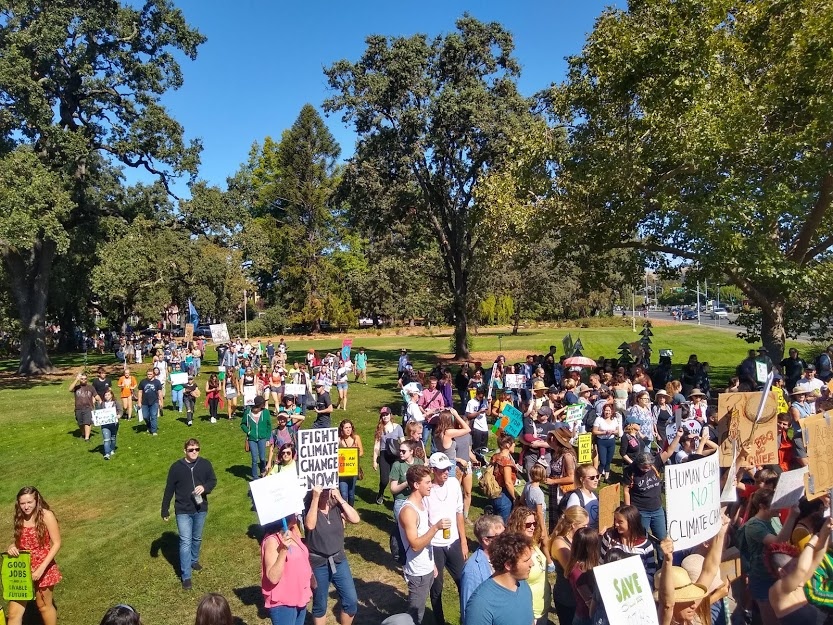 On Friday over 2000 students and community members marched to advocate for climate change, and many expressed their motivation to take action resulted from the effects climate change have had on their mental health.

While many students come to college expecting to explore their interests and find a fulfilling way of combining those interests with a career, their world is no longer so simple.

In light of recent climate change effects being felt by students around the globe, more feelings of hopelessness and despair began to bubble up to the surface and impact the lens through which students view themselves and their pursuits. Living in the environment’s continued decline has left many students feeling anxious, depressed or even straight-up hopeless.

Society’s understanding of human-caused environmental damage has been known for decades, ever since Exxon’s research in the ’70s investigated climate change and Susan Soloman’s in the ’80s provided an explanation for depleting the ozone.

But scientists’ understanding of climate change’s effect on mental health is only now under the microscope.

According to the Washington Post, one in seven teenagers say the effects of climate change will cause anywhere from a moderate to a great deal of harm to their generation.

The National Institutes of Health weighed in too, with research showing rising temperatures and increased rates of aggression and violent suicide.

Eager to put action behind their words on reversing climate change, 2000 Santa Rosa students and city residents came together Friday to demonstrate as part of the Global Climate Strike.

Felix Santiago, 21, was among the SRJC students who protested. They’ve stayed up countless nights ruminating on climate change and the state of the world they will inherit.

“It’s really affected my OCD to the point where I can’t sleep at night and I wonder if the heat has really contributed to and increased my anxiety,” Santiago said.

Santiago recalled numerous times when the rising temperatures seemed to be connected with their emotional well-being, added to their insecurity and left them feeling hopeless.

Santiago is just one of many students around the world who have felt the impact of climate change on their well-being.

Although there is no official diagnosis for climate-induced anxiety, impact on students’ daily lives is omnipresent.

When asked if climate change affected his perspective on the future, SRJC student Milton Contreras, 20, said, “I do get anxieties; what’s the purpose of studying if doom is imminent?”

Sofia Tecpoyotl Ramos, 20, is another student who commented on this link between climate change impacting how students perceive their future. “Students are worried right now that there might not be a future for us to live in, and it definitely ties with mental health,” Ramos said.

Nikki Magallanes, 19, is an SRJC student who’s experienced climate-related mental detriments to her mental health. “Honestly, the heat makes me tired and crazy which adds to my anxiety and feeds into my feelings of depression,” he said.

In the wake of global youth organizing to fight climate change, climate activist Greta Thunberg delivered an emotionally charged and powerful speech to lawmakers at the United Nations Climate Summit in New York City about the despondency she feels over the life-altering course climate change is wreaking on her and future generations..

“You have stolen my dreams and childhood through your empty words. People are suffering. People are dying. Entire ecosystems are collapsing. We are in the beginning of a mass extinction,” Thunberg said.

“And all you can talk about is money and fairytales of eternal economic growth. How dare you!”

Back at the climate march in Santa Rosa, Sophia Porter spoke on indigenous access to environmental justice. She shared her experience as someone who is conscious of her environmental impact and aware of how global citizens ambitions ambitions are changing.

But negative emotions were just some of the feelings protesters experienced. For some, the march contrasted the protesters’ everyday feelings of despair due to inaction.

Mikaya Martin, 21,  shared what the march meant to her and the importance of getting involved. “Any type of activism is around finding solutions and seeking out others to help you,” Martin said.

Many students volunteer with nonprofit organizations as a way of combating climate change – or to find a semblance of peace in a world they can’t control, lowering their anxiety levels.

“I have been receiving a lot of emails regarding combating climate change from both students and faculty,” said Sofia Tecpoyotl, Student Government Assembly vice president of sustainability.

According to Earthday Network, taking small actions such as using public transportation, unplugging unused electronics and supporting sustainable and climate-transparent businesses can all help reverse climate change, which will reduce feelings of hopelessness, depression and worry.

“Climate change has strengthened my life plans and really motivated me to help others and spread awareness of these issues and be involved,” Santiago said. “It’s made me so happy to see people come who I would never have expected to see here and seeing the whole community coming out means a lot.”