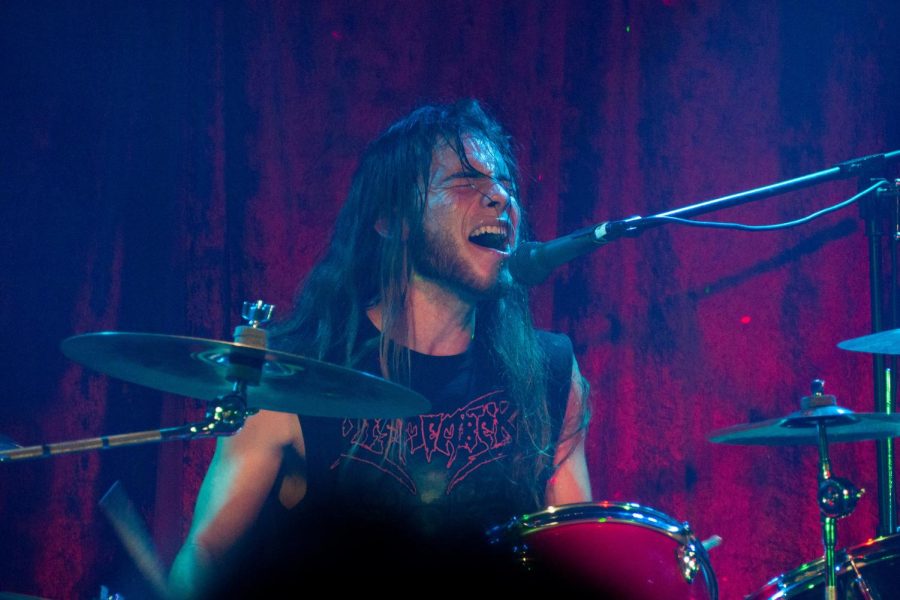 Drummer Rafael Bañuelos, 21, performs on Nov. 9 at 3 Disciples Brewing in Santa Rosa during an Incredulous show.

Garages and bedrooms and bars: Making it big in Sonoma County

Branden Carrell and his bandmates watch where they step in their makeshift recording studio. The former garage, once a photo studio, now serves as Carrell’s grandmother’s bedroom. Carrell’s band, Incredulous, chose the room for its acoustics, despite needing to squeeze a drum kit and guitarist Forrest Giuletti’s recording equipment around Grandma’s bed. Guitar amps are tucked into awkward angles to accommodate the tangle of cords and cables. Incredulous has recorded two EPs in her bedroom, both mixed and mastered by Giulietti.

Across colleges in Northern California, young musicians with new ideas and old dreams organize bands and play shows — with shared dreams of making it big. Legendary groups like Metallica, Exodus and the Grateful Dead share our home and define our reputation as a mecca for metal and rock ‘n’ roll.

Thrash metal group Incredulous was born at the same school — Analy High in Sebastopol — where the Grateful Dead’s Jerry Garcia attended. “Just jamming in a garage, that’s how we started,” guitarist Carrell said. “We just played as a three-piece for so long, trying to find a drummer and there’s no metal drummers.”

Locals sometimes take the North Bay’s international reputation for granted, and it took a new friend from Chile to remind Carrell of this. After listening online to the Chilean thrash-band Aberracíon, Carrell contacted frontman Ignacio Norambuena on Facebook. “I messaged him and was like, ‘Dude, I love you guys, I want to get some shirts, I want to get some CDs. Whatever you have, send it to me.’” After talking more with Norambuena and learning how he held the Bay Area in such high regard, the bands threw together a joint tour throughout Northern California.

“Pretty much I was jamming with Forrest at the time, and we were a shitty, Led Zeppelin thing,” Coon said. “I was friends with Branden from middle school, and I started talking to him about thrash all the time, and I was like, you guys want to start some thrash-metal shit?”

Incredulous struggled to find a drummer, until fate brought Napa native Rafael Bañuelos on board. “I broke up with my old death-metal group,” Bañuelos said. “The day we broke up, I got hit up from our good friend and Forrest’s bandmate Luis, and he asked me if I wanted to jam with Branden and Forrest.” Within 20 minutes, Incredulous had their new drummer.

The band played its first show on Oct. 16, 2016 — opening for SoCal death-metal veterans Cattle Decapitation. “That’s our opening,” Bañuelos said. “We’re not playing a dingy bar or something? We’re opening for Travis Ryan and the gang? That’s crazy!”

Bañuelos mused on the lack of open venues in his hometown of Napa. “There needs to be more of an acceptance of alternative forms of music in towns like that. A lot of places need to be more open because we’re just hippies who wear leather. Don’t worry.”

Incredulous band members have high hopes for what’s next. “End goal: be together, another album, another EP, friendship for life,” Carrell said. They hope to tour again, both with Aberracíon and on their own.

Dreams of making it big in music transcend genre, and banda norteña crew La Agencia has been playing and chasing those dreams since its members were children.

At 15, Ortiz picked up his dad’s accordion and found playing it came naturally to him. “It felt so much easier than the keyboard,” Ortiz said. La Agencia transitioned from a keyboard and six-string guitar combo to a typical Norteño accordion and 12-string guitar style. “As we practiced more and more, some of our family members hired us for their quinceañeras.”

Aside from private shows, La Agencia recently played the Equinox Festival, the first Rohnert Park Latino Festival, the Rivertown Revival Festival and the Railroad Square Festival. The group released on Spotify its first two original songs, and the

musicians heatedly debate moving on to a full album. But without enough original songs, the album is still in the distance.

La Agencia also doesn’t have a manager and members struggle to stay organized. They have their own speakers and sound system but don’t hire a sound tech to set up and have to do it themselves with difficulty.

La Agencia’s members plan to move on to college, and they wrestle with their musical style and their education plans. The future of the band is still up in the air, album or not.

The dream to make it big drives local bands to leave Sonoma County and develop a fan base in a bigger city. Santa Rosa death metal band Damascus made that choice and headed to Los Angeles after playing in Sonoma County for their first shows.

Bryan Kuehn, 29, attended SRJC and played in an early incarnation of Damascus that didn’t last. Later he reformed the band later with new members to greater effect. They recorded an EP and a single, practicing in a Santa Rosa smog shop rented by the hour.

Kuehn and two other members moved to Los Angeles to make it big but returned home fractured. “There was good and bad things that came out of it. We learned a lot,” Kuehn said. They opened their last show for Cattle Decapitation in 2015 before going on hiatus the following year.

Musicians like Ortiz, Carrell and Kuehn struggle to balance school and band life. “It’s really hard. We only get to meet like once a month, usually,” Carrell said. Bañuelos and Carrell of Incredulous work in Sonoma County, Coon goes to school in Arizona and Giulietti is a student in Oakland.

The La Agencia band members also wrestle with their future as a band moving forward.

Ortiz plans to earn his psychology degree at SRJC and transfer to a school in Southern California, and his brother has already transferred from SRJC to Berkeley. Lopez and his brothers are all first-generation college students.

Kuehn has also attempted to keep playing music since Damascus fell apart in 2016. So, he jams regularly on his own and plays with his church band. The former vocalist is still active in another band, and the other members play on their own too, but they all still share their passion for music and a drive to play again.

“I think about it all the time, every day,” Kuehn said. “I do intend to do at least a new project, whether it’s with Damascus or not. A lot of my closest buddies, who are like my brothers, were all bandmates of mine at some point. All of my closest friends, they feel like family, and I can’t help but feel like us practicing together all the time and being around each other — it’s a family thing.”