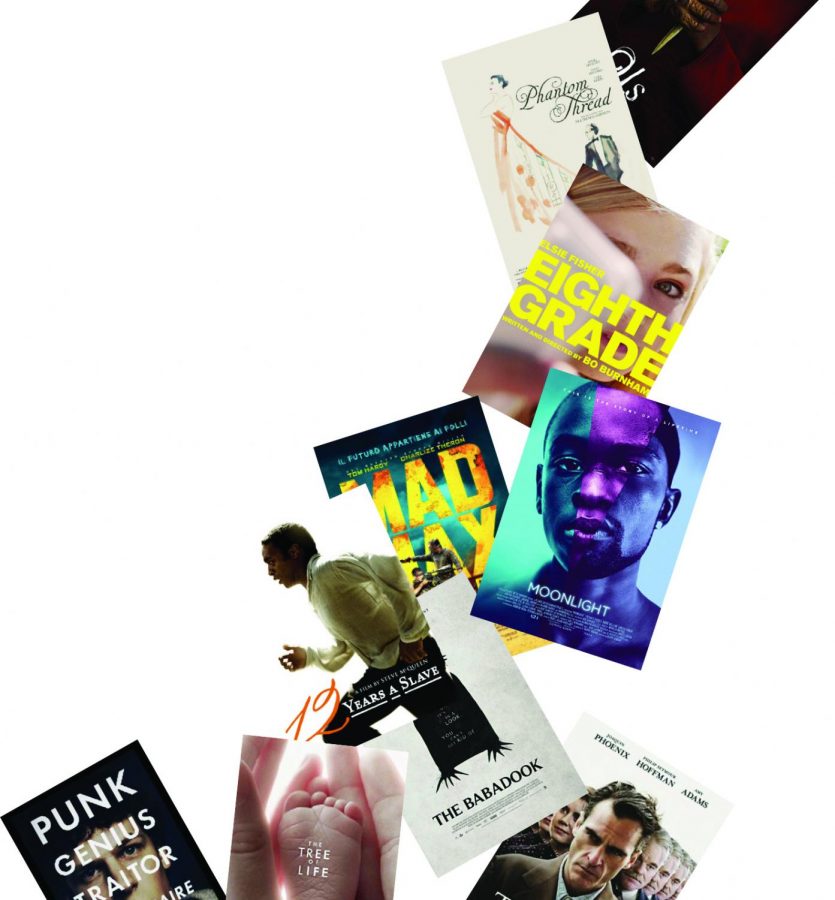 In the 2010s, we saw many new classics by directors ranging from old masters to emerging talent. From the rise of commercial LGBTQ films to the wider acceptance of minority-directed films, it’s never been easier to see yourself on the silver screen. Here are 10 iconic films that feature supreme technical skill and impactful storytelling

“The Social Network” dramatizes the creation of Facebook and the battles it began that are still raging today. Jesse Eisenberg plays a spot-on Mark Zuckerberg and Aaron Sorkin’s impossibly clever dialogue turns a movie about a website into a classic film. It’s aided by an emotive, award-winning score by Trent Reznor and Atticus Ross and a lovely supporting cast. While the film’s treatment of women ranges from uninteresting to problematic, its depiction of misogyny among tech elite is accurate.

Brad Pitt stars as a god-fearing father and Hunter McCracken plays his impulsive, emotional son in “The Tree Of Life,” Terrence Malick’s meditative epic about a Texan family. More than a typical family drama, “The Tree Of Life” is an impressionistic dream of trauma, hope and life. “The Tree of Life” distills all of life into a gorgeous stream of moments with mind-warping special effects, breathtaking cinematography, sterile production design and dramatic classical score. Malick’s typical free-form narrative makes the film feel long, but patient viewers will be treated to a cinematic experience unlike any other.

history while telling the story of

Freddie Quell, a tortured veteran played by Joaquin Phoenix, and

Lancaster Dodd, a charismatic pseudo-intellectual who runs a Scientology-like cult. Mihai Mălaimare Jr. brings crisp and measured cinematography to sweeten Paul Thomas Anderson’s tight script. Amy Adams plays wonderfully against type, but Phoenix and Hoffman’s performances are simply indescribable; an interrogation scene early in the film features some of the best writing and acting of the decade. Like all of Anderson’s films since “There Will Be Blood,” Jonny Greenwood lends the film an experimental string-heavy score.

A true story more terrifying than any horror film released in the 2010s, “12 Years a Slave” is an unflinching depiction of the terror of slavery. Chiwetel Ejiofor’s portrayal of freedman-turned-slave Solomon Northup is one of the decade’s best performances, and the rest of the ensemble cast is also admirably good. Lupita Nyong’o’s debut performance earned her an Academy Award for Best Supporting Actress. Inspired by the brutal tableaus of Francisco Goya, the film is full of both beautiful and sobering imagery. The powerful production design and score help make “12 Years a Slave” a worthy Best Picture–winner.

Jennifer Kent’s directorial debut, “The Babadook,” centers around family trauma, guilt and repression with a lo-fi approach influenced by early-mid 20th century horror cinema. The plot and the scares are intertwined, driven by the performances of Essie Davis and Noah Wiseman as Amelia and Samuel, a grief-stricken mother and her behaviorally-challenged son. The theatrical production design updates and improves the traditional “haunted house” horror trope. Built on the premise that parental abuse and fear of human connection can destroy familial relationships, “The Babadook” is a simple allegory. In the words of Francisco Goya, “The sleep of reason produces monsters.”

Most action movies don’t center on women’s issues, but “Mad Max: Fury Road” isn’t most action movies. It’s a vibrant, exciting roller-coaster ride with feverish editing, a bombastic and occasionally beautiful score from Junkie XL and unhinged, cartoonish performances. The production design is immersive, featuring iconic costume and vehicle design that gives the film an epic scope not unlike the “Lord of the Rings” trilogy. Furiosa, played by Charlize Theron, is one of the decade’s most badass protagonists, proving herself tougher and more compelling than Max, the protagonist of the series, played here by Tom Hardy.

“Moonlight” tells the story of a sexually-confused man named Chiron in three chapters, showing him as a young boy, a teenager and then a grown man. The first LGBTQ-related Best Picture winner and the first to feature an all-black cast, “Moonlight” attacks traditional masculinity with an achingly tender script. Just as young love and infatuation feel fuzzy and unclear, the painterly camera work often focuses only on the characters. Mahershala Ali’s muted performance earned him a Best Supporting Actor win despite being on-screen for only 10 minutes. Alex Hibbert, Ashton Sanders and Trevante Rhodes let their individual performances bleed into one in their multi-aged portrayal of Chiron, Naomie Harris gives a monstrous turn as Chiron’s drug-addicted mother and Nicholas Britell’s minimalistic score perfectly complements the film.

“Eighth Grade” is the prototypical Generation Z movie. The film depicts the last week of middle school for socially anxious eighth-grader Kayla, played by the transcendent Elsie Fisher. Some of 2018’s most uncomfortable movie moments come from “Eighth Grade,” but only because the situations Kayla gets into are all-too relatable. “Eighth Grade” is the directorial debut of comedian Bo Burnham, who began his career on YouTube and honestly addresses smartphone obsession in teenagers without demonizing them. The direction and design of “Eighth Grade” is spellbinding, and Anna Meredith’s thoroughly millennial score reflects the film’s postmodern style. Supporting talent Jake Ryan and Emily Robinson give the film a natural warmth.

“Us” is a horror film that plays on class anxiety and begs for multiple viewings. The film is a uniquely American vision from writer/director/producer Jordan Peele, anchored by Lupita Nyong’o’s explosive lead performance. Horror-aficionado Peele literalizes American class warfare with themes of mirror images and systemic oppression. The scares feel earned, the soundtrack is perfect and the score is eclectic. Supporting cast standouts include Winston Duke, Elisabeth Moss, Shahadi Wright-Joseph and Tim Heidecker.

Honorable mention to Bong Joon-Ho’s “Parasite,” another one of 2019’s best films, which explores similar themes through a South Korean lens.