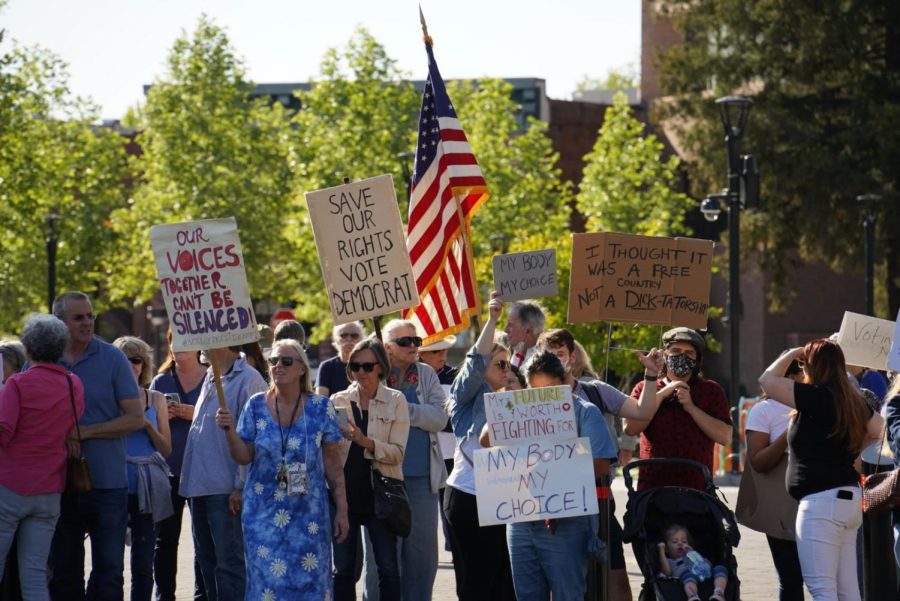 Protesters chant in support of reproductive rights at Courthouse Square on May 3.

In 26 states women are seeing their access to reproductive rights disappear as the hot-button issue is contested across courtrooms and debate halls by everyone from politicians to priests. It’s a topic widely argued, one that has divided Americans along religious, political and gender lines. Two groups surface from the chaotic fights: pro-choice and pro-life. Both call each other murderers. One killing humans, the other killing liberties.

The United States Supreme Court ruled in favor of allowing women the right to an abortion in 1973. Roe v. Wade made history, beginning in Texas, trickling across the country. Yet, the road ahead was rocky, as future lawmakers would stand to threaten abortion rights. Over the past few years, Southern states have chipped away at abortion rights with new laws restricting access based on the age of fetus and issuing fines and punishments for abortion providers.

Though abortion is legal nationwide, it’s up to an individual state’s discretion how and if the process occurs.

In 2021, Texas created the nation’s most restrictive law, banning abortions past six weeks. Opponents say most women do not know they are pregnant by then, let alone have the time to make a decision. The law offers no exemptions to rape or incest victims.

Oklahoma followed their neighboring states with an even more prohibitive law banning almost all abortions from conception. Oklahoma’s bill also bans abortion after six weeks and gives citizens the right to sue abortion providers. It only allows women to get abortions if the pregnancy threatens the woman’s life.

Other states, including Alabama, Arkansas, and Idaho, also have new restrictive laws.

An unknown source leaked the draft of Justice Samuel Alito’s opinion to overturn Roe v. Wade. If Roe v. Wade is overturned, states will be left to decide for themselves how abortion processes should be handled, and all of the new abortion laws will go into effect federally uncontested.