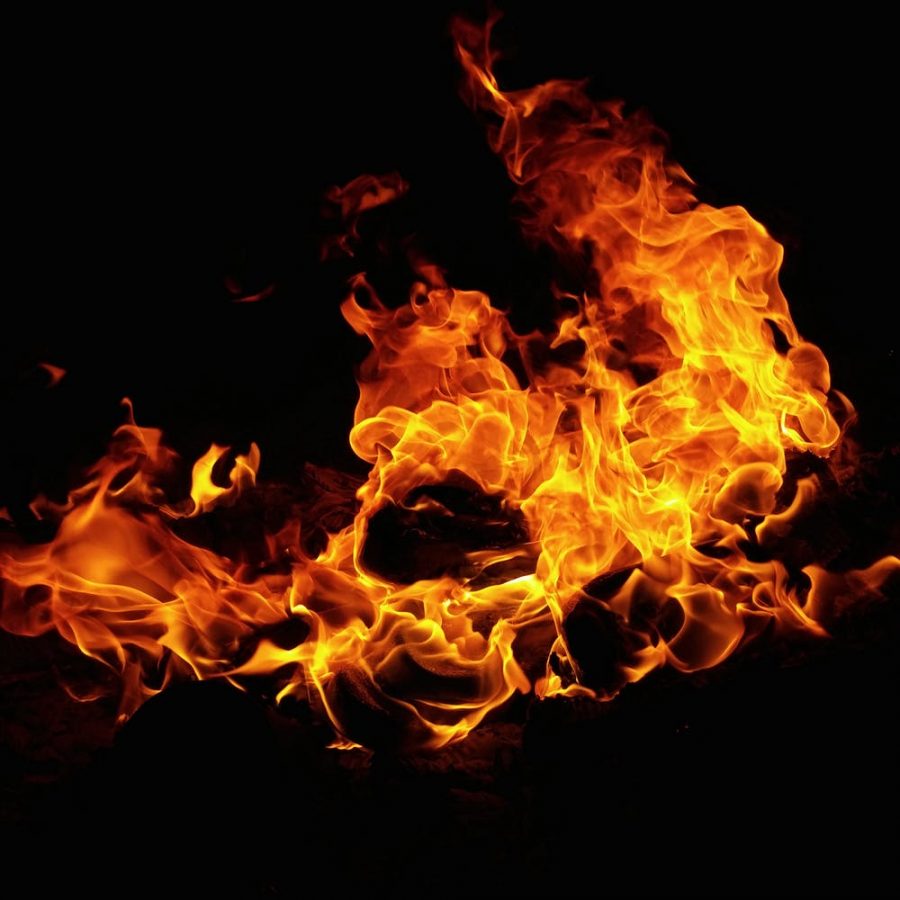 Fire flashed across her vision, sparking discord in the ashes of her mind. The dreams of sleep, of love and sunshine, of night and fear, faded in that flash of flame. Her nostrils curled. The taste of acrid smoke and burning plastic tainted her tongue. Heat and soot stained her skin. Each heavy breath lingered in her lungs, choking the life from her.

The darkness of her room was all encompassing, save for the deathly glow creeping beneath her doorway. Beyond the door, the dull deafened sounds of crackling wood and creaking drywall were unmistakable.

She stumbled out of bed in a daze, covering her face with her elbow, letting loose a series of hacking coughs. She staggered barefooted towards the door, her pajamas all that stood between the smoldering world and her tender flesh. She reached out in uncertainty to touch the doorknob. It was very hot, but it did not hurt.

She opened the door and felt the oxygen torn from her room, rushing towards the hungering inferno that had been her living room. It raged and spat and cursed her at her, grinning an evil grin. The flames raced towards her from just a few yards down the hall.

She did not have time to think. Nothing could prepare someone for such a moment. Her life became cold reaction, basic instinct. It happened in an instant.

She fell on her hands and knees, a small respite from the smoke, crawling away from the fiery death following her as fast as she could. Down the hall, her brother’s door was open. She crawled desperately, feeling her lungs struggle with the strain.

She practically rolled through the doorway, quick to kick the door shut behind her. Her brother’s room was dark save for the window that looked out over the front yard. A hot ambient glow emanated through the pane of glass. Outside the world was burning.

Still on the ground, she crawled towards the light. Something soft and stiff brushed her hand. She looked down and let out a mottled scream. In the dusky light, she could just barely make out the form of their cat, Coco, stiff and dead. She never saw the cat’s eyes, but she would always imagine they looked sad.

Her hands began to tremble, and she swallowed hard. The reptilian mind, the animal instinct, wrenched back control, its will to live indomitable. She lunged toward the window, prying it open. She knocked out the screen in seconds, using every fiber of her tired muscles to pull herself through the window.

She fell through the hedges outside and hit the hard ground with a thud, whipping the wind out of her. When her air returned, she staggered to her feet and looked solemnly on the ruins of her life.

The world she had known.

The world she was raised in.

The world she had prepared for.

That world was in flames.

Houses burned along the lane as far as the eye could see through the fiery dusk. Empty husks of cars poured out melting metal onto the asphalt. The sky was choked with smoke, and it seemed like the stars would never shine again.

Even the verdant old oak in her yard, once resplendent with life, now towered above her like a flaming flag in an endless wind. Ashen memories of the world-that-was floated down from the sky and kissed her cheek. She tried to wipe them away, but her sweat and tears would not let them go.

She limped down the lane weaving between the ruins and rubble. The smoke clouds swirled in around her, choking out the light. From out of the stark grey darkness, a man in an open blue bathrobe sprinted toward her, his tails fluttered and flapped raggedly behind him.

“My wife! Has anyone seen my wife?” He called out desperately in the dark to no one in particular, a panicked glaze in his eyes.

Those eyes zeroed in on her, and the man came up and grabbed her, shaking her frantically by the shoulders.

All she could do was shake her head, paralyzed by fear.

Part of the man broke just then. He released his hold on her.

He ran off yelling into the darkness.

She never knew if the man found his wife; she never saw him again.

The hot ground littered with steaming coals, twisted debris and smoldering ash scorched her poor feet. She kept walking, each step testing her mettle, each sight aging her soul for an eternity. A part of her never stopped walking through the smoke and fire. It was an endless loop played over and over again each time she closed her eyes.

At some point, through the shroud of ruin, she spotted the lights of police cars and firetrucks — a beacon on the horizon. It took hundreds more eternities to get there, but get there she did. It was all a daze after that. Someone swooped her up. She was in an ambulance. A mask strapped to her face. Her hand was grisly burned.

The doorknob had hurt her after all.

Her eyes rolled into the back of her head. The world went white.

The smoldering spectres haunted her every night. It had been two years. The ever-moving flow of time and the immediacy of now struck her like a train. She woke up startled, weeping, sobbing hysterically. It was a normal thing now.

Her mother rushed into the room, leapt over to the bed, and held her daughter tightly.

The girl burst out in fresh sobs of torment.

Her mother squeezed her tighter.

“It’s alright, baby. It’s alright. You don’t have to be afraid. I won’t let anything happen to you. It’s over now.”

Her mother could never understand.

The sickly grey visage of that smokey cloud, its heart pulsing with hellfire, would always hang over her.

It would always be there.

She would never escape it.