Arts and Lectures Series Dives into the Lives of Domestic Workers 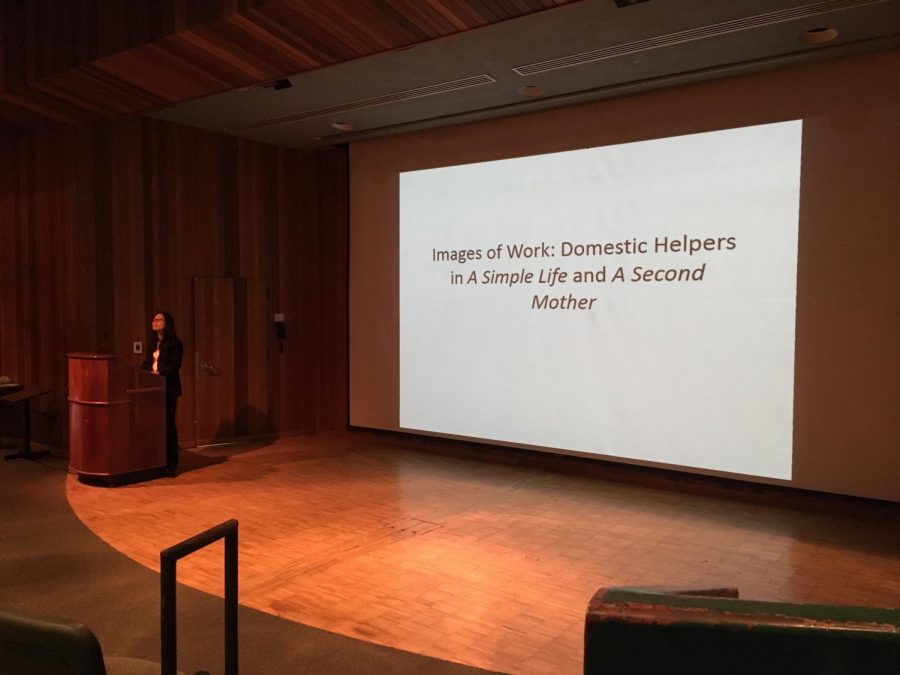 Linda Lau discusses the cultural impacts of the films “A Simple Life” and “The Second Mother” as part of the Arts and Lectures series Sept. 30 in Newman Auditorium

Linda Lau, instructor of Santa Rosa Junior College’s Older Adult Program, looked deeply into the lives of domestic workers by examining the cultural impacts of the films “A Simple Life” and “The Second Mother” as part of the Arts and Lectures series Sept. 30 in Newman Auditorium.

A small crowd of students trickled into the auditorium around noon. Some of the audience members attended last week’s lecture and returned for more.

Lau recognized most of her audience members as her students from the Older Adult Program.

“The Older Adult Program is geared toward seniors, people who are retired generally—but anyone can join the classes. There is no age minimum, and one of the things they promote are intergenerational interaction,” Lau said.

“I found drama as a creative way to communicate with people,” Lau said.

When asked about her connection to the films, Lau said she personally identified as a member of the working class, and that was one of the big reasons she wanted to talk about these movies.

Lau stated her purpose at the beginning of her lecture: to give her audience more information about film and to encourage people to watch more international films.

The lecture included background information on both films, major themes and a reiteration of why these films matter. Lau emphasized the themes of intimacy, distance and food in both films.

In “A Simple Life,” Lau broke down the relationship of a Chinese live-in maid and her master by showing the audience through film clips how the two major themes play out. Lau said the quality of the food in the film improves or worsens with the maid’s health.

Inspired by a true story, “The Second Mother” carries similar themes to “A Simple Life.” It follows Val, a Brazillian live-in housekeeper, and her relationship with her employer’s son.

Lau noted how Val is the one who takes care of not only the son, but the whole family.

Lau wrapped up the lecture by explaining the significance of both films and taking questions from the audience.

Even though the audience was small, those in attendance seemed to enjoy the lecture.

“I thought it was really interesting. She gives this other way of looking at things, and the topic is really important right now because there is this big race component,” said Older Adult Program–student Sammy.

The Theater Improv class started Sept. 14 and runs through Dec. 14. The class meets from 9:30 a.m. to 11:10 a.m. on Saturdays at the Rohnert Park Retirement Community.