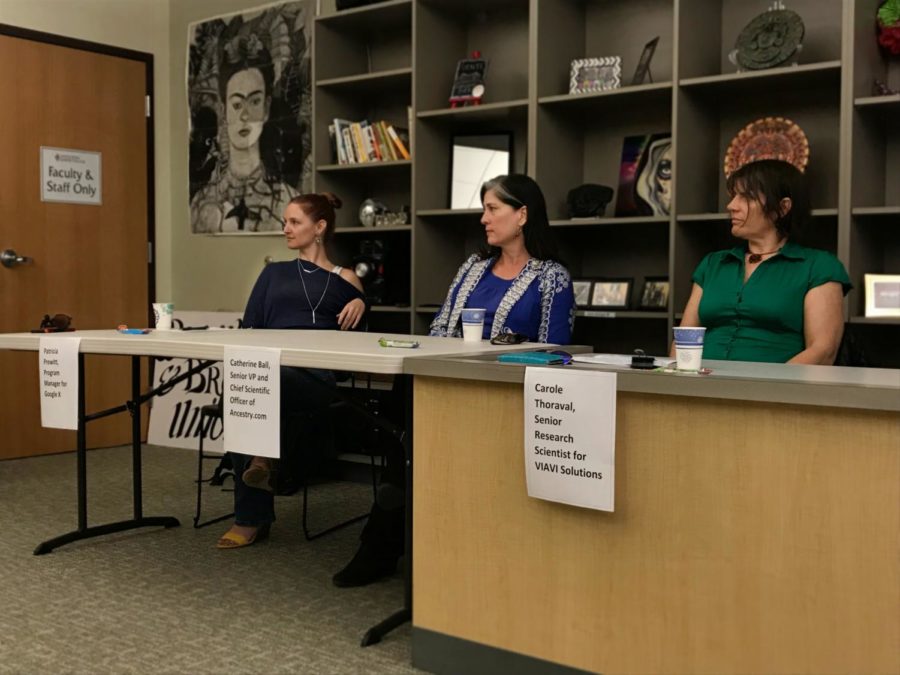 Three high-profile women in technology shared experiences working in a field that doesn’t typically see a woman’s name beyond Siri and Alexa.

Women from X, the moonshot factory, Ancestry.com and VIAVI Solutions gathered March 30 for the Women in Technology panel at Our House Intercultural Center on the Petaluma campus, a Women’s History Month event.

These women in technology embodied personal standards, the power of persistence and advocacy for diversity in the workplace.

Women led and dominated the field of computer programming in the ‘60s, according to Gender News Magazine. Today, it’s the savvy, white-collar domain of men. As technology operates the world at exponential rates, women must reclaim a place in this industry.

“There are more CEOs named John than there are women. That puts into perspective the world we’ve been living in the last few years,” Ball said. “There’s nothing inherently evil about technology. It’s business.”

Being the only woman in the room was a shared experience, but none faced disparity in wage or respect. According to Ball, bias goes beyond the technology spectrum.

Given the public scrutiny on potential pay gaps in recent years, good companies will ensure any wrong is righted, Ball said. Google, founder of X, the moonshot factory, was involved in a 2017 lawsuit claiming wage inequality, and a New York Times investigation of 1200 employees’ salary data found Google paid women employees less than men at equal level jobs. Prewitt said she has not experienced inequality herself.

Google Ventures recruited Prewitt through a reference and a background in finance. Upon reconsideration, her blend of financial experience and an English degree earned her a spot on a Google creative team instead.

“For X, [women] probably do drive an enormous amount of the creativity,” Prewitt said.

Prewitt, an English major, rejected Google’s first employment offer. Now, she’s earned her fourth promotion, with the affiliated X, the moonshot company. She was promoted to project lead for an initiative within X just before the event.

“It can change the world,” Prewitt said of her new venture within X. The semi-secret think tank company works to solve huge problems through radical solutions and breakthrough technology. For example, Project Loon aims to provide internet access to two-thirds of the world without access by using a network of balloons traveling on the edge of space.

Skilled communication is necessary for business and creative aspects of technology, like management or marketing.

“You can learn everything else you need to learn, as long as you can communicate well,” Prewitt said.

“Commitment to lifelong learning is the recipe for success,” said Ball about the ever-changing nature of technology.

The next wave in science, technology, engineering and math, or STEM, is processing data into conclusions and information, Ball said.

“Turning data into information is magic. It takes a lot of work, creativity, imagination, context and judgment,” Ball said.

Computer codes are the building blocks in advancing technology. From Thoraval, who wrote software while specializing in chemistry, to Ball, who built databases to study the human genomes, to Prewitt, who shared the language with engineers and physicists, the panelists expressed its value. 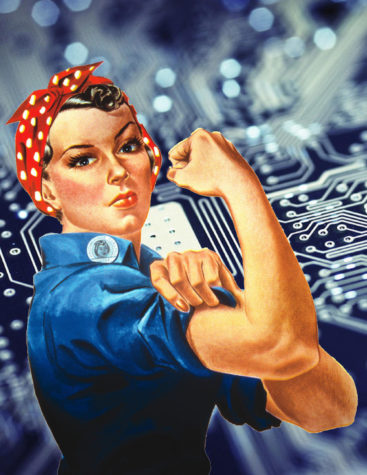 One aspect of computer literacy is understanding the labor and time behind coding, Ball and Prewitt explained. Impossible expectations will earn you disrespect from the software engineers.

Being computer literate increases autonomy. It gives you the independence to resolve and prevent computer errors.

Hands-on careers are found in research and technical areas, such as laboratories or hardware engineering. Becoming an engineer may mean starting as a technician.

Getting your foot in the door can begin with a knock. For Thoraval, knocking on the door of the local company Optical Coating Laboratory, Inc., or OCLI, landed her a job in an environmental lab.

After earning a doctorate in chemistry and years of computer programming experience, Thoraval did laboratory work while writing software and reports. With enough resources and freedom, the next initiative for Thoraval was managing her own projects.

VIAVI is currently working on an anti-counterfeiting color shifting pigment.

“For getting a Ph.D. or for serving in the military, there are going to be experiences in your life that are difficult, but they teach you so much about yourself. That’s the lesson you carry throughout your life,” Ball said.

Ball explained how the discipline, drive and focus from earning a doctorate enabled her to take night courses for coding, as a single mother with two young children. She learned code to drive her own work forward. It teaches you management, problem-solving routines and self-awareness, she said.

Most high positions require a doctoral degree. A 4-year degree is often the minimum requirement. In few instances, proven skills and experience can compensate.

“Students here are really anxious about what to do with their liberal arts degrees,” said Dr. Amanda Morrison, SRJC Petaluma coordinator for Our House Intercultural Center. “They haven’t made the connection that they might have a place in Silicon Valley and tech sectors.”

With a sociology degree, Morrison was able to find work at Citysearch, part of Ticketmaster.

Prewitt encouraged voluntary exploration in addition to a liberal arts degree. With an English degree, she expanded her skills by learning Python, a programming language, and doing voluntary work in foundational medicine at Harvard. Ball, who went directly from undergraduate to graduate school, believed she would have benefited from gaining more experience in-between those years.

Students with a liberal arts degree can still have a prospective future. “Don’t worry about it. Really. I’m living proof,” Prewitt said.

Prewitt, who also has no Ph.D., gave an example of a software engineer at Google who qualified without post-high school education. The software engineer was described as brilliant and creative with extensive experience and impressive, independent work.

“Education is the most important. [However] it’s cool how you can make it without a Ph.D.,” said Jamie Molina, an SRJC student and employee for Our House Intercultural Center.

Early exposure to science and technology for girls and women is the foundation for females in these industries. Thoraval works with an annual program called “Expanding Your Horizon” to increase that exposure. This year, the event will be hosted from 8:30 a.m. to 4 p.m. April 14 at Sonoma State University.

“Every time you bring in a new voice, it gets better,” Ball said. “The point is to make a computer game attractive to 70 million people, and we need a few more voices for that.”

“It’s the exposure. Like, ‘Hey, if these women can do it, so can you,’” said Nikko Mendoza, an aerospace engineering student at University of California, Davis and local advocate of STEM in the Roseland district, who attended the panel. “It gets overwhelming when you’re—speaking from experience [as a minority]—a minority in anything and you’re the only person that’s like that.”

For Thoraval, it was a knock on the door; for Ball, receiving a Ph.D. gave her skillsets applicable throughout her life and career and for Prewitt, saying ‘no’ ultimately led to a leading role for a groundbreaking project.

“It’s so obviously our future. Why wouldn’t I want to shape it?” Prewitt said. “It’s not necessarily a ‘who.’ It’s just a vision of the future, and knowing that it’s going to affect me, I might as well make it.”