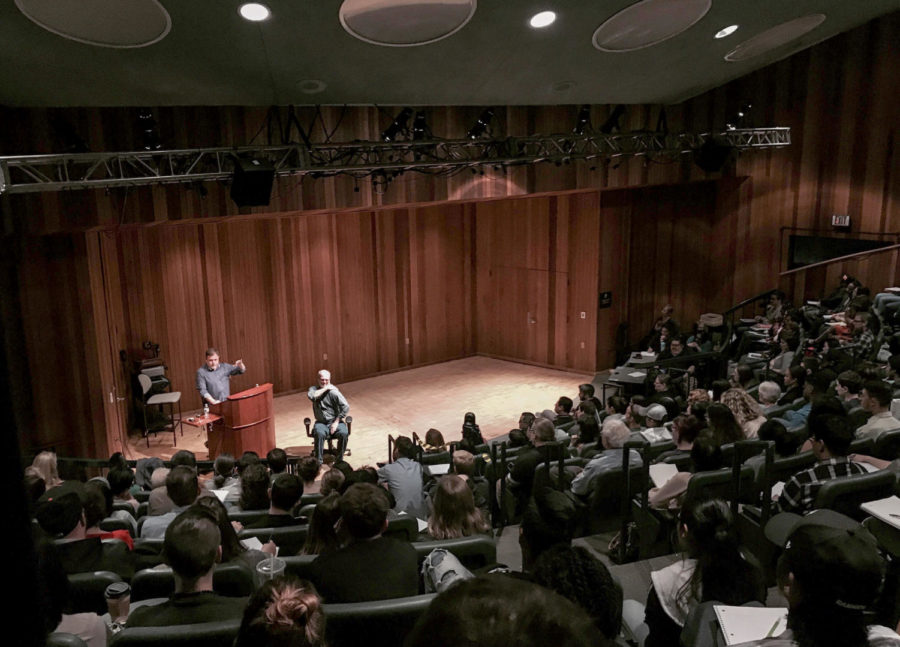 Time Wise, author of "White Lies Matter: Race, Crime and the Politics of Fear in America" speaks to SRJC attendees about the state of racism in America. Photo by Adeira Sherpa.

Racism isn’t new. It hasn’t just now come to surface under the Trump administration. Perhaps it stems from the American dream, the belief that success is purely dependent on how hard ones tries, an American anti-racism activist and writer told Santa Rosa Junior College students April 9.

Tim Wise, the author of  “White Like Me,” “Dear White America” and most recently, “White Lies Matter: Race, Crime and the Politics of Fear in America,” which charismatically explain the downfalls of white privilege, not just for people of color, but for whites as well, spoke to a packed Newman Auditorium as part of the 2018 Santa Rosa Junior College Arts and Lectures Spring Program.

As a father of two teenage daughters, Wise attempted to maintain some hopefulness despite a predisposition to cynicism, especially in his line of work.

He began by explaining how under the Obama administration his job became the hand-holding and convincing of white people that racism still existed.

“The election of a person from a marginalized group says nothing, literally nothing about the larger structural obstacles facing millions of other people from that same group.”

Wise’s only silver lining with Trump’s presidency is that the obviousness of racism is no longer questioned.

Beyond the wealth disparity, there’s also the over-penalization of blacks and browns for crimes committed just as often by whites. Wise brought up marijuana dispensaries; while whites get away with making it legal, blacks and browns are criminalized for smoking in the streets, he said.

He compared the inequity to a disadvantaged runner in a race. If someone is starting enough laps behind their competitor, even if they’re running faster, they might not catch up.

He also unapologetically called out the individuals who believe that Trump’s behavior is unprecedented and “not normal.” A rich white man having power and turning other less wealthy white people against blacks and browns is a history that keeps on repeating itself.

“If we limit ourselves to an analysis of the obvious, we miss the institutional—we miss the structural,” he said.

Wise, who’s made a career out of educating America as a whole though his books and educating students by giving speeches at more than 1,000 campuses nationwide, provided a history of where this idea of being white came from.

The concept wasn’t derived from a commonality between those of European descent but from wealthy landowners in the colonial period realizing how outnumbered they were by poor people. It was a means of maintaining control. By incentivizing poor white indentured servants with the perchance of growth, they were able to prevent a joint rebellion of slaves and the poor.

The mindset became, “I might not be rich, but at least I’m not black,” Wise said. The same tactic was used in the Civil War to keep poor white men fighting so the wealthy could keep their slaves and then again when labor unions segregated against African-Americans.

But by demonizing the blacks and browns, it wasn’t the poor or middle class that benefited, it was still the wealthy white men. The poor and middle class were only digging themselves deeper.

Wise also criticized labor unions. He said their perceived professionalism through the exclusion of other races weakened their cause by decreasing their potential union size and in turn providing their employers with an alternative labor force.

He then jumped into a discussion of the present. Wise ridiculed the support for the building of a wall. He explained capital isn’t going to be stopped by the wall. Economic investments will continue to go where labor is cheap.

“In a way that takes advantage of lack of worker protections, lack of minimum-wage protections in those other countries,” he said. “So rather than joining together in solidarity in a global labor movement that could fight to raise wages and working conditions for all workers, we just get pitted against one another while the rich folk continue to make off with all of the money.”

Wise drew audience members in with a comedic retelling of an incident with his daughters in the car. The younger of the two, who was 10 at the time, questioned her father, “Why is this neighborhood pretty much all black?” An excited Wise was interrupted by his 12 year year old who quickly answered “red lining.”

He explained that the problem ran deeper than that. Red lining, a practice from the 1930s through the 1960s where the Federal Housing Administration drew red lines around neighborhoods they would not invest in,  was the reason the neighborhood remained poor. Whites were being subsidized to move out of the city and into to suburbs and blacks were being trapped within city limits because of lack of fair housing and discrimination.

Wise’s education on the subject made it possible for him to further explain the situation to his daughters, but not every parent would have such an accurate response.

Most parents would answer with what culture has ingrained into Americans; that as long as you try hard enough, success is possible. This answer would be in total denial of the history.

It’s a system rigged against minorities but one that sets up whites for a fall as well. Wise drew connections between the opioid epidemic in rural small town America and feelings of inadequacy and unpreparedness “inequality is dangerous because you never know when it’s coming for you.”

He compared Trump to a political opioid – a means of stopping pain but not actually fixing the problem. A Band-Aid to essentially mask socio-economic problems.

Wise ended with a call to action

“We have a lot more to gain out of solidarity and unity and fighting back this history of divide-and-conquer that has worked so perfectly to keep us fighting with one another, once again, over the pieces of a pie that not one of us in this room own.” He continued, “We have a decision to make, a decision for which our children and our grandchildren will judge us for either kindly or harsh – the decision is up to you.”