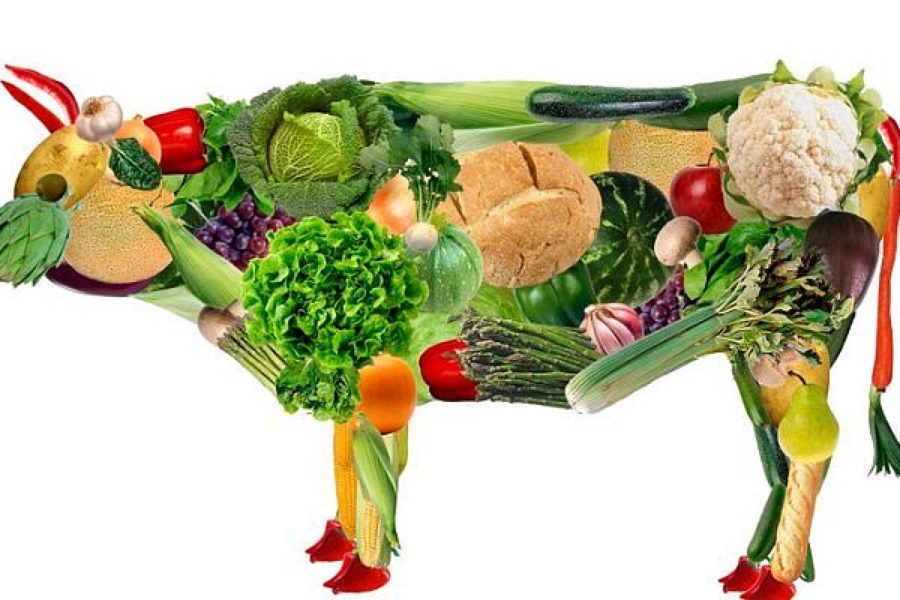 A quick disclaimer before we start: I am not fully-vegan. I’m vegetarian, though I avoid dairy and make sure that the few dairy products I do eat are sustainably sourced.  This response talks about both vegan and vegetarian beliefs.

I’m sure by now most of you have read “Vegans grind my gears,” an ill-informed smear piece against vegans, written by a fellow Oak Leaf staffer. After reading it, I came up with a hypothesis of how it came to be.

I’m guessing some scary 19-year-old vegan art major with a septum ring who calls herself “Leaf” hit him with sound logic on why eating meat is harmful to both animals and the environment, and she made him feel just the slightest bit guilty. After he’d had a couple months to lick his wounds and look up some of the most extreme cases of vegans being reprehensible, he wrote his piece.

Don’t get me wrong; it’s fun to hate on vegans and vegetarians. We do super irritating things like eat dairy-free cheese, use cruelty-free makeup and advocate for the ethical treatment of animals. We also avoid buying from brands that test on animals and/or needlessly destroy their habitats for materials. Occasionally, we even protest for animal rights. So annoying, right?

And according to my classmate, it’s only in pursuit of a looking like a good person.

The author’s first claim is that vegans lack “understanding of food insecurity in our country,” but he doesn’t elaborate any further.

Alright, let’s talk about food insecurity in our country. It’s an epidemic affecting 41.2 million Americans, many of whom are children and seniors. At the JC, 3,500 students are considered food insecure. As far as what contribution vegans have to those numbers, I’m lost. One can only assume he means it’s selfish for vegans to impose voluntary food restrictions on themselves when there are so many people who don’t have the privilege to do the same.

You will never find a vegan berating a poverty-stricken family for eating government cheese. We might be obnoxious at times, but we aren’t assholes. And I’m not depleting a poor family’s food supply by spending $13 on a once-through at Gaia’s Garden. The only thing I’m depleting is my bank account.

We understand the issue of food insecurity, but our dietary choices have nothing to do with that. I can assure you that we are grateful for the privilege to live a meat-free life.

I’m also curious who said that being vegan is the “most spiritual” diet? We are all aware that going vegan is a personal choice based on our empathy for harmless animals being mercilessly tortured and killed for our consumption.

Call me dramatic, but that’s exactly what the meat industry does. However, it’s also everyone’s personal choice to partake, and vegans and vegetarians are more understanding than you’d think.

I’m the only vegetarian in my family, including my boyfriend of five years. And guess what? At Thanksgiving, I ate my green beans and I didn’t shove my beliefs down the throats of the 20 people sitting around me gobbling up the turkey!

I’m not sure why some people think that we share our opinions on animal cruelty just to prove our morality or sound self-righteous.

The author also brings up PETA. Oh, PETA. He is right that not every vegan is a PETA supporter, but just because someone is doesn’t mean they agree with everything PETA says.

Yes, the organization is extreme and runs questionable campaigns, but they also bring light to a lot of overlooked animal cruelty. I’m talking about fashion and beauty brands killing animals to use their fur or skin and unhealthy conditions for animals living in zoos.

The author also mentions an incident where a Yupik teen from Alaska who killed a whale as a “rite of passage ritual” received anonymous death threats but there is no evidence that any of those came from vegans and it’s hurtful to assume that they did.

The teen did however receive backlash from Paul Watson, founder of Sea Shepherd Conservation Society, in a social media post calling him a “16-year old Murdering  Little Bastard.” Even if Watson’s words were disgustingly ignorant towards the teen’s culture, nowhere in his post does he threaten death or encourage anyone to do so.

Let me reiterate, most vegans and vegetarians aren’t mean people. Most are very understanding and accepting of cultures that hunt and sacrifice animals for religious, ritualistic or other sacred reasons. Taking the actions of a few and stereotyping an entire group of people is absolutely ridiculous…and familiar.

An essential part of being a vegan or vegetarian is knowing where the food that we eat comes from. We make sure it’s coming from a cruelty-free company, or that there are no hidden animal byproducts in our food. Many of us also prefer to buy within our region to stimulate local economy.

The author also attempts to debunk veganism as a means to end hunger. Obviously, we are never going to completely eradicate the production of meat, but we definitely have the means for everyone to eat a plant based diet. Ninety-five percent of our oats and 80 percent of our corn goes to livestock. If we didn’t over-breed cows, chickens and other animals, we would have plenty of food to supplement our diets.

Lastly, the author says, “relying on veggies is foolish if blight strikes.” Well, if blight strikes, we wouldn’t have meat either, considering that farm animals rely only on plants like hay, oats and corn.

The author of this article is entitled to his own opinions, and I’m cool with that. If you want to eat meat, go ahead. If you want to encourage a non-vegan lifestyle, knock yourself out. Hell, let’s even have a productive debate about it. But when you make hurtful assertions with no concrete evidence and poor logic, I have a problem.

To assume that vegans and vegetarians are all omnivore-hating PETA freaks is wildly off base. A majority of us are more hurt by this article than offended, and that’s why I needed to address it. Contrary to popular belief, vegans have feelings too.