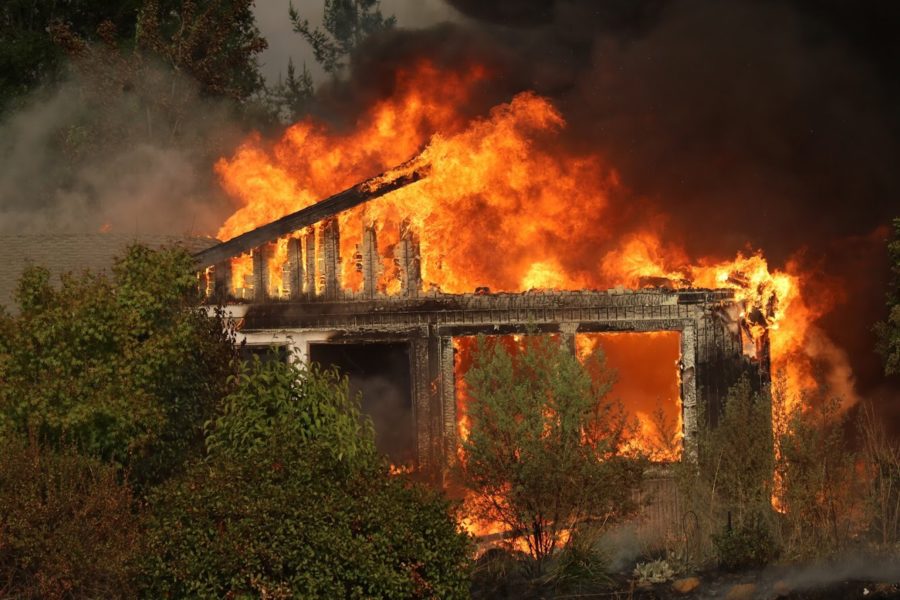 Over 60 active fires continue to destroy buildings, Oct. 9, in Santa Rosa like this house on Deer Park Lane.

Santa Rosa Junior College campuses will remain closed through Sunday Oct. 22 because of the active fires that continue to spread throughout Sonoma County, affecting hundreds of SRJC students, faculty and staff.

SRJC will provide walk-in services as soon as possible and a fire relief fund has been established to meet needs of students, faculty and staff.

More than a dozen fires are currently ravaging the North Bay. They have destroyed at least 1500 structures and forced more than 20,000 people to evacuate their homes so far. Authorities estimated that more than 5,000 people have evacuated from Santa Rosa, but that number could be low.

“My city is not alright,” said Santa Rosa Mayor Chris Coursey in a press conference Monday evening. “It’s going to take a long time but we’re a strong city, an indivisible city.”

SRJC President Dr. Frank Chong was informed of the situation at around 4:20 a.m. Monday morning and decided to shut down all SRJC campuses Oct. 9-10. College officials have not yet announced when classes will resume.

“We know we’re closed tomorrow. Probably things will look very different by tomorrow afternoon,” said SRJC Director of Communications and Marketing, Ellen Maremont Silver. “Hopefully they’ll get a handle on it but there is not enough fire personnel to contain all of the [fires] in a short period of time so the question is how quick are the firefighters in containing the fires that are closest to the Santa Rosa Campus.”

Only emergency personnel are on campus currently, and there is no plan to open the campus at this time, the administration will take it “day-by-day.”

“We have facilities also in Windsor, Southwest Santa Rosa, Petaluma and Shone Farm,” Maremont Silver said. “Right now they all seem to be in very good shape but depending on the winds tonight and how successful the firefighters are, that could change.”

School officials are advising everyone to be safe and to listen to proper authorities’ instruction.

“We are very concerned that people not feel a tremendous pressure to try and rush back to school,” Maremont Silver said.

Santa Rosa officials have evacuated a large portion of the north section of the city. For an updated list of neighborhoods under mandatory evacuation, click here: ht tps://local.nixle.com/santa-rosa-police-department.

Rohnert Park officials evacuated G and H sections, and voluntary evacuation is in place for K section. Fire was approaching from the east near Petaluma Hill Road on Monday.

Governor Jerry Brown has declared a state of emergency in Napa, Sonoma and Yuba Counties as fires continue to burn with zero percent containment.

Senator Mike Thompson called for the Federal Government to declare a State of Emergency.

“It’s unorganized chaos right now,  I basically just started grabbing waters and passing them out,” said Jesse Berg Russell, 23, a volunteer at Santa Rosa Veterans Memorial Hall. “We have food trucks coming soon and medical staff inside. There’s some of us who just started helping and people are starting to catch on and help out.”

For more information on emergency shelters in your area you can visit: http://sonomacounty.ca.gov/FES/Emergency-Management/Emergency-Shelters/

Remember to stay off the roads if you are not in a mandatory evacuation zone. Many thoroughfares are congested and at a stand-still.