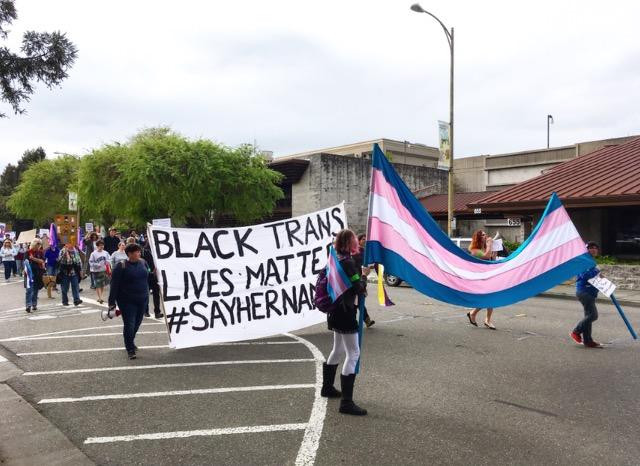 Almost one month after the federal ruling on transgender bathroom rights, a crowd of several hundred people gathered at Santa Rosa City Hall this Saturday to march against President Donald Trump and his administration’s new policy towards transgender citizens.

The organizers of this rally and march for trans youth specifically point towards Trump’s Feb. 22 removal of federal guidelines that protected the rights of transgender students to use the bathroom corresponding to their chosen identity. This decision rolls back on the Title IX law placed under President Barack Obama, a federal law prohibiting sex discrimination in education.

However, under this policy, states and districts now have the power to determine transgender rights as opposed to the federal government. In response to the new laws, Santa Rosa Junior College has in fact taken steps to insure transgender students on campus are in a safe and accepting environment.

A staff member of the SRJC Public Relations Department, Ariel Erskine, spoke during the rally and was later available for comment.

“The JC has put forth some statements at the administrative level declaring their support for the trans community, which goes a long way to help students feel, at all levels or the college, that this is a safe environment for them, and that the faculty and staff are there to help them,” said Erskine.

After the speakers at the rally gave their personal accounts of the transgender experience and hopes for change, the march began. As the march moved through the downtown streets, slightly disrupting traffic, many people watching began joining the march on its route back to city hall.

Brianna McGuire, a former SRJC student, reflected on the support from the community for the march.

“I’m glad that people are coming together in support. Of course it’s awful that we live in a world where people are so oppressed, but it’s always good to see people coming out like this,” said McGuire.

Jasmine De La Torre, an SRJC alumni and organizer for the march, said the march was organized without permission and caused some disturbances in traffic but was pleased with the event and the overall support and presence it had in downtown Santa Rosa.

“I thought it was a really great turnout, and I feel like we raised awareness in the Sonoma County area for transgender rights for students. I felt like it was a very powerful demonstration,” said De La Torre. “We have to stand up for our rights because right now we’re being attacked and their [the Trump administration] attacking the youth that is very vulnerable and our future.”