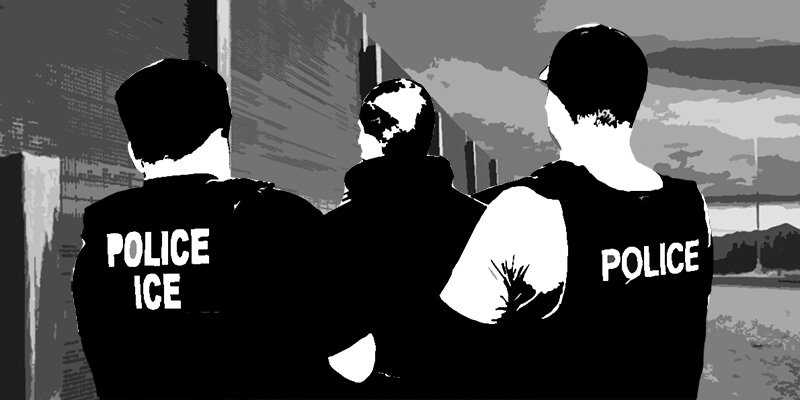 The president has long expressed a desire to stop illegal immigration into the United States. His administration’s plan, released Feb. 21, is to hire thousands of new immigration enforcement and border patrol agents, expand the number of undocumented immigrants who can be deported, and speed up the deportation process itself.

Currently, 11 million undocumented immigrants live and work in the United States, according to the Department of Homeland Security. In 2013, around 38,500 lived in Sonoma County, according to the Press Democrat.

To prepare for the immigration law changes, the SRJC Board of Trustees unanimously voted Feb. 14 to make SRJC a Safe Haven school for undocumented students and other marginalized populations. SRJC President Dr. Frank Chong said it was the most important resolution to come before the Board of Trustees in his five-year tenure.

Specifically, the resolution states that SRJC will not release any personally identifiable student information, including any data related to immigration status, except if required by law, nor will the school cooperate with any state or federal effort to create a registry of individuals based on any protected characteristic such as national origin, religion, race or sexual orientation. The resolution will also not allow SRJC District Police to make an arrest solely on immigration status.

“I want to reassure worried students and teachers that this resolution is very clear in that we support everybody’s ability to come here; they are welcomed here and we embrace diversity,” Chong said. “Trump’s rhetoric is much more sweeping, much more aggressive than before [under President Barack Obama]. We, as a community college, are an open-access institution. The only people we do not really welcome are people who are of danger to our college, but as long as you want to come here and get an education, you can do that.”

One group of SRJC students intended to be protected by the college’s new resolution are the Dreamers, those who came to the United States as children and were given a Social Security Number despite their undocumented status, in accordance with Obama’s 2012 Deferred Action for Childhood Arrivals (DACA) executive order.
Around 480 Dreamers are currently enrolled at SRJC. While Trump has said he currently has no plans to repeal DACA, White House Press Secretary Sean Spicer stated, “everyone who is here illegally is subject to removal at any time.”

Under current Immigration and Customs Enforcement (ICE) guidelines, agents are told to stay away from college campuses. Chong hopes those guidelines will be maintained, but if they are not, he said that ICE agents will not be welcomed if they show up on campus.

“I don’t know if we can make sure students feel safe here on campus under Trump. There is an issue of trust,” Chong said. “If push comes to shove, the Board of Trustees and I would have a conversation about whether we are going to uphold the so-called ‘law’ even if we believe it is wrong, or whether we are going to exercise civil disobedience instead.”

Chong has discussed the possibility of ICE agents on campus with District College’s Police officials.

“I have talked to our police chief and his staff and they don’t really want to do that,” he said. “The question then is, when you are a sworn officer and you are told to uphold the law, this becomes then an ethical and moral issue that is going to confront every American here.”

One of the undocumented students at SRJC is Enrique Yarce Martinez, a political activist and critic of Trump’s administration. He said undocumented immigrants, both on campus and in the community, experience significantly higher levels of stress since Trump’s election.

“I’ve seen a lot more fear and paranoia from my community. Rightfully so, because we’re very noticeable right now. We all just want to be left alone and go to school and work, but the stress from all this immigration stuff is very real,” Martinez said.

Despite the fact that Martinez is a DACA student, he is worried about being deported in the future.

“I’ve been feeling very depressed lately about my future in this country. Will all my work be thrown away? I’ve lived here for 19 years; I’m an American whether they like it or not,” Martinez said. “Anything seems possible at this point, and despite the nice feelings I have that things might work out, I have no idea what will happen. The future is extremely uncertain, and I am scared.”

Martinez has noticed increased fear in the local community.

“Folks will not want to go to work or go out in case of deportation. It causes so much stress in our communities. Depression goes up and suicides will come. My community is scared to death,” he said. “Families are being torn apart with absolutely no thought to the damage.”

According to Martinez, it is important for other SRJC students and staff to understand the situation the undocumented students are in.

“I think the dialogue on these immigration issues needs to continue. Some students at the JC need to know more about what it is to be an immigrant so they don’t fall for the fear and hatred that’s being promoted by the right,” Martinez said. “I am a human being. My parents brought me here out of love and desperation. I deserve respect. I’m on this planet to help people.”

This is Martinez’s last semester at SRJC. He wants to continue his studies at UC Berkeley but said it is difficult to work and study now because of the uncertainty he is feeling about his future.

“It has been difficult to believe that I can do it when so much is stacked against me. But what I’ve decided is that it’s pointless to live a half-life hiding in the shadows. Instead, I will be brown and proud, undocumented and unafraid,” Martinez said. “I’m gonna fight for myself and my people because [that’s what] we all need in order to improve our society. I will get my degrees and I will never stop resisting.”

Many SRJC instructors and staff are confused and anxious in response to Trump’s deportation policies. Terry Mulcaire, an English instructor at SRJC and a representative of the All Faculty Association, wants faculty to get together and have further conversations about how Trump’s programs will affect teachers on campus.

“I’d like to see the teachers talk amongst themselves first and then talk to the [SRJC] administration about what they think is the right thing to do,” Mulcaire said. “I can only speak for myself, but the stress for me as a teacher is mostly about my students, who might be seized and taken out of my class.”
Mulcaire believes that Trump’s immigration policies terrify undocumented students on campus and members of the Hispanic community.

“We all need to realize that this is an acute threat to students here who are undocumented, and a gigantic threat to everybody, to the country and the college,” he said.

“There is no distinction who these people are, whether they are a good person or a bad person, someone who made a mistake, so it’s a blanket attempt to get rid of a lot of people. To me that’s nonsensical,” Bruce said.

In one of Bruce’s cases, a client without documents was charged with vandalism, a crime Bruce worries could now lead to deportation.
“He [the client] told me that if he goes back to Sinaloa, Mexico, where he has never been nor does he speak Spanish, the only thing he guesses he can do then is to fall into crime,” Bruce said.

“There’s no compulsion under the law that the local jurisdiction has to produce and transport to immigration authorities and custody someone they discovered not to be an American citizen,” he said.

Fear of deportation from Trump’s policies are now affecting enrollment at SRJC. At the Feb 14. Board of Trustees meeting, Collegiate Senate President Kathleen Matthies reported the number of students applying for protection under the California Dream Act dropped by 64 percent for the 2017-18 school year, according to College Greenlight.

Matthies stated that concerns about immigration reform and the new Trump administration could be partially to blame for the sudden and significant decrease. 34,141 students applied for California Dream Act in 2016-17; so far, for the 2017-18 school year, only 13,000 have applied.
Pedro Avila, vice president of student services, said he understands students’ anxiety.

“The fear is real. Put yourself in their shoes. They feel like a target right now, the media is talking about it, the president is making them a target so it has to be pretty fearful for them to step out of their homes every single day… I’m sure everyday when they step out [for class] it’s on their mind, ‘what if there is a raid?’” Avila said.

As vice president of student services, Avila wants students to know that SRJC supports all students.

“The college is a safe campus and we are all here committed to protect [undocumented students] and support them… Just reach out. We are here to support them and hear them out [about] anything, anything that might be fearful for them,” Avila said. He continued, “what the board did, that’s a statement, that’s a commitment. Unanimously they approved the resolution and that shows a ton of support from our board and also sends a message to administration, employees and staff that’s the direction that we are taking as a district.”

Decreasing enrollment due to concerns over immigration is a red flag for Avila. He said all colleges, including SRJC, place a high priority on maintaining enrollment numbers.

“Enrollment translates to funding, so if you are not keeping an eye on your enrollment, your enrollment drops, your funding declines which then prevents us to do the things that we need to do for students. The less money we have for services it makes it more challenging for us to do what we do,” Avila said.

The SRJC Safe Haven resolution confirms that the safe spaces on campus will have appropriate funding in order to guarantee enough resources and support for those students who need it.

“We are trying to ascertain that,” Chong said. “Dreamers students said they needed a better space for their Dream Center, so we are looking at appropriate resources to try to find them a more appropriate space. I don’t think that much funds will be required.”

The entire Safe Haven resolution can be found on SRJC Board of Trustees’ website. A Spanish version will be published soon.

UPDATE: President Donald Trump said Tuesday Feb. 28 that he is now more open to let undocumented immigrants stay in the United States. The president’s statement is a compromise bill and comes after criticism for his administration’s drastically more aggressive rhetoric against anyone being in the United States without documentation. Trump’s new position is to let undocumented immigrants without criminal background stay in the country and possibly allow DACA students a pathway to citizenship, according to CNN.