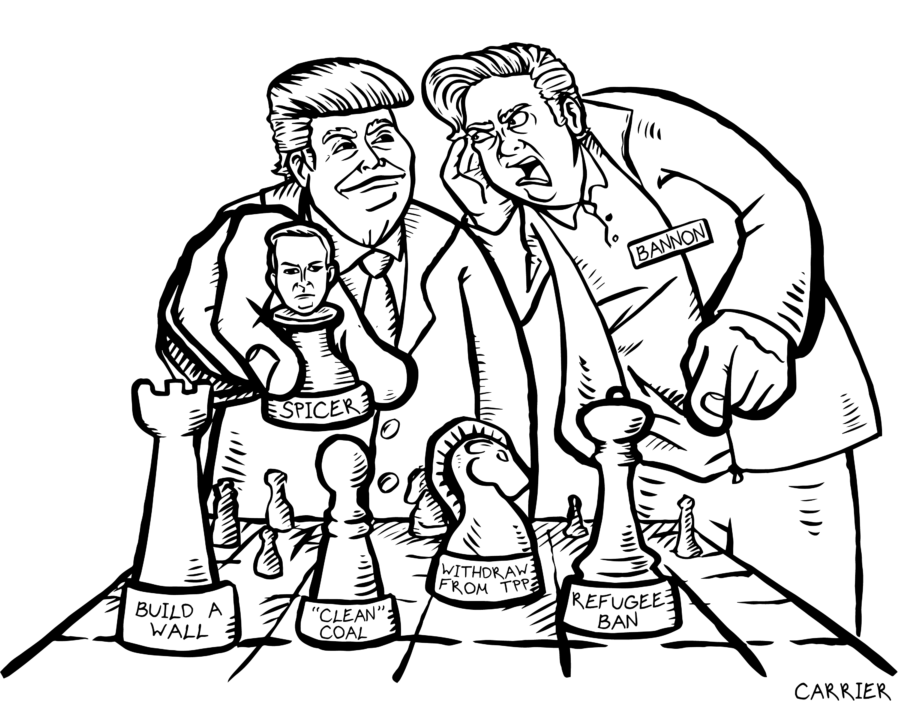 Intolerance is the greatest threat facing our country.

Steve Bannon, assistant to the president and chief strategist for the Trump administration, was a founding member of Breitbart’s board.

Both these men promote the ideas of fear and hate to advance their ideals. President Donald Trump responded via Twitter, “If U.C. Berkeley does not allow free speech and practices violence on innocent people with a different point of view — NO FEDERAL FUNDS?”

The Berkeley protests epitomize the division in the United States between the left and right. With guidance from Bannon, Trump has moved swiftly with the powers of his executive orders to advance the alt-right agenda, including the travel ban targeting Muslims. The duo successfully secured the Rust Belt states’ vote by harnessing the anger of these states and promoting a patriotic nationalist outline that would “Make America Great Again.”

The electoral districts that predominately voted for Trump all rank significantly lower than the rest of America in terms of education. According to a study by Forbes.com, the least educated states, ranked from worst to best, include West Virginia (50), Mississippi (49), Louisiana (48), Arkansas (47), Kentucky (46), Alabama (44) Tennessee (43), Texas (42) and Oklahoma (41) all of which went red. That’s not to say they voted for Trump because they are dumb, but a lack of higher education leads to less economic success. These parts of the country depend on manufacturing jobs that don’t exist anymore. The people of this region are predominately white and conservative.

The common denominator between red and blue states is the marginalization of minorities.

The population of the United States is 63 percent white. The result is that the majority of our representatives are white.

It’s time to realize white Americans live in a very different country, where the biggest fear is a fading paycheck. For minorities, the issues surrounding Trump’s presidency run much deeper. Being marginalized and controlled by the alt-right, inequality, and locked down borders are now constant threats and will be for the next four years.

White Americans have a responsibility to empathize with  minority groups because their vote has so much weight and their privilege gives them a very different view of their communities. The longer we marginalize minorities, the longer there will be this division. White Americans need to educate themselves about their privilege and its affects on society.

Our history books often ostracize minorities and belittle their contributions to the United States.  Rarely do they teach about the Native American genocide growing up; many students only heard the romanticized story of Lewis and Clark exploring the west. White people wrote history books with a single narrative.

America is diverse, whether you are a white heterosexual man from Oklahoma or black gay woman from San Francisco. We are all protected by the same constitution, which says we all have the right to our own liberties.

White people need to check their privilege, start calling out others for their lack of awareness towards privilege, and realize how much they as a whole have really benefited from it. Only then can we begin to create discussions on how to create a more inclusive country. America should be great, it’s had its moments of greatness but it has also been deeply flawed. It’s time to right those wrongs and accept the diversity of our neighbors. You will never understand your neighbor’s life story until you move past your own perspective and listen to their view to create a leveled dialogue filled with empathy.

An eye for an eye makes the whole world blind.

When groups act out with violence, like they did in Berkeley, it is counter-productive to creating a postive exchange of ideas.