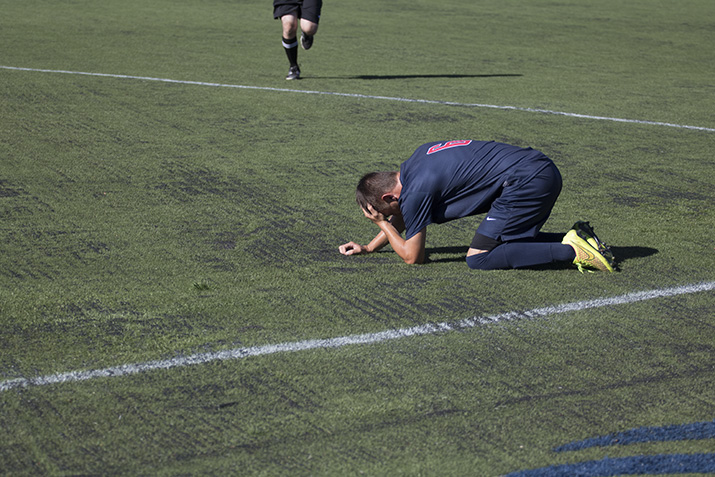 SRJC freshmen midfielder Tony Holleran cradles his head after colliding with an opponent on Aug 30.

Head injury has always been an aspect of sport. Bells have been rung in the name of competition for decades. Increased awareness of how serious a concussion can be, however, has led to more classroom education for athletes to limit serious injury.

But a concussion is more difficult to identify and treat than say, a sprained ankle.  And in the same way that an athlete may want to compete with an ankle sprain, some push through head injury despite the risks.

The study, published by the British Medical Journal Open Sport and Exercise Medicine and hailed as a significant contribution to the field, recommends concussion education move out of the classroom and into the venue of play for a more hands-on approach.

“It shows respect to the work and the identity of the student athlete, and the value of sport by going to their house,” Chinn said.

Chinn and Monica Ohkubo, the head athletic trainer at SRJC, instituted the changes in concussion training earlier this Fall.  The new training resembles traditional practice that student-athletes are used to, but the emphasis is to improve self-reporting of concussions and for players to keep an eye out for teammates with symptoms.

Dr. Chinn’s research revealed physiological and mental obstacles to reporting concussions.  The study’s participants said they didn’t report every concussion because they were ‘in the zone’, or factors like instinct, adrenaline and duty to their team or ‘family’ affected their ability to think critically about injury during competition.

“The [study participant] would sustain a hit and pause very quickly, assess themselves, check out their memory, check out their balance and say ‘Do I know what the score is? OK I’m good to go,’” Dr. Chinn said.  “If you’re self-assessing, that’s a signal that you need to let someone know.”

The venue of play training prepares student-athletes to report symptoms automatically, much like conventional practice prepares an athlete to act instinctively.

“That experience of being locked in and operating on an automatic level, a lower level of brain functioning,” Dr. Chinn explained. “As one athlete put it, ‘I wasn’t thinking anymore, I was just doing it.’”

The training also draws on the family aspect of team sports for when self-reporting fails.

“It’s important to be there for your family because if you recognize that your teammate is injured and you’re not doing something about it, they could end up in a position where they’re much worse and can’t play,” Chinn said.  “Or can’t function in school.”

“I actually liked it way better, it was more hands on” said Benjamin, who has never had a concussion.  “I saw myself in those other guys’ shoes,” he said.  “It registered home more quickly.”

Ohkubo still gives the student-athletes facts about concussion such as the risk of prolonged symptoms, symptoms becoming permanent and the threat of Chronic Traumatic Encephalopathy, a degenerative brain disease.

But bringing concussion education to the field is expected to enhance comprehension.

“We’re bringing them onto the [venue of play] and having their coaches there, doing drills that they’re familiar with and having them practice to ‘tap out’. We give them the words to say to report it,” Ohkubo said.  “Because if you have a brain injury, who knows how you’re going to be effected.”

Freshman soccer player Lexi Martinez participated in the new training with her teammates.

“Before, I was unaware of what to say if I ever did get a concussion and now I feel comfortable if I ever have to report an incident,” Martinez said.

Ohkubo, who is in her 10th year at SRJC, says there was a time when she would record just one to three concussions per year.  But the definition of concussion has become broader, and the consequences of playing with one more serious.

And with popular sports like football taking preventative actions of their own, concussions are in the public eye.  For those reasons alone, the number of symptoms reported has gone up dramatically.

Even with the increase in awareness, 36 percent of student-athletes who have a history of concussion did not report all of their symptoms, according to Dr. Chinn’s research.

In the fall before the venue of play training was installed, there were approximately 23 reports of concussion at SRJC.  That number increased to 40 this fall semester.

“I don’t want there to be 40 cases, but the reality is that there are probably more,” Ohkubo said.  “To me, it’s more important than any ankle sprain because it can be life changing in terms of everyday activities for people. We put a lot of time into it for sure, because it’s so important.”