SRJC’s new theatre production is a spoon full of sugar 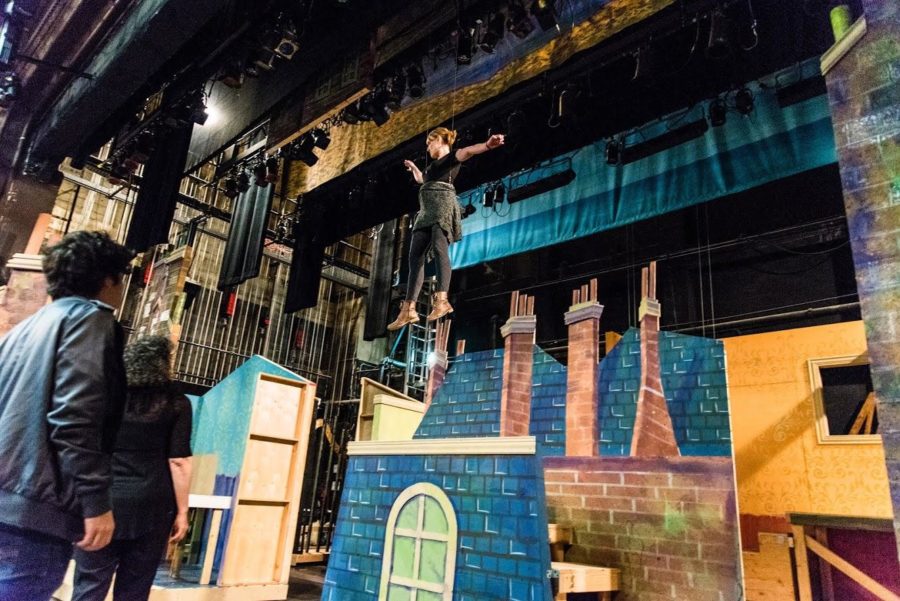 Alanna Weatherby, who plays Mary Poppins, was hesitant to fly at first because of her fear of heights, but after her first time in the air she loved it.

In early “Mary Poppins” books, a bird flies in and talks to the twin toddlers, John and Barbara Banks, whom the movie adaption does not mention. They have conversations until eventually the bird comes and the kids can’t understand him anymore. The bird asks Mary Poppins why that is and she responds, “They’ve grown out of their wonderment of the world.”

“It’s the biggest production SRJC has put on,” said Theatre Department Chair and Artistic Director Leslie McCauley, who mentioned the department likes to do big musical productions for the end of the fall semester, during the holiday season. “It’s our gift to the community.”

According to McCauley, SRJC has been on the waiting list to do “Mary Poppins” for years. She explained that companies hold the rights to movies until all the major stages, like Broadway, have performed them, and then they release the rights. This is the reason Spreckles Performing Arts Center did “Mary Poppins” just this May.

The show has a cast of 32 people, with Alanna Weatherby playing Mary Poppins and Noah Sternhill playing Bert. It incorporates aspects of the books, movie and play, including some additional elements the cast added.

“I grew up with Mary Poppins; she was a very big figure in my life. As soon as I told my dad I was cast as Mary Poppins he said, ‘Well of course you were, you are Mary Poppins,’” Weatherby said. “It was one of my very favorite childhood shows and movies and I read the book just recently. Every single element is very heartwarming, and it inspires hope in a lot of people, which I’m definitely about. She’s such an iconic character to play and I just hope I’m doing her justice.”

Weatherby performed in her first SRJC play in 2012 in a student project, but has acted since she was eight years old, including four years with Santa Rosa High School’s ArtQuest program. She is really looking forward to playing the same role that Julie Andrews did in the 1964 Disney adaption of Mary Poppins.

“Julie Andrews was such a big, huge influence in my life and is one of my very favorite role models. She inspires me in so many ways, with her class and her sophistication,” Weatherby said. “Her quality of holding herself in very high regard but also being humble, which is one of my main rules. Always be humble. Don’t let your head get too big. You always have to keep your feet on the ground, even when you’re in the air.”

Sternhill, meanwhile, wasn’t too interested in the show initially, but auditioned to challenge himself and see if he had what is takes to be a lead.

“In the rehearsal process, I’ve really grown a further appreciation for the show. That’s when I was able to notice and appreciate the little nuances and the things that could be easily looked over,” he said. “If I wasn’t in the show, my opinion of the show would be less. Being in the show has made me grown an appreciation for it.”

Not all of the cast can be leads, but the ensemble is definitely taking to heart the saying there are no small parts. Ensemble member Coleton Wilson joined because he enjoys dancing and acting, but it’s also been a big lesson for him, especially in improving his singing.

“I’m totally fine being in the ensemble, doing all the fun dance things while the lead actors, who are really good at acting, are out there making people feel things,” Wilson said. “There’s enough acting in the dancing to fill that desire. Often times we get the more crazy, ridiculous stuff.”

Nico Netz never considered himself a singer, and this will be his musical debut, but he is happy with his part in the ensemble.

“This is a great show to be ensemble because there’s a lot of fun stuff happening for ensemble, like a lot of big dance numbers and it’s just great,” Netz said. “It’s a great musical, great show to start off and you always want to start as an ensemble. You don’t have so much pressure on you, you’re not a lead.”

“I firmly do believe that it’s the biggest production SRJC has put on. Just in terms of all the demands of the show, technical and design wise and everything,” said Gustavo Ceron-Mendoza, who plays the park keeper.

“Definitely the costumes are a lot more big on the spectacle of grandeur,” Weatherby said. “There is a lot of spectacular visual elements that go into it; we fly.”

Because every play has so many demands, SRJC has a class system to give units to those who help. There are classes for makeup, stage crafting, costumes, stage management and the music for the play, to name a few. The crew is earning units based off what they do in the show. For example an ensemble member gets 4.5 units for the show — two for dancing, one and a half for singing and one for acting — but it is different for other parts.  Most of the workers started on it once the semester began, but some have been working on it even longer.

“We have a fabulous, fabulous theater department. I am getting some instruction here that I couldn’t get from some of the top schools in the country. I feel really lucky, this is a great program to go through,” said Katie Wigglesworth, who plays Winnifred Banks in the play. “There is pure dedication and passion that comes from a lot of our educators and we have a fabulous tech department here. Maryanne [Scozzari] is one of the best costume designers I’ve ever had the pleasure of working with and we have a great core of directors’ work through here.”

While the show may impress those who see it, there has already been a lot of transformation going on with the cast behind the scenes, both in themselves and the cast environment as a whole.

“I know there is not gong to be a dry eye in the house because I know this, for me, is one of the most emotional processes I’ve ever been on. I find myself changing and adapting everyday,” Weatherby said. “It’s definitely helped with my confidence; I had a nervous quality about me before and now I’m channeling that into calm and collected and just taking a breath and going into a room and brightening it.”

Sternhill echoes the change he’s seen in himself by his growth in responsibility and a greater understanding of what he is capable of. A lot of change ensued simply because of the connection each person has with their role, especially Weatherby as she wants to mirror a lot of aspects of Mary Poppins.

“I find myself adapting into and be able to walk down the street with my head held high. Because she kind of inspires that in a lot of people, like keep that smile on your face, raise your head high, don’t worry about what the rest of the world thinks, be strange and embrace that different quality,” Weatherby said.

Wilson describes the environment as always fun but also very professional, while Ceron-Mendoza describes it as ordered chaos, but both agree to the fun experience the play is as a whole.

“It’s supposed to be happy and jolly and a good time for people so I think Mary Poppins shows to all of its audiences that life is this magical thing, if you let it be,” Ceron-Mendoza said. “I think it really speaks to like a call for self fulfillment. I feel like when people watch this show they’re gonna think, ‘I have so much potential, untapped potential that I’ve never thought about or accessed and it’s all in the realm of possibility if you just grab it and fly.’”

Real children play the roles of Jane and Michael Banks, which adds a more family environment behind the scenes.

The roles each have two children cast, and interestingly both girls cast to play Michael are children of SRJC faculty— Robert Ethington, dean of student affairs, and Jurgen Kremer, behavior sciences faculty.

“It’s not just a family oriented show, it’s a really family orientated cast process. Everyone that’s been working together has been working together for so many months, and with the kids around, there’s a really natural, warm, family-friendly feeling to being here. It’s really good,” Wigglesworth said. “This cast in particular really, really focuses on making sure that everyone feels warm and apart of the process.”

Quinn enjoys the environment and getting to know new people and Wigglesworth echoes saying her passion for the art is what gives her the confidence to continue. All seemed to have an interest in theatre in their future in one form or another.

“I can’t see my life without theater or the arts. They definitely help with everything else. It’s like a venting kind of place, you get to bare yourself. You get to show people your art. I never felt more at home than I do on stage. I feel whole,” Weatherby said. “That’s kind of what theater is about, putting yourself out there, risks and all, putting yourself out there and telling the world ‘Here I am, these are my bruises, these are my scrapes, take me or leave me.’’’

The running time will be about two and a half hours, including an intermission. Tickets are available online at theatrearts.santarosa.edu/buy-tickets-online as well as in the box office in Burbank.

“I hope that people take away what I’ve felt about the show from the beginning and that’s just keep your hopes up, keep your head up high, and just smile at the strangeness of the world,” Weatherby said.