Beauty and the Beast a joyful experience for all 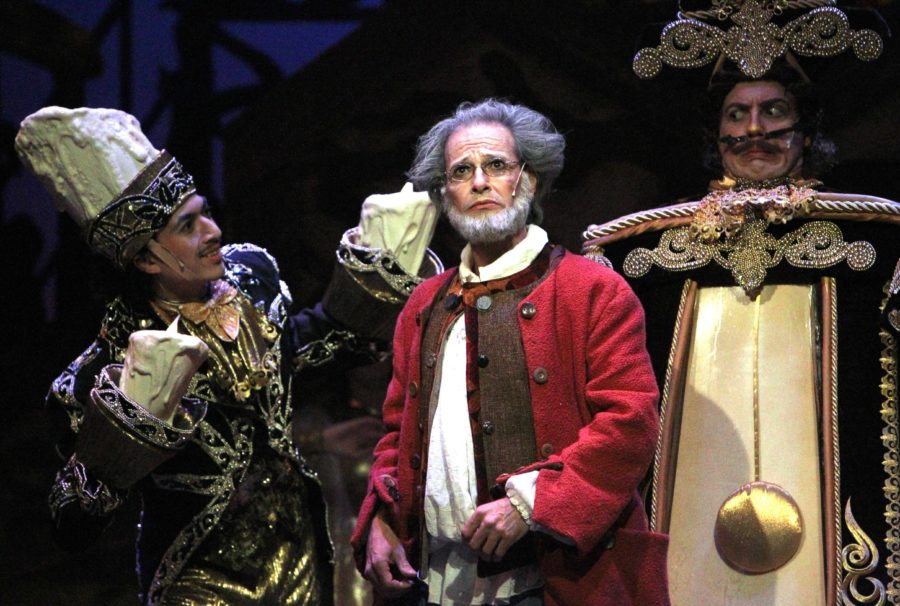 Disney released Beauty and the Beast in 1991 as an animated film, and received much praise.  Today, the SRJC Theatre Department has produced the Disney classic in time for the winter season, where families with children of all ages can attend a performance that will have them tapping their feet for their rendition of “Bonjour” to the full-ensemble finale at the end.

Laura Downing-Lee directs the current adaptation of the popular Disney film. “We selected ‘Beauty and the Beast’ last fall. It’s been long enough since it was produced, and we still have some of the original pieces here. We got the rights to ‘Legally Blonde’, and we wanted to complement it with a play that was fun for the whole family to go to,” she said.

The stage is nothing short of a triumph of budget management. Scenic designer Peter Crompton transformed the stage into an incredible display ranging from rustic French villages filled with rackety carts and Maurice’s wonderful machinery to the splendor of the Beast’s palace with its torn palisades and regal library. Costume, makeup and hair designer Maryanne Scozzari created three beautiful dresses for Belle as well as the intimidating, towering creature who is the Beast. Considering budget cuts at the junior college level, the scenic element of Beauty and the Beast shows quality more commonly associated with professional productions.

“No Matter What,” a duet sung by Brittany Law as Belle and Jimmy Jaber as her father Maurice told the audience we were in for a memorable experience. Jaber steals Act one, merrily hopping around the stage, assuaging Belle’s fears that she isn’t “normal” while providing the warmth and compassion for his daughter as only a father can.

Jaber wasn’t the only performer with a good show. Law’s performance as Belle is enchanting, her voice ringing throughout the theatre, filled with despair when being interred by the Beast, or joyous and ringing when walking through town, head buried in a book. Nathaniel Mack and Bret Mollard playing Gaston and Lefou respectfully, have great chemistry, mixing whimsical comedy with the underlying theme of Gaston’s attempt to court Belle.

The palace staff is nothing to scoff at either. Clad in a teapot so wide it makes the Michelin Man look thin by comparison, Rosie Frater as Mrs. Potts wears the full-bodied suit as if it were nothing, traversing the stage and singing with delight the whole way. Christopher Gonzalez’s Lumiere foils Evan T. Attwood’s Cogsworth perfectly, blending the stereotypical French charm with the serious demeanor of the English.

The Beast, played by Zachary Hasbany, brings a tremendous amount of emotion to the production. Hasbany towers over the entire ensemble, and without detailing his spectacular costume, impressed with his ability to wear the horns as if they were natural. Excusing a few instances where his costume unraveled at the top, the Beast thunders through Act Two, making the romantic themes in the production so believable.

A few elements of the production seemed confusing. Downing-Lee said that she wanted to personify the fact that the palace is enchanted by adding two dancers whose sole purpose is to help keep the stage flowing and alive by interacting with objects and becoming part of the palace itself. While a novel idea, the dancers didn’t sell their purpose clearly enough to warrant their exposure in the production. Also, in certain ensemble pieces such as “Gaston” and “Be our Guest,” the ensemble frequently drowned out the soloists.

“Beauty and the Beast” is a great production. The SRJC theatre department turns a Disney classic into a Broadway hit. Anyone looking for a fun family feature or a Disney enthusiast of any age seeking a live-action rendition of the film can get tickets at www.santarosa.edu/theatrearts or by calling the box office at 707-527-4343. Tickets range from $10-$18. Beauty and the Beast is recommended for ages 7 and above. Play times are at 7:30 p.m. Nov. 30, Dec. 1,6,7 and 8  and at 1:30 p.m. Dec. 1,2 and 8.