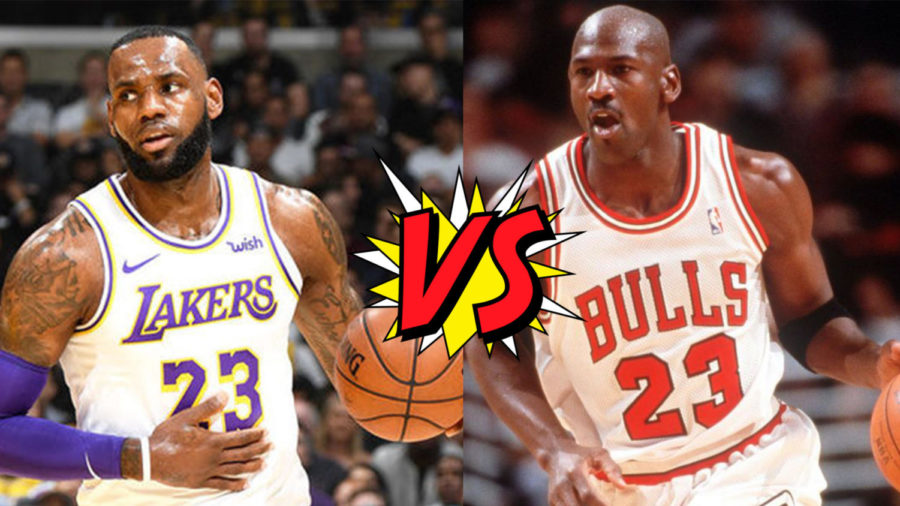 More often than not Michael Jordan takes the cake in the Greatest of all Time (GOAT) debate. Most people arguing in favor of this are those that have a strong knowledge in sports analytics. But most saying that Michael Jordan is the GOAT have one fault that invalidates all credibility of their sports knowledge.

They don’t recognize LeBron is the true GOAT.

Two men who don’t recognize this are Stephen A. Smith and Max Kellerman, who co-host ESPN’s First Take.

While their views on most sports topics are widely respected, their M.J. vs LeBron segments during the morning show are disheartening. The claims of these two are biased and nostalgia-centric. LeBron James, aka “the King,” is clearly the best basketball player ever.

It is understandable to be hesitant in admitting this, but at this point in his career it’s undeniable. Yet, every day people decide to refute this reality.

Many times, the First Take hosts glaze over some of the most impressive feats of LeBron’s career; LeBron’s career trajectory is unique and unmatchable.

LeBron James also didn’t join the NBA from college ranks; he came straight out of high school. Unlike M.J. who entered the league at 21 years old, LeBron entered when he was only 18.

From the moment he was noticed in 8th grade, James had the highest expectations for a player in the history of basketball. Later, sports outlets like ESPN had labeled him “The Chosen One.” And when he got to the league, he did not disappoint.

LeBron James continued on to win Rookie of the Year, but he didn’t stop there. Over the course of his 15-year career, LeBron has amassed as many accomplishments as M.J. did in his 15 career seasons.

LeBron has made 14 all-NBA teams, contrasting Michael Jordan’s 11. He also beats M.J. in a multitude of major career averages including career points, assists, rebounds and playoff wins. Even though LeBron is not known for being a scorer, he averages 27.2 points per game (ppg).  This is only two points lower than MJ’s career total with three less shot attempts per game. He shoots 50 percent from the field. Jordan ended his career at 48.

Many LeBron detractors bring up the fact that Michael Jordan never lost in the NBA Finals. They love to mention LeBron’s 3-6 Finals record.

Michael Jordan’s overall legacy and cultural impact cannot be denied as otherworldly. While most of these arguments seem viable, some more reading-between-the-lines would prove quite the opposite and a narrative is unveiled that most MJ stans don’t like to admit.

The most widely argued point is that M.J. has six championships in a tougher era as opposed to LeBron’s three in a softer era. This is simply false.

The “hand check” rule was actually eliminated in 1994, 3 years before M.J.’s last 3 championships.

M.J. may have had six championships, but he was playing against worse competition than LeBron was.

LeBron also had to face teams like the Golden State Warriors, who have four all-stars, two future hall-of-famers and arguably the greatest shooter of all time, Stephen Curry

Michael Jordan never had to challenge teams similar in difficulty because he was ON those teams. The Michael Jordan-led Bulls teams WERE the Warriors of the 90’s. M.J. never played in a Finals game where he was the underdog, while LeBron has only been a favorite to win the series once total in his career. Ironically, Miami Heat lost to the Dallas Mavericks in 2011.

If rings determine the GOAT, then Bill Russell should be the GOAT with his 11 championships.

Furthermore, people also like to forget the trouble Jordan had getting to the Finals. M.J. didn’t win his first championship until seven years after he started. In those seven years, M.J. was swept in the first round of the playoffs three times and lost twice in both the Eastern conference semifinals and conference finals. He didn’t win a ring until fellow hall-of-famer Scottie Pippen was traded to the Chicago Bulls as a rookie in 1987.

Beyond the ring debate, there must be something Jordan has over James. Surely his social impact would put him over the top. But he wasn’t the kind soul many remember him being.

Most people don’t know Michael Jordan is less than perfect and even regarded by several teammates as somewhat of an “ass.”

Let’s not forget that Jordan once punched a teammate during practice. That teammate, Steve Kerr, is now the head coach of the illustrious Golden State Warriors. He also squirmed his way out of trouble regarding a scandal that would have tarnished his legacy.

Most know that Jordan retired in the mid-prime of his career to pursue professional baseball. Nobody saw this coming and it shocked the world. However, few know that he may have been avoiding a suspension for gambling during his NBA hiatus. Instead of taking the heat during his career, M.J. decided to “retire for baseball” only to come back to basketball a year and a half later, the same amount of time he would’ve been suspended. While this is purely speculation, it is interesting to see people claim Michael Jordan as their hero solely based off of his on-court resume.

Ultimately, LeBron wins over M.J. in almost every important statistical category and every 90’s competition bias is debunked. Besides a dying shoe line, legacy beyond the basketball court is not something to brag about for Michael Jordan.

Everyday people choose to deny LeBron his rightful spot on the top of the basketball kingdom. And more likely than not, this will never change.

But almost anyone who looks at the stats and reads between the lines with a clear lens will agree, against first inclination or not, LeBron James is the GOAT.