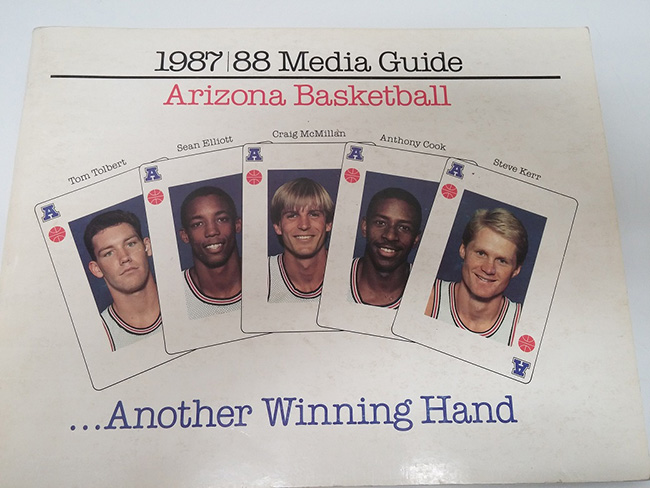 Courtesy of All Sports Tuscan.com

Long lines of spectators crammed inside the small gym. News vans with reporters scattered throughout the high school parking lot. Sports commentators that I had recognized from TV sat beside me and watched with amazement. These are times I will never forget.

Growing up in Cloverdale during 1983-84 was an exciting time in my life. The high school varsity basketball team, led by small town phenomenon Craig McMillan, dominated the Redwood Empire, making national news headlines.

Playing for McMillan during his junior and senior year of high school was unreal because of all the media attention he received. He was a celebrity coach who all kids admired and looked up to.

McMillan grew up spending much of his youth in a basketball gym. “I was fortunate that my dad was a successful basketball coach at Cloverdale High School, so I grew up in the gym since the time I could crawl,” McMillan said.

When Craig McMillan was a freshman, his father  John, who coached the Cloverdale high school team, moved him up to varsity, where the father- son duo took form. John spent many years teaching his son the game and now it was time for the big payoff.

“My sophomore year our team won the Northern California finals, and because of that exposure, I began to get awards,” McMillan said. “Recruiters started taking notice and began coming to our games.”

The following two years the Eagles went undefeated, winning back-to-back state championships with a 29-0 record. Along with the two titles and breaking Redwood Empire records, McMillan was selected as a McDonald’s All American, a prestigious award given to the top 21 high school players in the nation.

Some of McDonald’s notable All Americans were Michael Jordan, Kobe Bryant, Shaquille O’Neal and LeBron James; to name a few.

Soon it was time for McMillan to decide what university he wanted to attend. Schools such as Stanford and UCLA looked to recruit him, but McMillan was persuaded by head coach Lute Olson to play at the University of Arizona.

Before Olson’s arrival in 1983, Arizona’s basketball program was not doing well. They only made it to the NCAA tournament three times in 79 years, but with Olsen as the coach, things would soon change.

McMillan was Olsen’s first recruit who signed with Arizona for the 84-85 season. The next four years McMillan helped lead the Wildcats in four NCAA tournaments. His senior year the team made it to the 1988 Final Four, which is the furthest this group had ever gone.

“That year we had a group of really talented guys,”McMillan said.“Not just in basketball but everything they did.”

Some of the players on that team went on to have impressive careers in and out of sports.

Steve Kerr went on to play 15 seasons for six NBA teams and won five championships. Kerr is now in his third year coaching the Golden State Warriors and has brought the team to back-to-back NBA Finals, beating the Cleveland Cavaliers in 2015 and losing the following year.

Tom Tolbert played seven seasons in the NBA and is currently a radio show co-host on KNBR in San Francisco and a color commentator for all Warriors home games.

Other notable players are: Kenny Lofton a MLB six-time All Star, Sean Elliott who played 12 seasons in the NBA; Harvey Mason Jr. a seven-time Grammy Award-winning songwriter, record and movie producer who has worked with artists such as Michael Jackson and Beyonce; and current LA Lakers assistant coach Jud Buechler.

After his final season was over, McMillan took on a journey of his own. Upon finishing his bachelors degree. He was offered an assistant coaching job at Marquette University.

After coaching at Tennessee, McMillan was offered a head-coaching job in Kuwait where he coached for three years. He then moved on to coach in Lebanon for a year.

“It was my first head coaching experience,” McMillan said. “I was able to travel around and experience different cultures. It was a great change of pace and I really enjoyed it.”

In 2001, a coaching opportunity opened up in the county where McMillan once dominated in basketball. The Santa Rosa Junior College men’s basketball program was hiring for a head coach — the rest is history.

“I had not planned to be overseas forever. I had young kids at the time and wanted to be back in the United States, so when the job here at the Santa Rosa Junior College opened up, it seemed like a great fit and I was really excited when I was offered the job.”

With a B.A. Degree at Arizona and a M.A. Degree from Marquette University, McMillan knows the importance of a good education. Where some coaches see winning as a top priority, McMillan takes his own approach.

“You like to have team success but, more important to me I like to see our players get a good education. I would say 95 percent of the guys that have played two years for us have graduated and moved on to a four-year college.”

This season the Bear Cubs are ranked No. 1 in the Big 8 Conference. The team has proved itselves capable of winning another state championship. With more than half of the team contributing and ranking high in the Big 8, the Bear Cubs are competing furiously to stay in first place. With only a few weeks left until playoffs, the pressure is on.