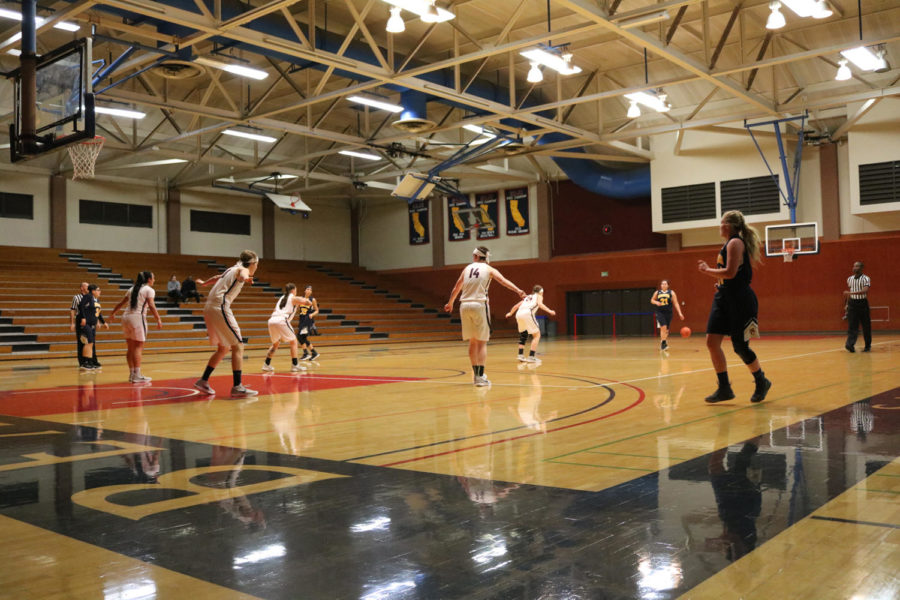 The Bear Cubs post offense and long range scoring helped them coast by Mendocino College on Dec. 7 at Haehl Pavilion.

After a tough road trip of hard fought games, the Santa Rosa Junior College women’s basketball team cruised by the Mendocino College Eagles 81-41 on Dec. 7 back home at Haehl Pavilion.

In their first home game of the season, the Bear Cubs (2-3) came out with a lot of passion—putting up 25 points and limiting the Eagles (0-4) to seven points in the first quarter.

“The first home game is always tough, they are so excited to be back home,” said SRJC head coach Lacey Campbell. “Getting this first win at home is a huge confidence boost and it meant a lot for the girls.”

Points were easy to come by as the Bear Cubs dominated in the post and kicked it out to the three-point-line with ease.

“This has been something we have been practicing for a while with our guards and forwards,” Campbell said. “When to kick it out and when to shoot it.”

At halftime the Bear Cubs led 45-16 and didn’t look back.

“It was very exciting, especially getting a victory at home,” said freshman guard Britta Irvine, who finished with three points and four rebounds. “Having the choice of either to put it down low or kick it out was a huge help on this night.”

The Bear Cubs hit 50 percent of their three pointers going 8 for 16 from behind the arc.

After three quarters the score was 65-26.

“We just gotta keep believing in ourselves,” Campbell said. The confidence has to be high in order to keep winning.”

Entering the second half, SRJC put the game into cruise control letting the bench go to work, sealing a victory with a final score of 81-41.

The Bear Cubs will take on East Los Angeles College during the Rams Classic Tournament at 7 p.m. on Dec. 15 in San Francisco.