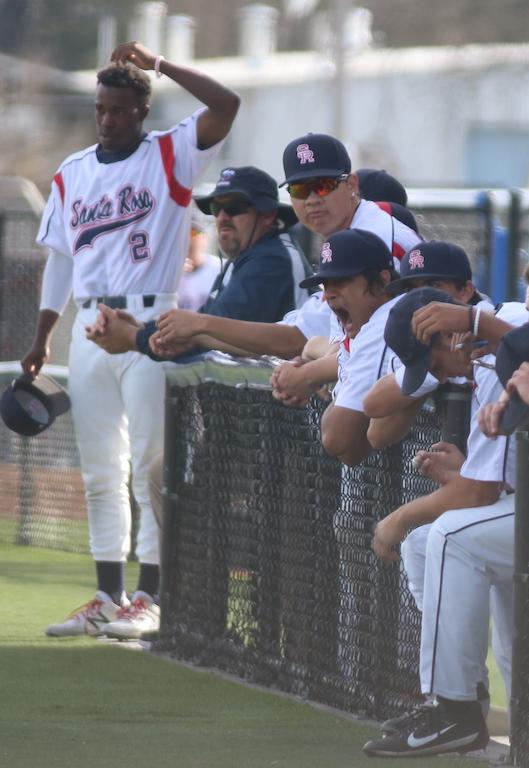 Outfielder Benjamin Pigg and members of the Santa Rosa Junior College baseball team look on during game two of the Sac City Series.

The Santa Rosa Junior College baseball team avoided a devastating three-game sweep by the Sacramento City College Panthers with a 4-1 away win Feb. 11. SRJC lost 7-2 Feb. 7 at Sac City followed by a 10-3 defeat at home Feb. 9.

In the first game, SRJC [14-4, 4-2] took a 1-0 lead in the top of the second inning with Josh Lenney’s RBI single to left field. But that disappeared in the bottom of the third when Sac City [14-5, 5-1] scored on a groundout to short after starting the inning with a double and a single.

The Panthers scored two runs in the bottom of the fourth inning for a 3-1 lead. Sac City loaded the bases with two singles and a walk with nobody out. SRJC starter Evan Hill got a double play to possibly limit the damage to just one run, but the next batter singled to drive in the second run of the inning and Hill was pulled from the game.

SRJC made it a 3-2 game in the top of the fifth with three straight two-out singles from Matt Kimura, Devin Ogston and Blake Berry.

Sac City loaded the bases again in the bottom of the fifth inning and broke the game open. Sac City scored four runs in the inning on one hit for a 7-2 lead.The Bear Cubs missed a couple of key opportunities in the second game of the series.

The Bear Cubs missed a couple of key opportunities in the second game of the series.

SRJC loaded the bases with nobody out in the bottom of the first inning but could not score. Ryder Kuhns struck out, Lenney lined out to short and Jeff Bart struck out.

In the top of the third inning SRJC reliever, Shamus Lyons got two quick groundouts to short to start, but Sac City loaded the bases with two walks and a single. Sac City hit a bases clearing triple and followed with a double for a 4-0 lead.

Kimura hit a two-out double to get the Bear Cubs a run in the bottom of the fourth, but the Panthers scored five runs in the top of the fifth inning with four singles and two walks to make Sac City’s lead 9-1.

In the first two games of the series, SRJC used nine pitchers. They allowed 16 earned runs, 21 hits and 14 walks.

“Nine bases on balls. We can’t defend against that,” said assistant coach Tom Francois after the Bear Cubs defeat in Game 2. “There’s no defense against a base on ball—there’s none—and four of those score. What can you say. That’s just disappointing.”

Garrett Hill turned the Bear Cub’s pitching woes around in the final game of the series with five shutout innings, four strikeouts and one walk.

His performance allowed SRJC to break through the pitcher’s duel first in the top of the fourth. Berry drove home two runs with a single to right field and Teasley drove in another with a sacrifice fly to right field to give SRJC a 3-0 lead.

“We knew we had to get at least one win,” Noonan said. “We dropped the first two [games] by giving them too many opportunities with walks. Garrett knew he needed to come out and pound the zone, which he did, and I just tried to do the same thing.”

Kimura drove in his fourth run of the series with a one-out single in the top of the sixth inning to make the Bear Cubs lead 4-0. Kimura, who’s hitting .220 with 8 RBIs this season, went 5-for-11 with a walk, double, triple, 4 RBIs and 3 runs scored in the series.

Jared Noonan closed out the game pitching the final four innings for SRJC. He allowed one run on three hits and one walk, while striking out five batters.

“We have to work on some mental toughness,” Francois said. “That’s one of the things we’re lacking right now, but they’ll get there. I’ve seen this before.”