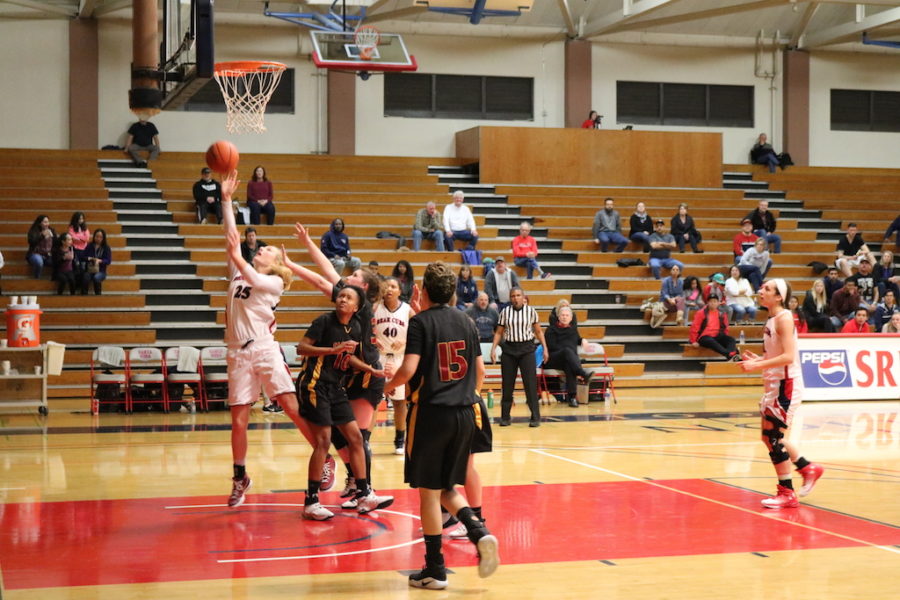 Tiffany Salinas doing work in in the paint

As the second quarter took off it remained a close game as both teams began demonstrating much more physical play.

Meghan Case of Sacramento City College hit a three with 1:14 left in the first half, tying the score at 26-26.

Salinas and Sadie Irvine lead the team in points at the end of the first half, both with six.

The Bear Cubs kicked off the third quarter with two offensive rebounds by Salinas, leading to a three by Irvine.

As the third quarter got into its last two minutes, the home crowd began to erupt with shouts and screams as the score began to break away with a 40-31 Bear Cubs lead to finish the third.

With 5:30 left in the fourth, the Bear Cubs got sloppy with its defense and fans got anxious. The score stood at 41-38.

Two minutes later the Bear Cubs took control of the game, and the lead grew to 47-39.

SRJC’s league record improved to 2-4 with the victory. Sacramento City came out ready to play with only six players on their roster and kept it a close game. But the Bear Cubs kept the lead the entire game, with the exception of one lead change in the first quarter.