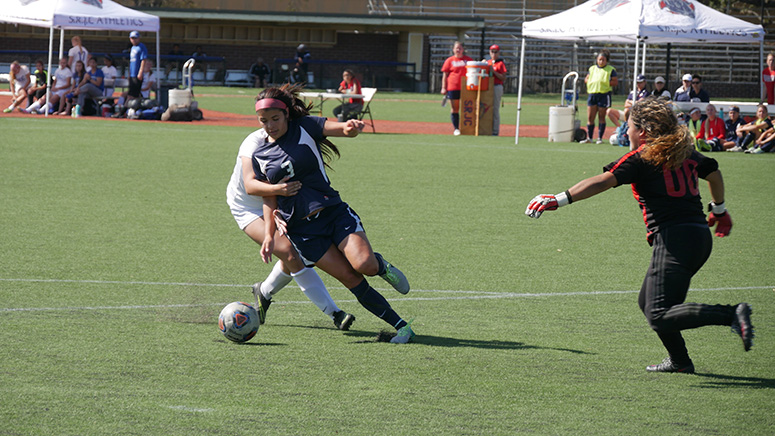 SRJC's first-year Pricilla Villalobos fights through a defender in the Bear Cubs' 4-0 shutout on Sept. 30.

The Bear Cubs took control early and dominated throughout their game against the Modesto Junior College Pirates ending in a 4-0 victory Sept. 30.

“We have been focusing this week on playing our style of game,” said coach Crystal Howard. “We’ve been working real hard keeping the goal line against us and this week we’ve walked away with zero goals against us in both games.”

Megan Stavish started off with the first goal in the 15th minute.

“I feel good about how we played today,” said Stavish. “But I think our communication could of been a little better.”

Nikki Elliot scored second for the Bear Cubs and was assisted by Amanda Galbraith.

“I feel like we started early dominating today’s game,” said freshmen Pricilla Villalobos. “We have a goal every game and that’s to score the first goal and end with a shut out.”

The next two goals were scored both by Galbraith giving the Bear Cubs a 4-0 victory over Modesto.

“We are 3 weeks into our conference, “Coach Howard said. “We’ve played 6 games in our conference so I tell them every game is a battle and it’s important that we remain consistent game in and game out.”

The Bear Cubs’ next game is against American River College Oct. 11 at Cooks Sypher Field