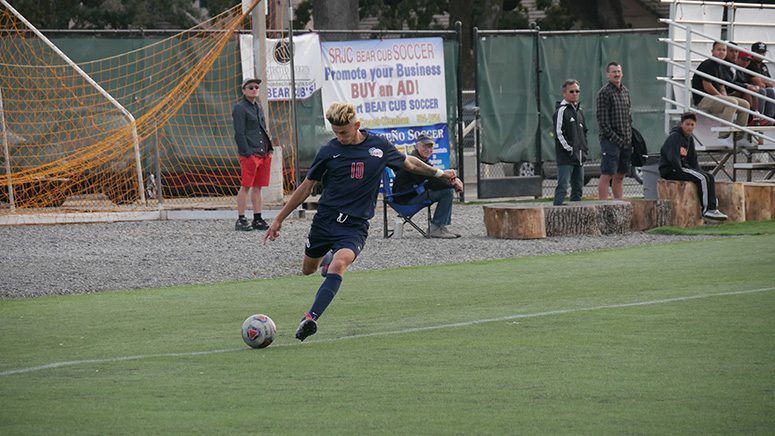 SRJC forward Wilson Briggs attempts to save the ball before it goes out of bounds on Sept. 30.

The SRJC Bear Cubs won their conference home game against the Consumes River College Hawks despite having several sick players, limiting the full potential of the team on Sept. 30.

“We had about 6 guys who were out sick yesterday,” said Coach Marty Kinahan.

“And a couple of guys today weren’t feeling well, so it was a bit frustrating.”

Consumes River took control early on in the first half by scoring the first goal in the 32nd minute giving them a 1-0 lead.

“I feel like we came out too relaxed in the beginning and thats how we got behind,” said freshman Dominiq Laird. “We didn’t have our best performance but we still fought hard throughout the entire game.”

The Bear Cubs soon gained momentum with Samuel Richter scoring in the 34th minute assisted by Darian Huerta, which tied the game 1-1.

“I was open and I called for the ball” Richter said. “Darian Huerta passed it to me and I was able to score.”

Santa Rosa came out stronger in the second half keeping the ball closer to scoring position.

“They out played us in the first half,” Kinahan said. “We gave up a soft goal, but we responded well and by the second half we had more control over the game.”

“It felt good to see the team take more control of the game in the second half,” Ochoa said. “I was happy I contribute when I did.”

Consumes River quickly responded with another goal and tied the score at 2-2 in 71st minute of the second half.

In the final minutes of the game, Ochoa assisted Kevin Juarez in scoring the winning goal giving the Bear Cubs the victory 3-2.

“I feel like we fought strong and didn’t give up,” Juarez said. “We just kept playing hard and we ended up with a win.”

Their next game is home against Modesto Junior College on Oct. 4.