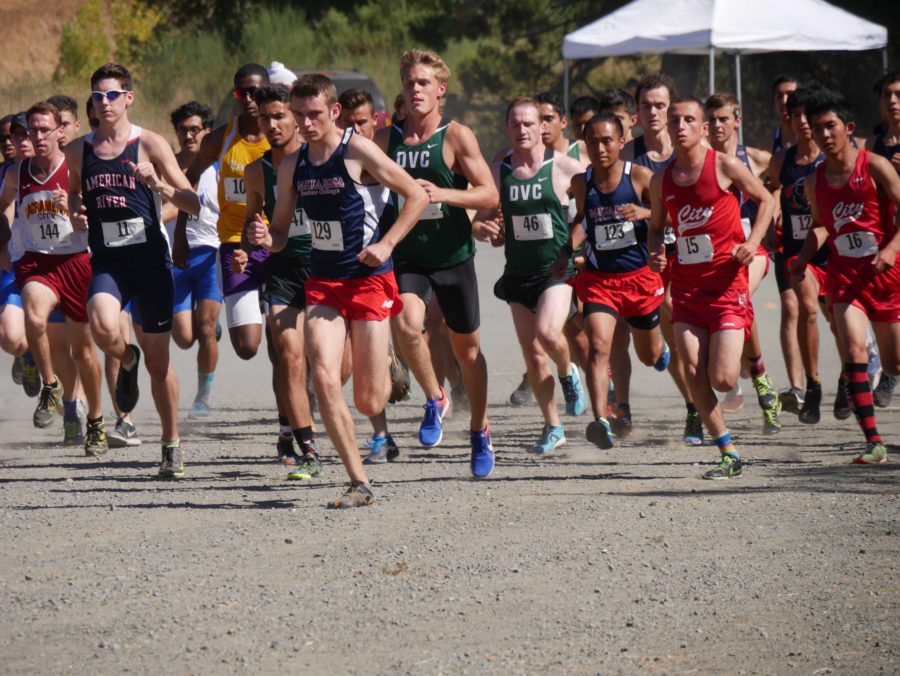 SRJC men's cross country team get out to a fast start at beginning of the race on Fri. 16

The women’s team started off the day with a positive attitude. Although few members were missing due to illness, it was still ready to take on the competition.

“I was really nervous at first but I decided to go out there and do my best,” Law said. “I hoped to place in the top five and I did, and now I’m very happy.”

Head coach David Wellmen was at the finish line taking down the times as the runners came in.

“I feel pretty good about the women’s team this year,” Wellman said. “We’re still trying to get the team together. Once we get our solid five, I feel we’ll be pretty good.”

Freshman Claudia Provan finished 21st in the race in her first ever college run.

“I’m a little upset because I thought I’d do a lot better, but I do know I did my best,” Provan said. “I went out way too fast in the beginning and wasn’t able to keep it, so now I know for the next time.”

Not all racers finished where they hoped to, like sophomore Ana Drake-Trip who placed 17th.

“I’m a little bummed,” Drake-Trip said. “I wanted to break 22 [minutes] and I was two seconds off, but I still feel pretty good about my performance.”

The men’s team took third place in the tournament.

Freshmen Brandon Escandon finished 9th with a time of 22:15.7.

“I feel I did pretty good and I gave it all I had,” Escandon said. “Towards the end I got really tired but I made it.”

Zachary Nussdorfer followed right behind Escandon with a time of 22:16.2.

“Honestly it was the best race I’ve had all season,” Nussdorfer said. “Brandon really pulled me through the end there. I went out there strong and finished strong, so there’s nothing to complain about.”

“It was the best race so far this season,” Coach Wellman said. “I think that a lot of people showed up today and really raced with confidence and it was exciting to watch.”

The next cross country meet will be the Sonoma State Invitational 9 a.m. Oct. 1 at Spring Lake.