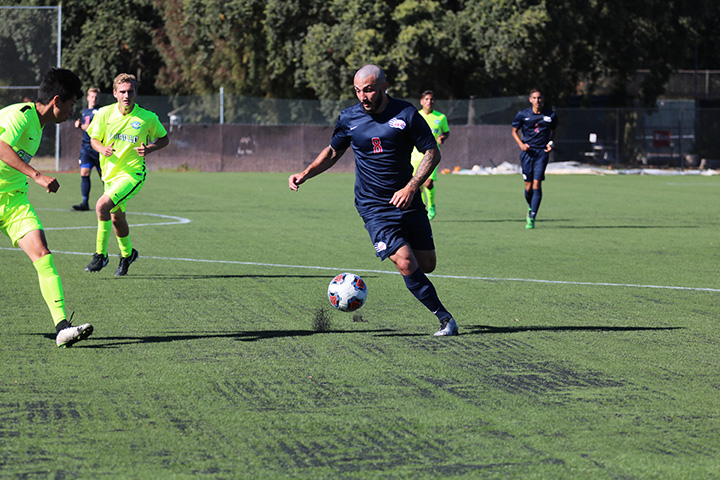 The Bear Cubs had a strong start to the match, forcing Cabrillo into their own defensive zone right off the opening kickoff.

The early attack led to Briggs hitting a wide open Ochoa with a perfect pass, who tucked the ball into the right corner of the net just four minutes in.

The game opened up later in the first half, but the Bear Cubs would make the most of their chances. A strong push in the 30th minute from the SRJC offense forced the ball into the box, where Ochoa would strike the loose ball into the net to double the lead.

Ten minutes later a foul  by the Cabrillo defense led to a yellow card and a penalty shot for SRJC’s Ian Rumbaugh, who made no mistake on the attempt and made it 3-0 going into the second half.

With command of the scoreboard, the Bear Cubs sat back on the lead and went into defensive mode.

Despite a solid backend and some excellent goaltending from David Hernandez, Cabrillo would find an opening through the SRJC defense at the 70 minute mark to cap off the match.

Despite the outcome, it’s clear that the players and SRJC head coach Marty Kinahan have high hopes for the season.

“We got up early on them and then we kind of relaxed,” Kinahan said after the game.

“My expectations would be we improve on that kind of stuff and we learn how to put games away,”.

Both Ochoa and Briggs would echo their coach’s remarks after the game.

“We started out strong,” said Ochoa, “We kind of let down in the second half and we needed to pick it up but we’re heading in the right direction.”

Briggs agreed with his teammate’s assessment of the game. “I think we need to improve on finishing the the game out,” said Briggs.
The Bear Cubs will look to continue their winning ways at home against Contra Costa on Friday at 4pm.