‘Setting’ SRJC volleyball back on top 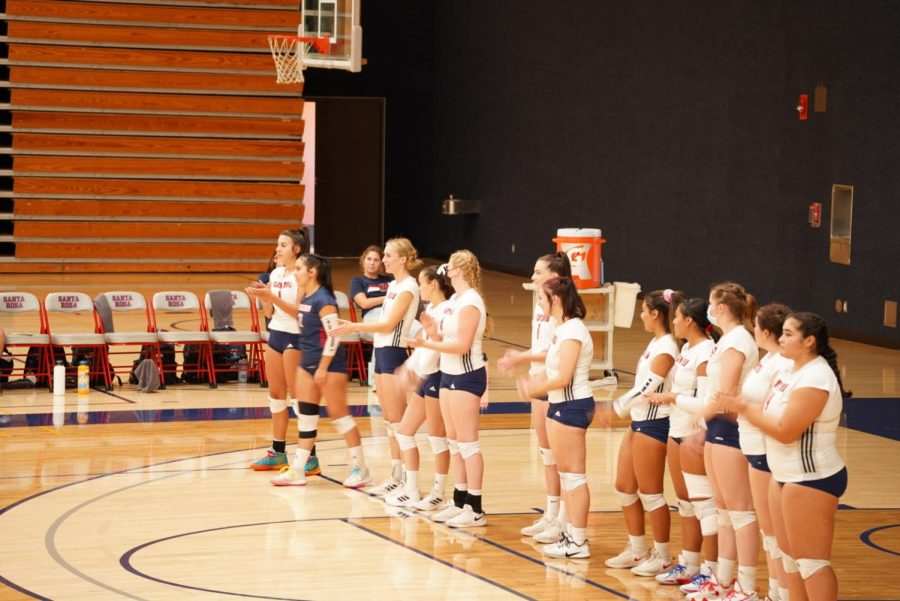 The SRJC volleyball team lines up before its game against Modesto Sept. 21 in Haehl Pavilion.

“We want to make it to the playoffs, so that is a big priority for this group. We have a lot of returners that are coming back and we’re looking forward to going deep in the regional playoffs,” said head coach Ally Sather, entering her fifth season at the helm.

The competition in the Big Eight Conference is far from lackluster. Five of the nine teams in the conference are Top 25-ranked, with the three other teams ranked within the top 35 in California.

Sather has taken advantage of her veteran group, being able to use more difficult but rewarding game plans. “We are working a lot more on strategic offenses and defenses that we haven’t gotten to do in the past because this is a more experienced group,” Sather said.

Chemistry is not forced with this team. “We play music at practice,” Sather said. “They are known for some dancing in between drills and [it] keeps the gym atmosphere nice, light and fun. It makes it where everyone enjoys their experience here.”

The theme of unforced chemistry continues with twin sisters Kaleigh and Emma Weiand, along with Lilah Bacon, who all played at the same high school. Most of the players on the team are local and have played against or with each other in the past.

Not lacking confidence in her team, coach Sather is ready and trusts her players to make this deep run. “We are letting them have more autonomy and decision making, which has been fun,” she said.