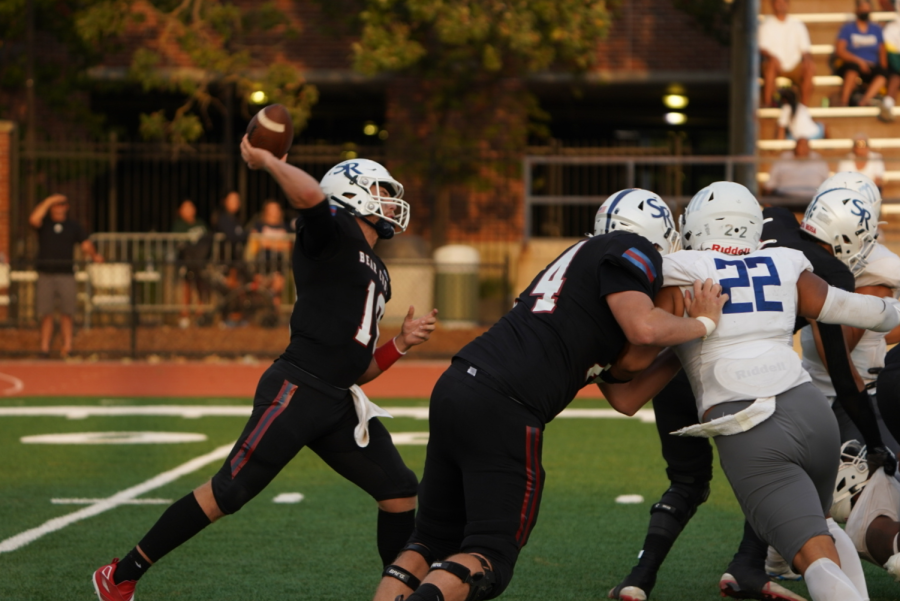 Quarterback Carson Budke throws the lone score for the Bear Cubs, a 81-yard touchdown pass to Andre Duvall in a 15-7 loss vs. Modesto on Sept. 10 at Bailey Field.

Santa Rosa Junior College’s football team had a chance to tie the game at the end of the fourth quarter, but turned the ball over on downs in a dramatic finish on Sept. 10 at Bailey Field.

A muffed punt was the biggest mistake for the Bear Cubs in the 15-7 loss to the #21 California Community College Athletic Association ranked Modesto Junior College Pirates. The Pirates capitalized on the mistake, scoring their first touchdown of the game to make the score 9-0 heading into halftime.

Earlier in the game, Santa Rosa gained possession on their own one-yard line after a monstrous goal-line stand by the defense. Two plays after the stand, running back Adrian Torres was swallowed up in the endzone and Modesto forced a safety.

“When you play all good teams like we do the margin of error is so small,” Head Coach Lenny Wagner said. “It comes down to who makes the least amount of unforced errors.”
A gritty defensive performance
Two goal-line stops shifted the momentum back to Santa Rosa when all hope had been lost. However, the offense was unable to score any points on the ensuing drives. As a team the Bear Cubs forced four sacks and 10 tackles for loss.

Cornerback Yonaton Isack was the defensive star on Saturday night. Isack displayed he can do more than just cover, racking up a team high 15 total tackles. Two of Isack’s tackles would save Modesto from scoring.
Quarterbacks continue to rotate
On the night, quarterback Carson Budke threw for 142 yards and one touchdown. Most of his stats came from a 81-yard touchdown pass to wide receiver Andre Duvall that made the score 9-7. Duvall burnt his defender on a deep-post route and broke away for the Bear Cubs’ lone score.

Santino Chavez improved completing 53% of his passes for 86 yards and no interceptions, unlike last week where he recorded one interception. Chavez moved the ball efficiently down the field, but couldn’t maximize his efforts with a touchdown.

“When one of them steps up and plays the way we want them to, they will have the job,” Coach Wagner said. “It’s [the quarterback job] wide open.”

Unless Budke or Chavez get hot both will continue to duke it out for the starting job.
Moving on to Contra Costa
“We have to lock in and put this loss behind us and be ready for Contra Costa,” offensive lineman Kaleb Torres said.