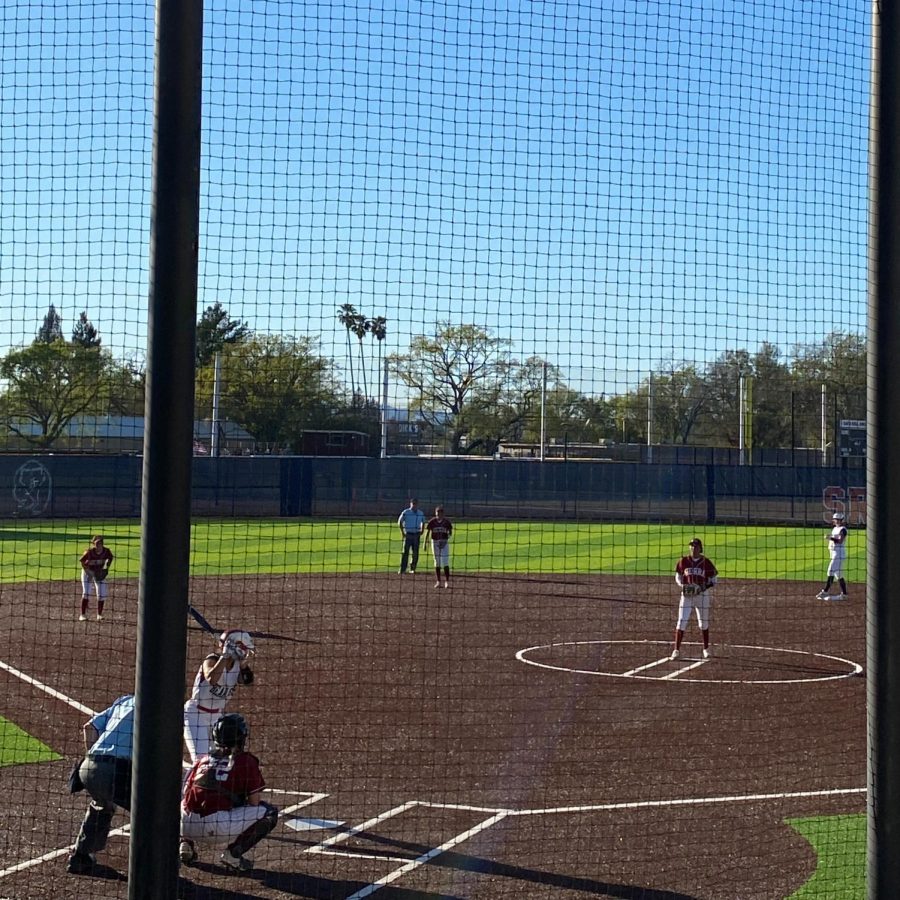 Head Coach Madison Green described the game as a “big and exciting win.”

“It is still early in conference play, but this is the type of win that brings the team closer together and gives a shot of confidence going forward,” she said.

Kaylee Drake made her 10th start of the season and lasted five innings, allowing five hits and two runs. She faced early trouble in the second, loading the bases after a Bailey Reid single to right field, followed by Sage Davis hitting into a fielder’s choice, outing Reid at second. Davis beating the throw at first. Jada Bolar made it to first after a defensive error, then Kayley Vaillette walked to load the bases with two outs. The Bear Cubs escaped the inning without giving up any runs after Jazzy Smith hit a flyout to right field.

Bear Cubs infielder Hailey Butcher started the bottom of the second with a lead-off walk, but was followed by Mandy O’Keefe hitting into a fielder’s choice and getting Butcher out at second. O’Keefe beat out the potential double play and made it safely to first. Outfielder Carmen Haugen hit a double into center field, bringing in O’Keefe to score from first, making it 1-0 SRJC. Kayla Vance made it to first on an infield hit and was caught stealing second, ending the inning.

After a three-up-three-down third from Drake, the Bear Cubs were back up to bat. After two groundouts, the offense picked up after a Hannah Hosier home run to make it 2-0 Bear Cubs. Then Drake singled to right field. Butcher walked, and then O’Keefe hit a triple to bring in Drake and Butcher to score and extend the lead 4-0. That was the end of Wolverines’ starting pitcher Amaya Sutton’s day. Bolar came in and got Kaleigh Weiand to hit into a groundout to get Sierra out of the inning without any further damage.

A second straight shutout inning by Drake brought the Bear Cubs back up. Haugen hit a leadoff home run to left field to make it 5-0. Cayla Nixon singled into left field with two outs after consecutive infield groundouts. Hosier hit a single of her own to right field, but they couldn’t capitalize on the momentum after Drake struck out.

The Wolverines got the offense rolling in the fifth after Smith singled to center field, followed by Eliana Enriquez making it to first after a bunt. With one out and two women on base, outfielder Meadow Topete hit a triple to bring in Smith and Enriquez to score and shorten the deficit. Infielder Darcy Gillan hit into a groundout, which brought in Topete to score and cut the Santa Rosa lead to 5-3. The damage stopped after Kristin Blake hit a groundout to third base.

After two groundouts, Kaleigh Weiand reached first on an error, then stole second, but the Bear Cubs couldn’t bring her in.

The offense picked back up in the sixth for the Wolverines after a lead-off infield hit by Reid, followed by Davis getting walked. That was the end of Drake’s afternoon after Haugen came in from the outfield, switching positions with Drake. Bolar then doubled, which brought in Reid and Davis to score and tie the game at 5-5. After a sacrifice bunt from outfielder Vaillette advancing Bolar to third, Smith singled into left field bringing in Bolar to score and give Sierra the lead 6-5. Enriquez got on base after another bunt and then stole second. Gillan hit into a groundout to second base to put a stop to the damage.

Vance led off the Bear Cubs half of the sixth with a single to center field, but was followed by Emma Weiand hitting a groundball fielder’s choice getting Vance out at second. Nixon then singled to right field, but they couldn’t take advantage after Hosier struck out and Drake hit a flyout to center field.

The final chance for the Bear Cubs to win the game came in the seventh. Butcher started it off with a single to left field, followed by O’Keefe hitting a sacrifice bunt, prompting Butcher to second with one out. A wild throw advanced Butcher to third. After Kaleigh Weiand walked, Haugen doubled, which brought in Butcher to score and tie the game at 6-6. Vance was then walked, loading the bases for Emma Weiand with one out. A single to center field brought in Kaleigh Weiand to score and win the game for Bear Cubs 7-6.

The Bear Cubs improved to 10-6 on the season and will travel to Sacramento for their March 12 double-header against American River College.