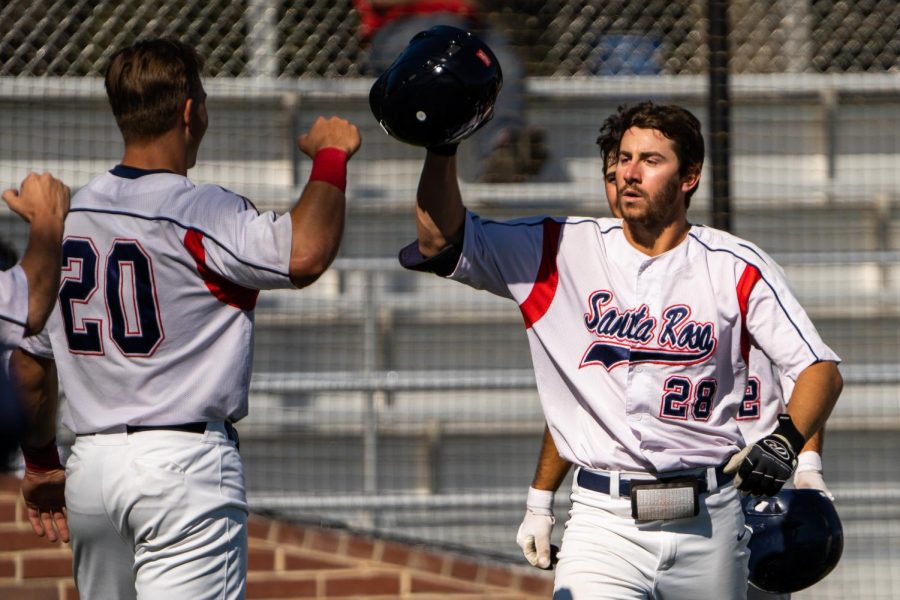 Bear Cubs infielder Noah Rabin celebrates his three-run homerun in the bottom of the 1st against the Sierra College Wolverines at Cook Sypher Field in Santa Rosa, Calif., March 8, 2022.

SRJC Bear Cubs baseball snapped its losing streak with an explosive first two innings that garnered 8 runs in a 10-4 victory over Sierra College on March 8 at Cook Sypher Field.

Sierra College starting pitcher Devin Marton struggled to find his footing and the Bear Cubs capitalized, scoring early and often. On the first at bat of the game infielder Max Handron was walked and infielder Davide Migotto followed Handron up with a line drive to right-center field. On infielder Noah Rabin’s first at bat he hit his second home run of the year with a three run shot that infused the Bear Cub dugout with energy and gave them their first three runs of the game.

First baseman Connor Charpiot, excited by Rabin’s home run, hit a double of his own and on the next at bat Charpiot tagged up on second base to set himself up in scoring position on third. Catcher Colton Lomanto hit an RBI single to earn another run for the Bear Cubs that made the score 4-0. The Bear Cubs were fired up as outfielder Zane Bennett hit a double that set up Lomanto to score.

The Bear Cubs scored their fifth run of the inning as outfielder Evan Johnson hit an RBI single up the first base side and was nearly tagged out after a controversial call. The Wolverine dugout didn’t like the call by the first base umpire, however Johnson was ruled safe and the fifth run counted for the Bear Cubs.

The woes continued for Marton as the Bear Cubs scored three more runs in the bottom of the second. Repeating the first inning, Marton started by giving up a walk this time to Migotto. On the next at bat, outfielder Jared Sundstrom hit a bouncing line drive to the Wolverines shortstop and what looked like a routine double play went disastrous when Wolverine second baseman slipped off second base making both Sundtrom and Migotto safe.

Rabin came back up to the plate with a perfect bunt straight down the left field line that loaded the bases for the Bear Cubs. Charpiot hit a flyout to left field, but Migotto managed to score after tagging up at third base. Catcher Jack Gallagher hit a single of his own to shallow left field that loaded the bases once more. Bennett saw the opportunity to put points on the board and hit his second double of the night this time with a two RBI double that gave the Bear Cubs an early 8-0 lead.

The Wolverines tried to mount a comeback in the top of the fourth, but only managed to score two runs and the next time the Bear Cubs controlled the bats they added in two more runs that once more gave them an eight run lead.

Bear Cubs’ pitcher Garrett Edy closed the last two innings and struck out three Wolverines batters, but had a shaky last inning. Edy gave up one run in the bottom of the ninth, but the Wolverines had a man on first and second when the final out occurred. The game could’ve been closer if the Bear Cubs defense fell flat in the ninth.

This was a huge win for the Bear Cubs as they earned their eleventh win of the season and they continue their second conference series against the Wolverines at 2 p.m. on March 10 at Sierra College.