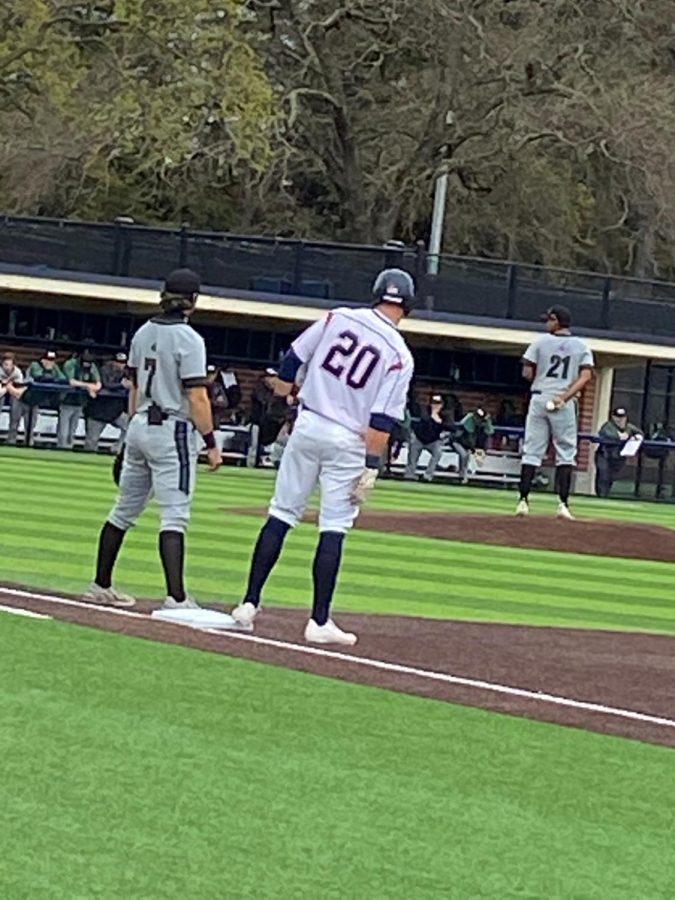 Bear Cubs outfielder Jared Sundstrom makes it to first base after Diego Moran walked him.

Tyler Stasiowski made his sixth start of the season and went 5 and one-third innings, only allowing two runs. He faced early trouble when Diablo Valley got on base after a throwing error by shortstop Max Handron, followed up by a single. With a runner on first and third with two outs, Stasiowski sent the Vikings to their dugout with a zero on the scoreboard after a swinging strikeout.

Center fielder Jared Sundstrom got the Bear Cubs’ first hit of the day on a single to third, but was the final out of the first after trying to steal second.

The game’s first score came in the bottom of the second from catcher Jack Gallagher after his home run to left field made it 1-0 Bear Cubs.

The Vikings got the offense rolling in the third after a single to center field from Keoni Coloma, followed by an Alex Merchant sacrifice bunt to advance Coloma to second. After a flyout, with two outs, Jesse Velders singled to right field, and with a missed dive by Davide Migotto, Coloma came in to score to make it a 1-1 game. The Vikings followed that up with a Bryson Horton single. With a runner on second and first, Stasiowski limited the damage to just one run after getting a ground-out to third baseman Noah Rabin.

The Bear Cubs put a runner in scoring position in the third after Bryce Cannon’s lead-off walk, followed by a sacrifice bunt from Andrew Lombardi to advance Cannon to second, but couldn’t capitalize after consecutive flyouts from Handron and Migotto to end the inning.

The Vikings got a lead-off walk in the fourth from Adam Garren, then another sacrifice bunt from Colby Finch to advance Garren to second. After a wild pitch with one out, Garren made his way to third. Samuel Brewer hit a ground ball to second which brought in Garren to score and make it 2-1 Diablo Valley. Coloma was back up to bat and got a walk, then stole second, but they couldn’t take advantage of the runner in scoring position after Stasiowski made Merchant strikeout swinging.

Sundstrom got the Bear Cubs another lead-off walk, then stole second. Rabin followed up with a flyout and Gallagher got caught looking on a strikeout. After a wild pitch, Sundstrom advanced to third but they couldn’t take advantage after Colton Lomanto struck out swinging to end the inning.

After a flyout in the fifth, Jesse Velders singled followed by Horton hitting a ground ball to third which resulted in a fielder’s choice to get Velders out at second. After a passed ball, Horton advanced to second and Jacob Williamson made it to first. The Vikings couldn’t take advantage as Garren hit a flyout to right field to end the inning.

Colby Finch reached first in the sixth after a throwing error by Rabin, followed by a Samuel Brewer swinging strikeout. Craig Essick-Jones came in to base run for Finch. Bear Cubs manager Damon Neidlinger then came out of the dugout and pulled Tyler Stasiowski after a six-hit, two earned runs, six-strikeout performance. Right-handed pitcher Sean Flowers came in for his third appearance of the season. After a passed ball, Essick-Jones advanced to second. Coloma then hit a pop-up to Handron for the second out. Another wild pitch prompted Essick-Jones to third. Flowers escaped without any damage done to the scoreboard after getting Merchant to pop up to Rabin.

It was the second straight inning for the Bear Cubs without putting a runner on base.

In the seventh, Chris Schuchart hit a lead-off double to left field, followed by Velders hitting a pop-up to Migotto for the first out. Bryson Horton then singled to right field, getting Schuchart to third. With a runner on first and third with one out, Flowers clutched up and got Jacob Williamson to roll into a double play to get out of the inning and keep it a one-run deficit.

The Bear Cubs got a runner back on base in their half of the seventh due to a Lomanto walk, but couldn’t prompt any momentum after Bennett hit a flyout.

Flowers’ day was done after one and two-thirds innings. Right-handed pitcher Garrett Edy relieved Flowers. It was Edy’s fifth appearance of the season. Garren hit a flyout to right field for the first out. Pinch hitter Daniel Vonnegut was then hit by a pitch, sending him to first. Samuel Brewer hit a ground ball fielder’s choice to Migotto, which caught Vonnegut out at second.

Brewer then stole second, with a runner in scoring position. Coloma hit a flyout to center field for the final out.

Shortstop Handron got hit by a pitch with two outs in the bottom of the eighth but nothing came of it as Migotto struck out.

Infielder Will Larson came in to pitch for the Bear Cubs in the ninth for his first pitching appearance of the season. Alex DeHzad also came into the game at second base to replace Migotto. Merchant hit a ground ball to DeHzad right off the bench for the first out of the inning. Schuchart then hit a pop up in foul territory to Bryce Cannon.

Velders walked then advanced to second on a balk. Horton singled to center field which brought-in Velders to score and make it 3-1 Vikings.

Aaron Jenkins subbed for Jacob Williamson and got hit by a pitch, advancing Horton to second. A two-out wild pitch advanced Jenkins to second and Horton to third. With two runners in scoring position, Garren singled which brought in both runners to make the score 5-1. Vonnegut then singled, Garren was going for third but couldn’t beat the throw and was tagged out. Larson escaped the inning with three runs given up off three hits.

Down four runs with three outs left, Sundstrom was the first man up and was left swinging on a strikeout. Rabin followed up with a ground ball to first base for the second out. The game came to an end on a Gallagher ground ball to Horton at third, who threw to Merchant for the final out.

Vikings pitcher Diego Moran pitched a complete game, only allowing two hits, one run, three walks and 12 strikeouts. The final hit tally was 11 for Diablo Valley and two for the Bear Cubs.

“DVC pitcher, Diego Moran, did exactly what you need a Thursday pitcher to do when you’re playing back to back games. Go deep into a game or go a complete game and save your bullpen. We did not do much offensively,” Bear Cubs Head Coach Damon Neidlinger said.