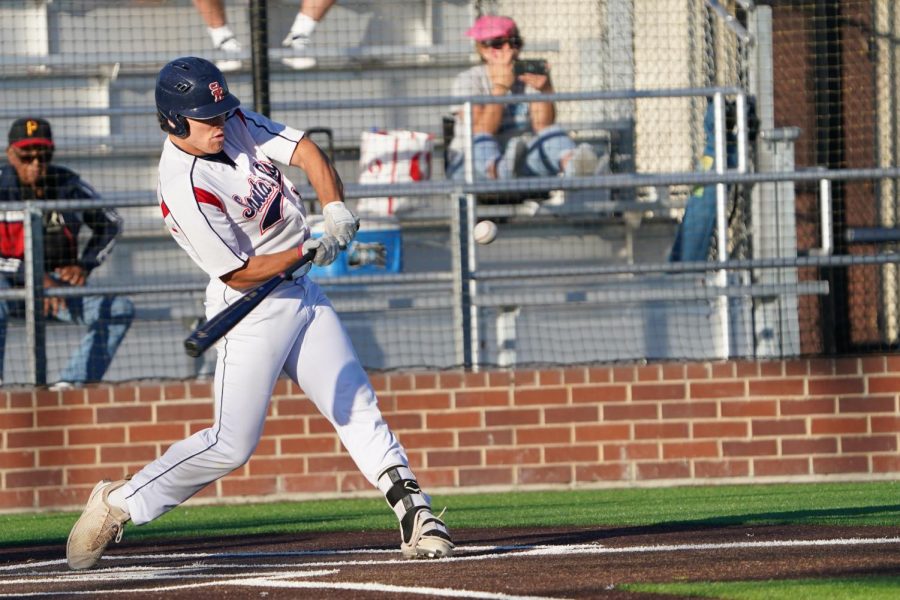 Freshman Zane Bennett launches a double into centerfield midway through the Bear Cubs's 10-0 win on Feb. 8 against Contra Costa.

Santa Rosa’s first attack came in the second inning, scoring four runs. Sophomore infielder Max Handron knocked in the first run with a single to center field, followed by a two run single hit by freshmen infielder Davide Migotto. Sophomore catcher Colton Lomanto had a sacrifice fly to bring in the fourth run of the inning.

Pitcher Garrett James lasted five innings and allowed three hits in the process to notch his first win of the 2022 season. He is 1-1 on the year.

The Bear Cubs struck again in the bottom of the sixth, scoring on a pop-up to left field hit by sophomore infielder Noah Rabin with Migotto tagging up from 3rd base. Migotto slid safe at home while Contra Costa’s catcher tried to tag him out. The score was now 5-0.

The seventh inning led to two more runs by Santa Rosa, with a RBI double from Handron and a RBI single by sophomore outfielder Jared Sundstrom. Santa Rosa now had a comfortable seven run lead.

In the final inning, the Bear Cubs scored three more runs. First, freshman outfielder Zane Bennett was hit by a pitch while the bases were loaded and advanced a runner to home plate. Handron then had his third RBI when he hit a grounder to the shortstop, who threw out a runner at second base and allowed a run to score. The second baseman tried to turn a double play, but overthrew the first baseman and allowed the tenth run on an error.

Pitcher Daniel Smith finished the final four innings for the Bear Cubs. He allowed three hits and got his second save of the season.