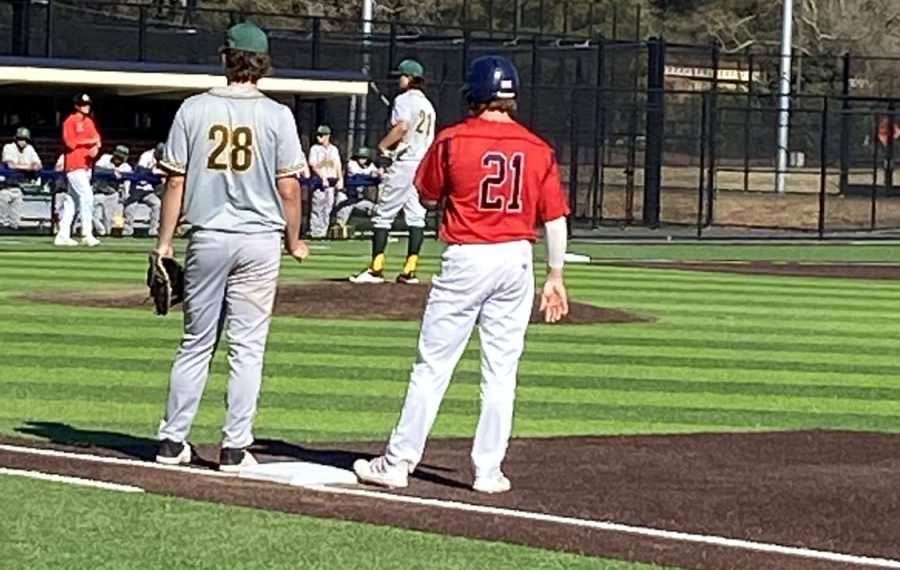 Bear Cubs catcher Colton Lomanto (21) gets on base after a single during the men's baseball team's 6-0 win on Feb. 12 against Cañada College.

Jack Cazin made his third start and settled in after a nerve-wracking second inning when Cañada loaded the bases on three consecutive hits. A Cazin strikeout and an infield grounder got the Bear Cubs out of the inning.

Davide Migotto got the Bear Cubs offense started with a single to right field, and Jared Sundstrom followed with a single of his own to right. RBIs from Colton Lomanto and Noah Rabin brought in Migotto and Sundstrom to make the score 2-0 in the first.

In the bottom of the second, Bennett led-off with a homerun to put the Bear Cubs up 3-0.

The third was a dominant one for Cazin, as he earned two ground balls, and caught one Cañada Colt looking at a strikeout.

The Bear Cubs loaded the bases in the third after Lomanto and Rabin singled, and Bennett walked, but couldn’t get the clutch hit after Jack Gallagher lined out.

The Bear Cubs raised the excitement in the fourth after a Max Handron double, followed up by a Sundstrom RBI triple, which brought in Handron to score and make it 4-0.

Cazin followed up the Bear Cubs offense with a one-two-three inning in the top of the fifth, getting a fly-out, strikeout and ground-ball.

Colts manager Tony Lucca must have seen enough as he pulled his starting pitcher in the bottom of the fifth. The Bear Cubs weren’t fazed as their offense started early on the new pitcher, a double from Noah Rabin and consecutive walks from Connor Charpiot and Gallagher.
They couldn’t capitalize on the bases loaded, as Hunter Graham rolled into a double-play to end the inning.

Any amount of momentum the Colts thought they had built in the sixth was halted after a baserunner tried turning his single into a double, but was cut short, got hurt on the slide, and ruled out.

The Bear Cubs got a runner in scoring position in the sixth after Migotto singled, and Sundstrom was hit by a pitch, but they couldn’t take advantage as Lomanto rolled into a double-play.

Cazin’s shutout six inning, six hit, five strikeout performance was over, after manager Damon Neidlinger pulled him out in the seventh and brought in Evan Johnson. The left-handed pitcher made quick work of the Colts with two strikeouts and a ground-ball.

The Colts made a pitching change of their own in the seventh. Not much changed for the Bear Cubs offense, as Charpiot walked and Bennett followed up with his second homerun to extend the lead, 6-0.

Versatile Bear Cub Bryce Cannon warmed up during the eighth to close the game out.

Cannon got on the mound in the ninth and struck out the first batter he faced but then allowed consecutive walks. With a runner in scoring position, first sign of life for the Colts in a couple innings, Cannon clutched up and sent the final two batters home with strikeouts.

The Bear Cubs improve to 6-1 on the season and await the 4-6 College of Marin Mariners 2 p.m. Feb. 15 at SRJC’s Cook Sypher field.