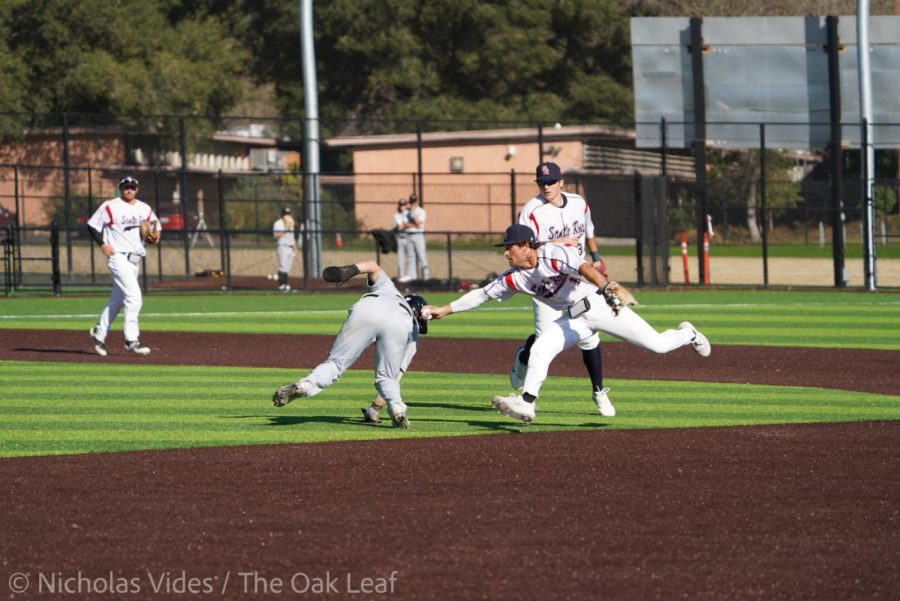 A Marin Mariner base runner gets caught in a pickle in the first inning in the Bear Cubs win on Feb. 15.

The SRJC baseball team won its fifth straight game against College of Marin behind three home runs on Feb. 15 at Cook Sypher Field.

The Marin Mariners scored two runs in the top of the second inning. After the Bear Cubs gave up two runs they made a pitching change to Daniel Smith. The Mariners didn’t score another run in the second after the change.

In the bottom of the second, outfielder Bryce Cannon hit the game’s first home run with a solo shot to give the Bear Cubs a 4-2 lead.

Smith was on fire in the top of the fifth when he struck out three straight batters.

Mariner pitcher loaded the bases on walks, then hit Charpiot on a wild pitch. Charpiot walked to first, forcing a run. Charpiot changed from first base to pitcher in the top of the seventh inning and gave up two runs in the final three innings, one in the seventh and one in the ninth. Charpiot ended the game on a strikeout and gave the Bear Cubs a 10-5 victory.