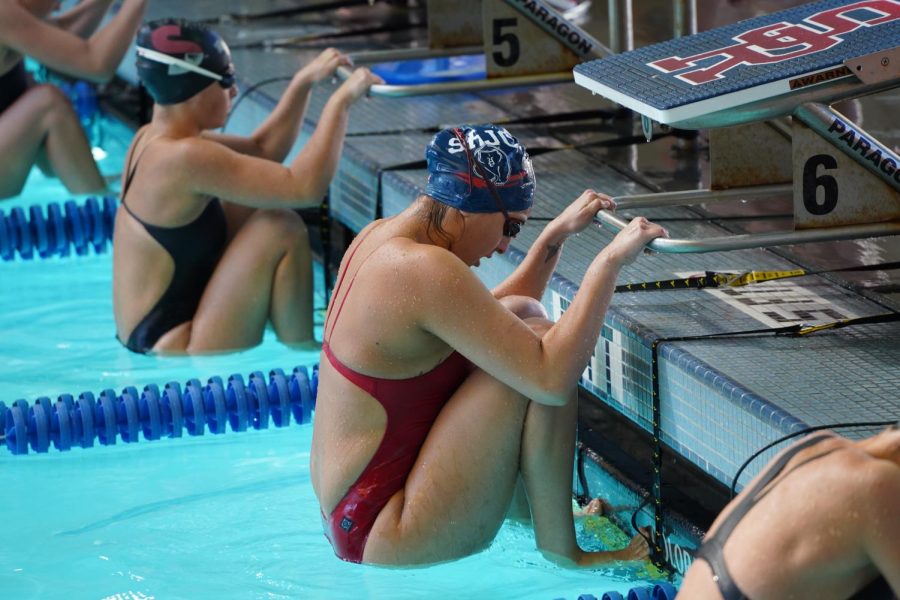 Santa Rosa Junior College hosted the first NorCal Relay since Pre-pandemic on  Feb 12 2022,  the first of many more to come.

SRJC swimmers have competed in only 10 meets in the past two seasons, six in 2021 and only four in 2020. Things have not been normal to say the least.

“Two-plus years of extremely difficult circumstances as far as connecting with and providing opportunities with our student athletes,” Head Coach Jill McCormick said.

Sophomore swimmer Lila Clarkson is ready to take advantage of the return to a more normal season. “My goal is to continue to bond with the team more in person, especially after the last two years,” she said.

COVID-19 hurt the team dynamic, Clarkson said. “It was harder to get to know everyone while we had to keep a distance. Now that we’ve been able to really bond with each other, we feel more like a family.”

While team bonding is a part of being an athlete, so is winning. “The team goal is to do well at meets,” she said.

Coach McCormick added, “Serious development as student athletes is always the goal, but so is rebuilding the program and representing SRJC.”

McCormick is accustomed to winning, with six state titles and eight conference titles in the program she has built. Among this year’s goals, she hopes to raise $1 million on an aquatics endowment along with the naming rights for the new 50-meter, Olympic-sized pool that is set to open this summer.

Standout swimmers to watch this season include freshman Ruby Gonzalez, who competes in the backstroke and sophomore Aiden Cummings, in men’s breaststroke. Emily Nightingale, another freshman to watch, has a background in competitive gymnastics. “She is quickly mastering the sport of diving,” McCormick said.