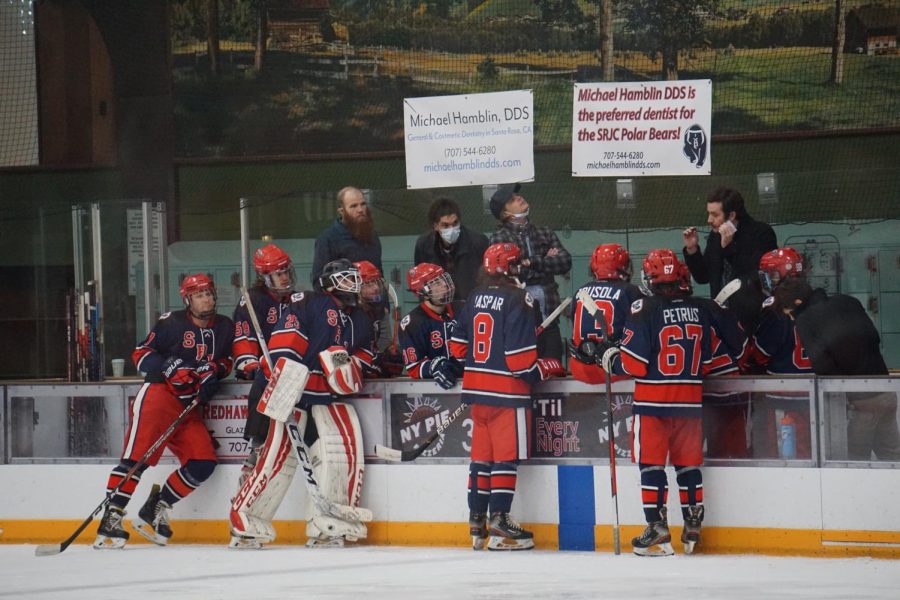 In their penultimate home game of the spring semester, Santa Rosa (11-5-1) was defeated by U.C. Davis (5-4-0) in a brutal match that saw Polar Bear defensemen Zach Zweber called for a 10-minute misconduct penalty after being assessed a five-minute major kneeing penalty.

Fan attendance was restricted for this game due to the new county mandate made Jan. 10 by Sonoma County Health Officer Dr. Sundari R. Mase. Fans could still watch on the YouTube channel We Want the Video, who stream Polar Bears home games.

The Polar Bears and Aggies went back and forth with shots onto the opposing team’s net, but both teams struggled to maintain good puck movement and possession between their opposing zones.

UC Davis forward Evan Rhoderick was called for a cross checking penalty with 1:36 into the first period. The Polar Bears didn’t capitalize on the power play and failed multiple times to set up an attack during their power play, which led to a shorthanded goal attempt by UC Davis forward Robert Polon.

Santa Rosa continued to press against UC Davis until Santa Rosa forward Andreas Meshcheryakov took a cross checking penalty with 12:53 left in the period. The Aggies set up a strong attack during their power play, but the Polar Bears killed the penalty.

Several minutes later, Santa Rosa forward Jonah Petrus took a cross checking penalty with 6:49 remaining, and soon after UC Davis forward Roan Linvill took a penalty, giving both teams 1:07 of 4-on-4 play. Santa Rosa forward Mason Siemsen was then called for a tripping penalty, which turned the 4-on-4 play into 4-on-3 play. Despite the penalties, neither team was able to score.

The first period ended with the Polar Bears in a0-0 tie against the Aggies, leading 17-12 in shots.

Play restarted with the Polar Bears and Aggies unable to score against each other’s physical defense.

With 3:49 remaining in the period, UC Davis defensemen Max Koenig scored a goal assisted by defensemen Anthony Goldhawk to tie the game at 1-1. Following the goal, UC Davis forward Linvill was called for another check from behind, which became a 10-minute misconduct penalty after some deliberation by the referees. The second period ended with Santa Rosa tied 1-1 against UC Davis.

With 12:40 remaining in the third period, Aggies forward Wyatt Moore scored a goal assisted by forward Cameron Stone and gave the Aggies a one-goal lead.

Emotions flared following the goal, and Polar Bears defensemen Zach Zweber was assessed a five-minute major penalty and a game misconduct for kneeing an Aggies player, who stayed down on the ice for a moment before getting off the ice on his own power.

UC Davis forward Evan Rhoderick retaliated with a roughing penalty with 10:52 remaining in the game. Santa Rosa pressed to tie the game but couldn’t get the puck past UC Davis goaltender Timur Katsnelson.

“[The game] was definitely a hard one to swallow, but I think we actually played really well,” defenseman Remy Caillot said. “We just didn’t capitalize on our scoring chances. We just need to stick to our game and keep playing the way that has brought us success this season.”