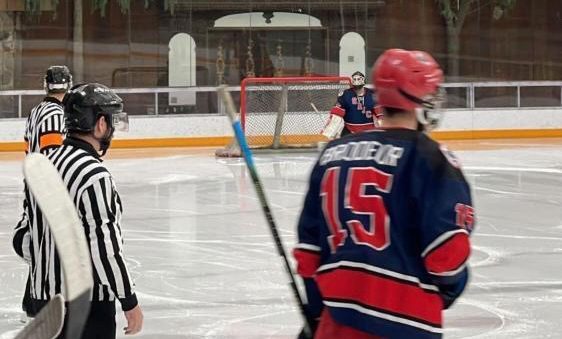 In the first game of the spring semester and their first since Dec. 5, Santa Rosa (10-2-1) beat Cal Lutheran (1-7-0) with a strong performance that included two shutout periods from Santa Rosa goaltender Alejandro Barajas and a hat trick from forward Grant Snetsinger.

The Polar Bears were originally scheduled to play the University of California Santa Barbara Gauchos on Jan. 14 and Jan. 15 as the first two games of the semester, but the Gauchos were forced to withdraw due to COVID-19 concerns.

The Polar Bears announced Jan. 11 that fan attendance was not allowed due to a Jan. 10 county mandate against large gatherings by Sonoma County Health Officer Dr. Sundari R. Mase. Fans could still watch on the YouTube channel We Want the Video, who livestream every Polar Bears home game. The typical raucous crowd noise was replaced by the sounds of skates on ice, sticks banging against the boards and coaches yelling instructions from behind the bench.

“One of the best things about playing for the SRJC hockey team is giving our community something to be excited and proud about,” Santa Rosa goaltender Alejandro Barajas said. “Not having our fans and supporters at the game eliminated that feeling.”

While the Polar Bears and Kingsmen had good puck movement between their opposing zones, both teams struggled to get shots onto the net. Despite that, Santa Rosa pressed and scored the first goal, beating Cal Lutheran goaltender Jamey Sinardi off of a rebound attempt goal by forward Grant Snetsinger that was assisted by rookie forward Toby Petrus and defenseman Angus Brodeur.

Cal Lutheran forward Tyler Verna was called for a roughing penalty with 15:11 remaining in the first period. The Polar Bears didn’t capitalize on the power play but controlled the pace throughout, including a slap shot attempt by defenseman Owen Hamblin.

Following the power play, Santa Rosa had continuous pressure in the offensive zone. With 12:28 remaining in the first, Santa Rosa rookie forward Toby Petrus scored to put Santa Rosa up 2-0.

Santa Rosa continued to press against the Cal Lutheran goaltender until Santa Rosa defenseman Owen Hamblin took an interference penalty with 7:08 left in the period. The Kingsmen tried and failed multiple times to set up an attack during their power play, but Santa Rosa killed the penalty.

Several minutes later, Cal Lutheran forward David Hewlett took a slashing penalty, and Polar Bear forward Grant Snetsinger scored his second goal of the night to go up 3-0 with 3:42 left in the first.

The first period ended with the Santa Rosa Polar Bears up 3-0 over the Cal Lutheran Kingsmen.

Early in the second period, a Kingsmen shot rang off the crossbar. The high pitched ping filled the desolate arena.

During a Polar Bears press, a shot rebounded awkwardly off the blocker of Kingsmen goaltender Sinardi and led to a net-front scramble for the puck.

Play restarted with a puck drop in the offensive zone and didn’t last long, as Polar Bears rookie forward Josh Kasper scored a goal assisted by forward Andreas Meshcheryakov with 14 minutes remaining in the second period. Less than 30 seconds later, Kasper scored again assisted by defensemen Angus Brodeur and Remy Caillot to give the Polar Bears a 5-0 lead over the Kingsmen.

The Polar Bears continued to dominate puck possession and fired more shots against Kingsmen goaltender Sinardi, but the Cal Lutheran defense held steadfast. With 8:12 remaining in the second period, Kingsmen defenseman Gabe Altieri received a cross checking penalty that led to a Polar Bears power play, their fourth of the night and another unsuccessful attempt.

The rest of the second period saw both teams going back and forth down the ice. With 1:05 remaining in the period, Santa Rosa rookie forward Romeo Brusola and Cal Lutheran forward Keith Walker were called for coincidental penalties. The second period ended with Santa Rosa leading 5-0 over Cal Lutheran and 55 seconds of 4-on-4 play left on the clock.

At the start of the third period, both teams battled for puck possession during the remaining 4-on-4 play. Neither team scored, but the Polar Bears were soon back on the penalty kill when forward Andreas Meshcheryakov was called for boarding with 15:51 remaining. The Kingsmen didn’t score during Meshcheryakov’s penalty but got another power play opportunity when Polar Bears defenseman Zach Zweber cross checked a Kingsmen player.

The refs called more penalties as emotions flared, including another two-minute 4-on-4 on penalties by Kingsmen forward Michael Cassera and Santa Rosa forward Grant Snetsinger. The intensity slowed as the clock ticked down, and with 1:41 remaining, Snetsinger scored his third goal of the game and completed the hat trick. The buzzer rang out and the Polar Bears beat the Kingsmen 7-1.

“Now that our first game is out of the way after a long break, we know that the rest of season will rely on our competitive spirits to bring us over the hump of not having fans at our home games,” goaltender Alejandro Barajas said.