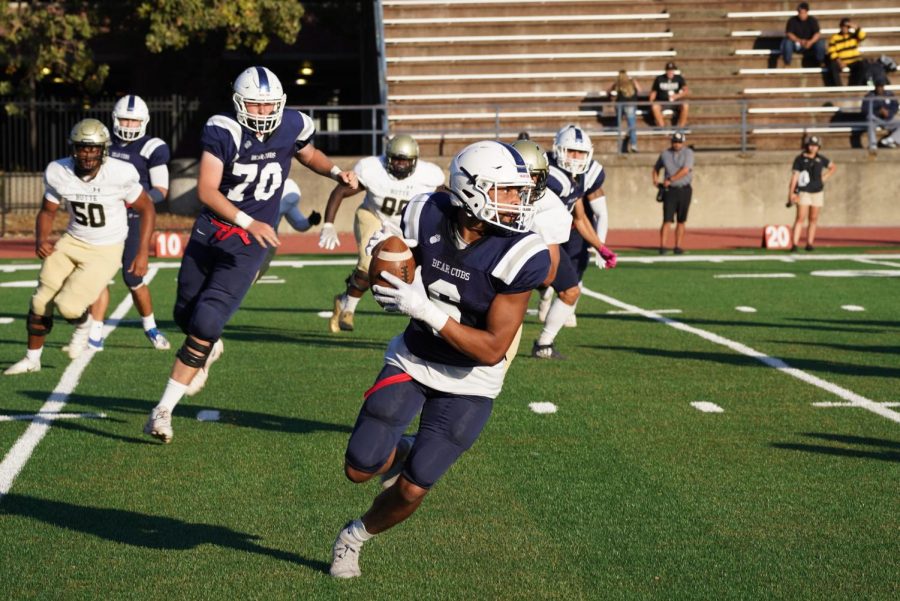 SRJC Bear Cubs wide receiver Micah Fontenot (6) catches a pass by quarterback Jake Simmons (3) in the Bear Cubs' second drive of the game and gets a first down to continue the drive at Bailey Field in SRJC's 29-21 2OT loss to Butte College Oct. 16.

Butte had a chance to win the game at the end of regulation, but was unsuccessful after kicker Gabe Estabrook missed a game-winning 26-yard field goal.

Both teams were able to score quickly on their first overtime possessions to even the game 21-21. But in the second overtime period, Butte scored again, while the Bear Cubs didn’t complete their last four throws.

SRJC entered the game with a 0-5 record in preseason, only averaging 10 points for and 37 points against per game. So far this year, the Bear Cubs have relied on their passing game, averaging 183 yards per game through the air and only 60 yards rushing on the ground.

The Roadrunners entered this game with a preseason record of 2-3 and have relied on their heavy, run-oriented offense this year. Butte has averaged 21 points for and 24 points against per game, with a tough 30-28 loss to Fresno City College in its last game.

The Bear Cubs started the game going three and out on their first possession, but a muffed punt by the Butte returner gave the ball right back to the Bear Cubs after they recovered the fumble.

Later on in the drive, SRJC quarterback Jake Simmons connected with wide receiver Micah Fontenot on a huge 40-yard bomb down the left sideline. Fontenot made a nice grab on the play, jumping right in front of the defender to make the grab, and stumbled into the end zone to give the Bear Cubs an early 7-0 lead.

Butte started the game in no huddle, quickly getting a first down on its first play, but players couldn’t do anything with the ball and punted right back to the Bear Cubs.

A big rush by Simmons kickstarted the Bear Cubs’ offense after turning the ball over on downs on their previous possession. However, back-to-back penalties pushed the Bear Cubs back and made it a first-and-25. A couple nice third-down conversions by the Bear Cub offense moved them into a goal-to-go situation where running back Adrian Torres scored the second touchdown for the Bear Cubs to put them up 14-0.

With 1:30 left in the second quarter, the Roadrunners got their first taste of offense when Butte quarterback Brian Harper connected with wide receiver Adam Bunch for a 37-yard pass down the middle of the field. From their own two yard line, running back Johnny Williams was able to rush in the first score for Butte, making the game 14-7 going into the second half.

This was the first lead at halftime for the Bear Cubs this season.

Butte started the second half with the ball and continued the momentum the team gained in the final minute of the first half. It was a nice, steady drive for the Roadrunners as they gained yards through the air and on the ground. Eventually, Butte faced a fourth-and-16 where the quarterback was unable to find any receivers down the field and ran the ball himself. Instead of running out of bounds, Harper stayed in bounds and ran his way into the end zone for a 36-yard touchdown that leveled the score 14-14.

The Bear Cubs were unable to do anything with the ball once they got it back. On fourth down, the Bear Cubs planned to punt the ball back to Butte, but it was blocked, giving Butte great field position.

Bear Cubs defensive end Deyonte Manning and cornerback Solento Smith made huge plays for the defense, putting tons of pressure on the Butte quarterback and forcing Butte to punt back to the Bear Cubs.

The Bear Cubs were again unable to do anything with the ball and punted back to Butte. The Roadrunners had a nice drive to get themselves in field goal range to attempt a 36-yard field goal, however, Smith made a huge play again for the Bear Cubs, blocking the field goal and giving the ball right back to his teammates in a huge momentum shift in the game.

On the next drive, the Bear Cubs drove the ball downfield thanks to a roughing-the-punter penalty on a Butte defender. Simmons converted a couple first downs through the air and another one with his legs. On fourth down, the Bear Cubs missed their field goal attempt.

With three minutes left in the game, Butte had a chance to drive down the field and potentially win the game. A couple plays into the drive, Harper connected with Bunch again, on the same play they connected on earlier in the game, to set Butte up in field goal range. Butte was able to drain the clock and set themselves up for a potential game-winning field goal. Before Butte attempted the kick, the Bear Cubs called timeout to ice the kicker. Estabrook hooked his kick left and the game went into overtime.

Butte won the coin toss and elected to go on defense first.

Butte had the first possession of the second overtime period and in four plays was able to score again. The Roadrunners tried for a two-point conversion that they scored on to make the game 29-21.

The Bear Cubs’ offense took multiple shots to the end zone in their final drive, but couldn’t complete a pass in four downs.

The Bear Cubs will play American River next weekend at 1 p.m. on Oct. 23 at ARC Stadium.