SRJC athletes gear up for first fall season since 2019 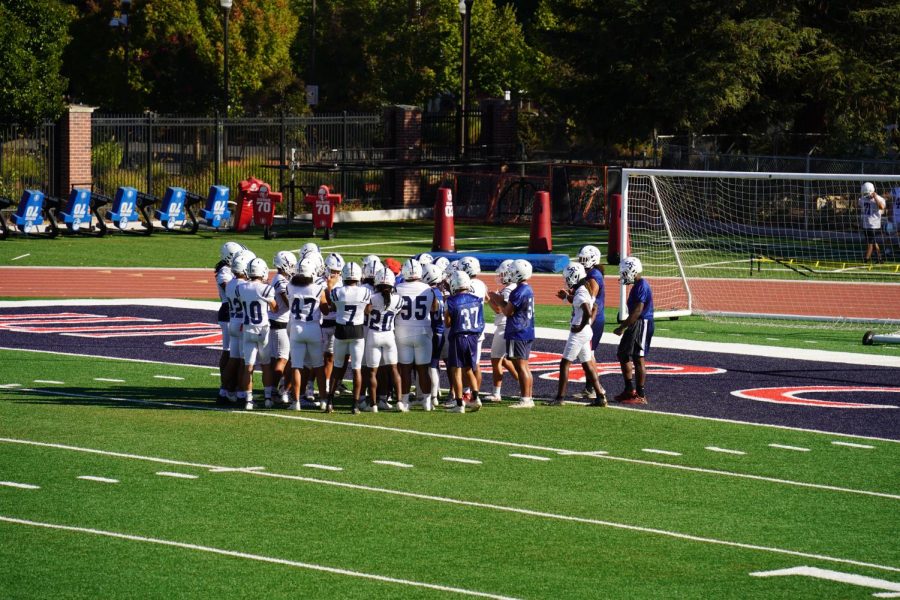 In his 37th year coaching, Head Coach Jake Fitzpatrick is one medal shy of coaching 100 wrestlers to state medals and 200 to dual medals.

It’s been a year-and-a-half since Fitzpatrick saw his wrestlers after the COVID-19 shutdown, and as a result, the team is six to eight members smaller than a year ago. Some of those wrestlers transferred to four-year schools, while others got jobs and are no longer attending SRJC.

Several other college wrestling teams were granted permission to meet and workout during the pandemic; some indoors, some outdoors.

“[It depends] on the county they live in, the politics and infection rates of the county,” Fitzpatrick said.

Out of the 20 California Community Colleges that wrestle, six had approval for spring wrestling teams, though that number wasn’t enough for competition.

This season, there’ll be no mask-wearing during competition as the team is fully vaccinated, and there haven’t been any cases of COVID-19, Fitzpatrick said. Before the team was vaccinated, wrestlers had to get tested every week. Fitzpatrick has told his wrestlers to be careful, wear a mask when around others and stay away from anyone showing signs of illness.

Among SRJC’s best performers is heavyweight Jacob Larsen, who comes into this year with a 10-2 record and nine pins out of those 10 victories. Larsen weighs 235 pounds but is competing at 285 pounds. He finished second at both the Sacramento City Tournament and the West Hills tournament.

Trevor Bagan, an academic All-American, was undecided whether to stay or transfer this semester. He returned but will transfer in January. Preston Bagan will transfer at the end of the academic year.

Jacob Larsen isn’t interested in transferring; he joined the team to improve his wrestling skills after coming from a judo background. He’s also learning how to be a better coach, as he’s an assistant at Maria Carillo High School.

The team is short-handed so the group’s chances of winning dual meets is thin. This year’s goal is to see how many wrestlers can get into the state meet, hopefully win medals and earn All-American honors.

Four women work out with the team, as SRJC has been trying to field women’s wrestling for five years. They will be wrestling at the club level in the spring. Some California Community Colleges have sanctioned women’s wrestling as a varsity sport, but SRJC hasn’t. Before the pandemic, six women were on the team, which finished second in the Western Regional Conference in 2019. The team is hoping to recruit a couple more women for the Spring semester so they can restart the women’s program.

Matches are open to spectators who show proof of vaccination or a negative COVID test within 72 hours and wear a mask indoors.
Women’s soccer
By Garrett Ashton

After just barely missing the playoffs in their last full season in 2019, the 2021 SRJC women’s soccer team is looking to take its solid 5-3 start and run with it.

Crystal Chaidez returns as head coach, her role since Spring 2015. During the missed season in fall 2020, Chaidez led skill and weight training over Zoom two days a week for the sophomores and some incoming freshmen to help them stay in practice.

This year the team has pressuring teams with a strong offensive focus through the start of their season, which began Aug. 27 with a 10-0 victory over Redwoods.

“It’s a very offensively minded group,” Chaidez said. “We want to continue to work on our defensive mentality and keep the ball out of our defensive net so we don’t have to put so much pressure on our offense to score more goals.”

Sophomores Katherine Monroy and Dominique Garzoli lead the team as captains this year; Monroy has four goals and 14 total points so far after nine games. The team is rounded out with other strong offensive threats, such as incoming freshman Abria Brooker, who currently leads the team in both goals (nine) and total points (19); Abril Vizzuett, another freshman with a great start, posting three goals and eight points, and goaltenders Megan Anderson and Taylor Brogden.

Now that they’re back on the field after the missed 2020 pandemic seasons, players have been doing their best to get into the groove.

“[This year] is kind of an adjustment year,” Chaidez said. “Everyone has not played in an official season, whether it be high school, club, or college, in a year and a half, so it’s kind of to be expected that our preseason was going to have some ups and downs. Our main goal is to start peaking when we hit conference next week.”

And as with so many high school and collegiate-level players around the country, they’re just glad to be back.

“As a team we’re thankful to be back out on the field together,” Chaidez said. “We’re thankful for where we are right now, but also we want to compete as a high level collegiate team.

The team is looking to continue its upward trend — winning four of five after losing two in a row prior — on Friday against Diablo Valley at Sunrise Park in Rohnert Park.
Football
By Tony Moeckel and Christian Vieyra

After missing the 2020 season because of the pandemic, the Santa Rosa Junior College football team looks very different from other years, with only six sophomores starting. All of those sophomores were on the 2019 team and are the only players who were previously on the team.

“We have a lot of freshman on the team, not redshirt freshman, but true freshman so it’s been a huge learning curve,” said Lenny Wagner, who is in his ninth season as head coach.

In 2019, the Bear Cubs finished 5-5, with an appearance in the Gridiron Classic Bowl Game, which they lost 36-20 to American River.

Even though the preseason has been difficult, the team still remains optimistic with conference play starting on Oct. 16 vs. Butte. Wagner said the Bear Cubs are in a tough conference. “Every week will be a big challenge,” he said.

The Bear Cubs have also dedicated their season to two fallen players, Rashaun Harris and Jason Evans. Harris was shot outside of his house on May 29, 2020 in Sacramento. Evans was killed in a motorcycle accident in San Francisco in June.

“We have tributed the season to those two guys. We have stickers on our helmets for those guys,” Wagner said. The deaths of two players has been hard for players and the team continues to talk about those players and use them as motivation. SRJC administrators granted the players honorary AA degrees.

COVID has been a huge factor for the team, as many players remain unvaccinated. “In the beginning of the season we had to quarantine every single week and we probably lost six weeks of preseason training,” Wagner said. Practice attendance would drop staggeringly day to day when a player contracted COVID-19.

“At one point we would have 120 guys out here, the next day we would have 35,” Wagner said. Having very little preseason training with a young freshman team and playing against some of the best teams in the state has not been a recipe for early success. These factors are compounded by key players being unvaccinated.

“There seems to be a correlation between a lot of really good players and not being vaccinated,” Wagner said.

However, playing against the top teams has given the players plenty of experience they hope to build on as they go deeper into the season.

Offensive lineman Resheed Wallace, cornerback Taylor Williams and defensive linemen Kevin Fisiiahi and TJ Tallamoni headline a small group of sophomores who are returning from the 2019 season. They have experience playing for the Bear Cubs for a season and look to lead this largely freshman team.

Quarterback Jake Simmons played for the Bear Cubs before transferring to San Jose State in 2019. Simmons redshirted his first year at San Jose State University and competed for playing time in 2020. Since 2020’s community college season was canceled, year of eligibility doesn’t count for Simmons, so he will use his sophomore season to play for the Bear Cubs.

Some freshmen have already stepped up for the Bear Cubs and solidified themselves as a big part of the team. Cornerback Solento Smith, defensive lineman Deyonte Manning and running backs Adrian Torres and Rasheed Rankin have all been very impactful for the Bear Cubs in their first five games.

The Bear Cubs’ offensive game plan looks different from the 2019 season under Vic Amick, offensive coordinator in his fourth season. In the 2019 season, the offense was run-heavy, averaging 177.6 rushing yards per game while the Bear Cubs only averaged 95 passing yards per game. This year the Bear Cubs look to run more spread offense to utilize the best players they have on offense. With Simmons back this year, the coaching staff plans to utilize his arm to throw more often than in 2019.

The Bear Cubs defense, run by defensive coordinator Dante DePaola, remains super flexible and changes on a week-to-week basis and depends on who their opponent is. The defense is changes depending on how much pressure they want to bring that week.

“The defense is anchored by their great defensive line which is the biggest strength of this year’s team,” Wagner said.

The SRJC men’s soccer team looks to contend in a very competitive conference, building on its 4-3-2 record so far.

“It’s gonna be a challenging season, but we’re up for the task,” Head Coach Marty Kinahan said. “Our strength is our defense; we have a really good back line.”

Players who have made an impact in the 2021 season include two freshmen, forward Alex Climaco and goalkeeper Emanuel Padilla. Climaco “is our essential player,” with four points this season, Kinahan said. “Everybody respects him as a player.

Padilla is “probably the best keeper in the league” with an astounding 23 saves this season. “He’s fantastic,” Kinahan said.

The pandemic has provided its fair share of challenges to everyone, including the Bear Cubs soccer team.

But Kinahan believes COVID-19 was more of a stressor for the team when it came to players being unvaccinated and having to deal with protocols. “It didn’t affect us as much as it stressed us out a little bit.”

When it comes to their schedule, Kinahan believes playing the best teams is good for the team. “I don’t want an easy game,” he said. “I would rather be in a tight game any day of the week. It’s a good challenge, we like it, we’re not afraid of it.”

When it comes to conference play, it does not get any easier.

“Our conference is always competitive, but I think this year is the toughest,” Kinahan said. Conference play has provided a positive outlook so far with eight conference contests left.

“We started off conference [games] fantastic,” Kinahan said, but the rest of the season will be a challenge. “It’s one of the toughest conferences; everybody’s good.”

The team is competitive but still has room for improvement. “We are playing too much defense; we need to play more offense,” Kinahan said. “We’re still searching for our offensive rotation.”

He added that the team needs “to be more dangerous in the final third, and we have to maintain 90 minutes of defensive mentality.”

Some struggles can be attributed to the team not having a normal offseason. “During the year off we basically didn’t have that routine and some guys are chasing fitness still, which is difficult to gain during the season,” Kinahan said.

Players also missed out on their team bonding trip because of wildfires. “Some of the stuff you do off the field is more valuable than what you do on the field,” Kinahan said.